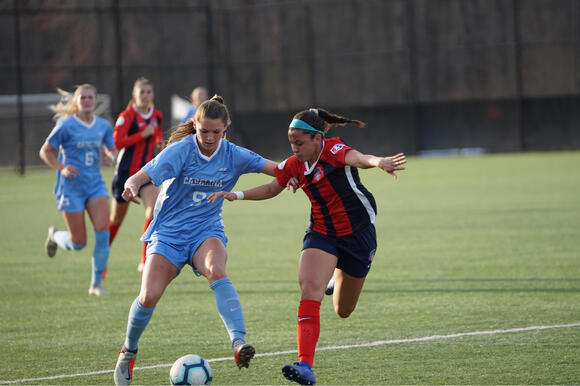 Jeffrey F Lin/Unsplash
HOUSTON — The Houston Dash defeated Kansas City NWSL 1-0 on Sunday, June 6, 2021, at 1 p.m. CT at Legends Field. This match was Houston's second in Kansas City this 2021 and third against Kansas City. Katie Naughton scored the only goal in the game in the 79th minute.

Prior to this game, the Dash triumphed against Alyssa Naeher, Kealia Watt and the Chicago Red Stars last Saturday 2-1 at home. It was their first victory in the season.

Houston did not play the captain, Rachel Daly, and their three Canadian players Allysha Chapman, Sophie Schmidt, and Nichelle Prince. They are currently in a training camp for the upcoming Olympic games.

The Dash will play the rest of the summer slate without six international players. On the other hand, two new players joined the Dash on the match, Jasmyne Spencer, a former OL Reign forward, and María Sánchez, Mexican international and Tigres forward.

This match is Dash's last before the next international break. The team's goalkeeper and co-captain, Jane Campbell, and Mewis will return to BBVA Stadium with the U.S. Women's National Team to face Portugal and Jamaica on friendly matches on June 10 and 13. Fans can buy the ticket on BBVAStadium.com.

The Dash will return to the field on Sunday, June 20, 2021, when they make their first visit to Lynn Family Stadium against Racing Louisville FC.

HOUSTON, TX — The Houston Independent School District has announced the appointment of Wanda Paul, a Houston native and a veteran business operations officer, as its new chief operating officer. Paul will begin her work in her new role on September 20.