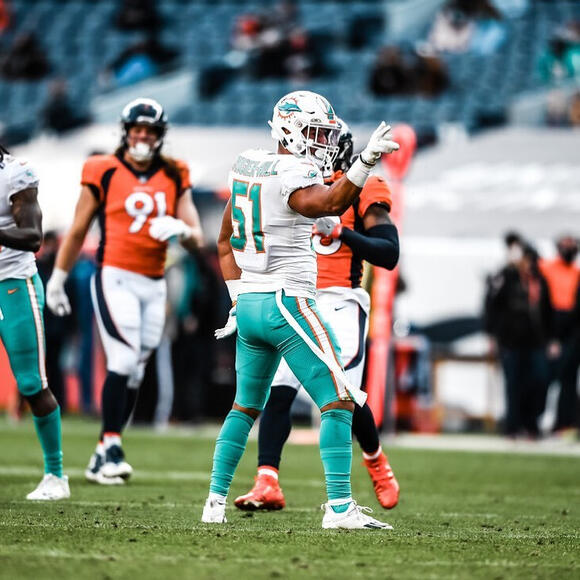 kamugrugierhill/Instagram
HOUSTON — Kamu Grugier-Hill will be on his sixth year in the NFL and his first year with Houston Texans this 2021 season, and the fast linebacker and special-teamer is confident about what the Houston Texans coordinator, Lovie Smith, has got in store for the Texans for 2021.

He had four seasons prior in Philadelphia and won a Super Bowl ring in 2017 and a 2020 campaign with Miami Dolphins. Kamu Grugier-Hill thinks that the Texans' defense will be fast this season.

"I just love the way Lovie runs his defense," Grugier-Hill said. "The guy's a legend. He really allows you to just be a player and play fast. For the first time in my career, I really feel like I can be used to my full capability."

Kamu Grugier-Hill, a Honolulu native, has played collegiately at Eastern Illinois, and in 2016 he was a sixth-rounder for the Patriots. After that year's training camp, he was a free agent for just a few days before he was picked up off the waiver wire by the Eagles.

The former Philadelphia special-teamer thinks that his speed will be a great fit with Lovie Smith's defense.

"I think I fit perfectly into it," Grugier-Hill said. "He likes speed guys. I can run and play the pass and do all that kind of stuff. I'm very excited for the future."

Kamu Grugier-Hill and the Texans just finished their second week of Organized Team Activities (OTAs) at the Houston Methodist Training Center and will continue the OTAs next week.

HOUSTON, TX — Are you looking for an educational place to take your children to, but you’re worried about getting into crowds? Look no further and find your destination at The Health Museum Houston.

What caused the flood in Houston and how often does it happen?

Houston, TX - There are some reasons as to why Houston is prone to flooding. One of them that might be surprising is the fact that the city itself was designed to flood. Most of the streets in Houston were made to be filled with water each time heavy rain poured. These streets have a higher center to make sure the water flows to the sewers. Although this system can be inconvenient, especially for driving, it has to be done in order to prevent the water from entering the houses and other buildings.

HOUSTON, TX — Ames Grawert, an alumnus of Rice University, has been a part of the esteemed Brennan Center for Justice, a nonprofit law and public policy institute based in the New York University Law School, for quite a while now. Back in 2016, he became a senior counsel at Brennan, and he conducts research on incarceration disparities while advocating for criminal justice reform.

University of Houston scientist weighs in on vaccine hesitancy in Houston

HOUSTON, TX — Not even 10% of Black adults in Houston have chosen to take the COVID-19 vaccine, and in the COVID-19 death rates, Black and Latinx adults are disproportionately represented. As one of the most diverse cities in America, trends show widespread mistrust of the COVID-19 vaccines among Black people and people of color, particularly in the underserved community of Houston.

HOUSTON, TX - The favorite restaurant of Texas A&M students, Laynes' Chicken Fingers opened its first Houston-area outpost complete with a drive-thru in Katy on June 26. Located at 23703 Cinco Ranch Boulevard, Katy, now locals can enjoy an authentic taste of the "soon to be famous" tenders that gained an early following on College Station.

HOUSTON, TX — Harmony Public Schools announced that it has officially broken ground to build a new high school campus for the Greater Katy community. This campus will be part of the several new Harmony schools opening throughout the state in Fall 2022.

“The Great Resignation” and its impact on Houston area workplaces

Houston, TX - There is an ongoing massive change in the market for national employment. According to the data from Greater Houston Partnership in Houston: The Economy at a Glance, job openings are hitting a new high with over 10 million in June.