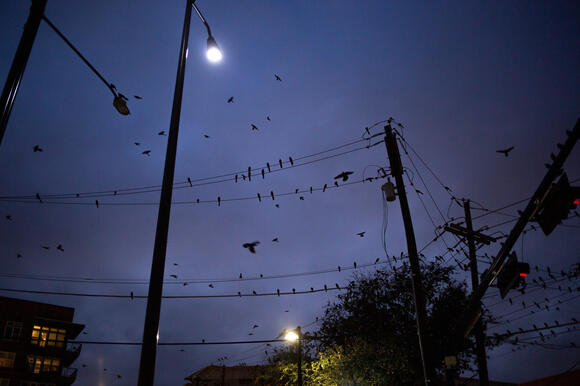 As migrating birds make their way across Texas this fall, Dallas Mayor Eric Johnson is urging North Texas residents and businesses to turn off non-essential lights at night.

"By taking this small step together, we can make a major difference for our environment," Johnson said.

About 80% of North American migratory birds make their journey at night. But bright city lights can distract them and lead to building collisions. During peak fall, migration leaders in major cities like Dallas, Houston, Austin, and Fort Worth are stepping in to help.

Mayor Johnson issued a city proclamation on Monday (Sept. 27) recognizing that city light is a threat to bird migration. He is encouraging Dallasites to dim or turn off lights between 11 p.m. and 6 a.m. from Sept. 27 through Oct. 17. Other cities like Fort Worth, Austin, and Houston are doing the same.

Of all the birds in the U.S., 1 in 3 migrate through Texas. Some of them include rail marsh birds, ruby-throated hummingbirds, and scissor-tailed flycatchers.

Lights Out Texas, a statewide initiative led by former First Lady Laura Bush, aims to educate people on the importance of dimming lights to help birds safely migrate. The program says it’s vital to protect birds because they help measure the health of the environment.

Research from the Cornell Lab of Ornithology estimates that as many as 600 million birds are killed annually due to light pollution, which disorients them and makes them more likely to collide with buildings. Dallas is one of the three deadliest cities for bird strikes, along with Houston and Chicago.

"Texas is the central flyway for bird migration," said Jacob Poinsett, program manager with the Trinity Audubon Center. "It is important to create a safe passage."

A study published in June revealed that turning off just half of the lights shining through windows during the spring and fall migration seasons could reduce fatal bird collisions by 60%.

Information from KERA News was used in this report.