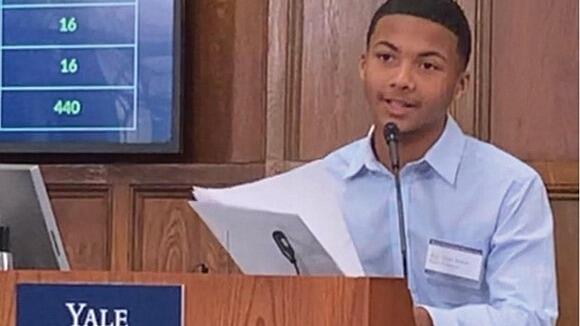 His teacher Valerie Schwarz recommended him to be one of the four students across the country to speak in front of an auditorium of peers, Yale University professors, and other faculty members. The four students represented English, science, and math curricula being taught in K-12 schools across the country. She said she saw early in the school year that Elijah was very comfortable speaking in front of others, and he had a real presence about him.

Richmond Public Schools is one of 11 school districts across the country selected to participate in the program. Teachers are required to apply to participate every year. Ms. Schwartz has represented Richmond as a Yale fellow in the program for several years, and she coordinates the student panel. Elijah is the first of her students to present on a unit she has instructed.

“I kind of said, I have a student and he has it. It’s kind of hard to say what ‘it’ was, but he has a presence, he has charisma.”

Elijah has a passion for space and science. At the conference, he shared things he has learned in this year’s school curriculum with a room full of people much older than he is. The topic of life on different planets, There’s No “Space” Like Home piqued Robins’ interest.

Public speaking is something that has always come naturally to Elijah. With support from his teacher, peers, and family, he described his experience as both exciting and nerve-wracking. He said he knew the end goal of showcasing his knowledge with others was going to be worth the pressure and hard work.

Women's soccerPhoto byJeffrey F LinonUnsplash. Current Virginia High School League (VHSL) regulations were enacted in 2014. Under those guidelines, 28 transgender students have applied and 25 have been granted the right to play on teams aligning with their gender identities.

George Santos steps down from his two committees, but says, 'I won't resign from Congress'

A day after a private meeting with House Speaker Kevin McCarthy, Republican Rep. George Santos of New York told GOP colleagues Tuesday, January 31 that he is temporarily stepping down from his two congressional committees. That move comes amid a host of ethics issues.

Virginia senators passed two gun control bills that impose new restrictions on guns. However, the bill will have to make it through the Republican-led House of Delegates. Virginia Senate voted 22-17 along party lines to ban the sale of so-called ghost guns, homemade firearms without serial numbers typically assembled using 3D printers.

Five Richmond Public Schools are proposed to be closed because of the budget. On Wednesday, February 1, 2023, Richmond School Board Member Jonathan Young plans to introduce a school consolidation plan during the school board’s budget work session. He says closing five schools would save about $5 million.

Increased deer population is a problem in Virginia

The deer population has increased in Virginia in recent years. It is not unusual to see deer in yards and walking across streets in front of traffic. Many complaints have been received statewide. However, nothing has been successful in decreasing the growing population.