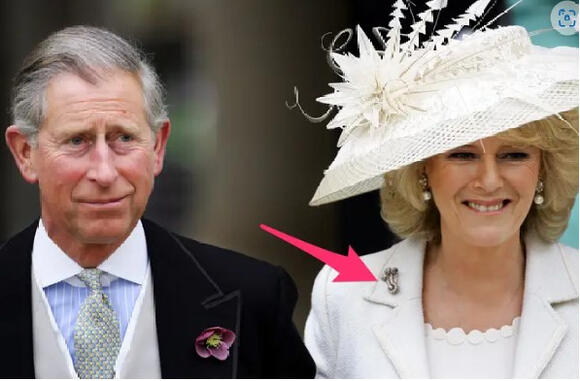 Camilla Queen ConsortADRIAN DENNIS/AFP via Getty Images
It is not unusual for people to sometimes send a message by what they are wearing. Members of the royal family do it more often than other people. The late Queen Elizabeth II usually paid tribute and sent messages with her outfits and accessories. Her daughter-in-law Camilla, the Queen Consort is known to do the same. Even though Camilla sent messages many times, below are only five of those times.

As seen in the photo above, the Queen Consort is wearing a brooch that Charles' great-grandfather King Edward VII bought for Camilla's great-grandmother Alice Keppel. The brooch featured feathers, a symbol of the title of the Prince of Wales at the time of their marriage in April 2005. It was Camilla's subtle message of bringing the two families together, according to British Vogue.

Camilla is seen pointing out her cream Chanel shoes with black toe caps made by a French designer when she welcomed President Emmanuel Macron of France to Clarence House in June 2020.

Camilla took over the role of Colonel-in-Chief of The Rifles from Prince Philip in July 2020. She attended the ceremony with The Rifles regiment of the British Army. Hello! magazine reported that she wore a green dress with black trim and black buttons that matched the regiment's uniforms.

At the Memorial Service of Thanksgiving for the monarch before her state funeral, Camilla wore a diamond brooch with a thistle, Scotland's national flower. It was a gift to her from Queen Elizabeth II, according to Insider's Mikhaila Friel. Queen Elizabeth inherited the brooch after the death of her mother in 2002. 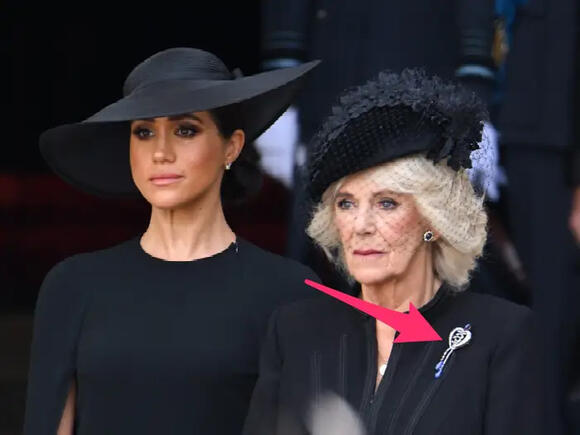 In the photo above, King Charles III is reaching with his left hand for his red box filled with important papers and documents. He has used the red box every day since he became king. The box has his royal cypher in gold. Queen Elizabeth II had her own red box with her royal cypher.

Tyler Perry's A Jazzman's Bluespremiered on Netflix on Friday, September 23, 2022. The 127-minute movie was written, directed, and produced by the talented filmmaker Tyler Perry. However, he is not one of the actors. The script for the movie was finished 27 years ago. In an interview with Sherri Shepherd on her new daytime talk show Sherri, Perry explained why he waited until now to launch the historical drama.

The oldest son of Queen Elizabeth became King Charles III following his mother's death on September 8, 2022. He is the oldest person in history to assume the British throne at the age of 73. He was the longest-serving heir in British history.

Sharon Osbourne says being fired from The Talk amid racism claims "destroyed my credibility in America." She also said she will probably never work again in the United States. Therefore, she and her husband Ozzy recently announced they are moving back to their native England from L.A., which has been their home base for 30 years. They will make a BBC reality show, Home to Roost, about their move back to the English countryside where they have kept a home.

Camilla Rosemary Shand, formerly known as Camilla Parker Bowles was born July 17, 1947. Following Queen Elizabeth II's death, there is no longer a British queen, but there is a queen consort. In the early years of Charles and Camilla’s marriage, it had been thought that Camilla would become princess consort upon the death of Queen Elizabeth. That changed in February 2022 when Queen Elizabeth issued a statement noting it was her “most sincere wish that, when the time comes, Camilla will be known as Queen Consort.” Queen Consort of the United Kingdom and other Commonwealth realms is the exact title that has been bestowed upon King Charles III's wife of 17 years.

Charles Philip Arthur George was born on November 14, 1948. He is now King Charles III of the United Kingdom and 14 other Commonwealth realms. He was the longest-serving heir in British history. At 73, he is the oldest person to ascend to the British throne. He was 9 years old when he was given the title Prince of Wales. He kept that title until September 8, 2022 following the death of his mother, Queen Elizabeth II. One of his first decisions was to keep his first name. Like popes, kings could change their names if they wanted to do so. He kept Charles because there were King Charles I and King Charles II.

Net worth of Prince George, Princess Charlotte, and Prince Louis

Prince William and FamilyKensington Palace/PA/WPA Pool/Shutterstock. Royal children do not technically have an official net worth. That's because they are kids and not working with money of their own. What royal children are worth is based on how much they add to the British economy. All three of the young children of William, the Prince of Wales and Kate, the Princess of Wales have a large impact on the British economy, according to CNNMoney.

The new movie The Woman King premiered at the box office on Friday, September 16, 2022 earning a surprising $19 million exceeding the $12 million that Sony predicted. The 135-minute Gina Prince-Bythewood historical drama, starring Viola Davis is based on the true events of the Agojie, the all-female army of the West African Kingdom of Dahomey in the 18th and 19th centuries.

Mark Zuckerberg used to be the third richest person in the world. According to Bloomberg, the billionaire's fortune has dropped by $71 billion. However, he still has $55.9 billion left.