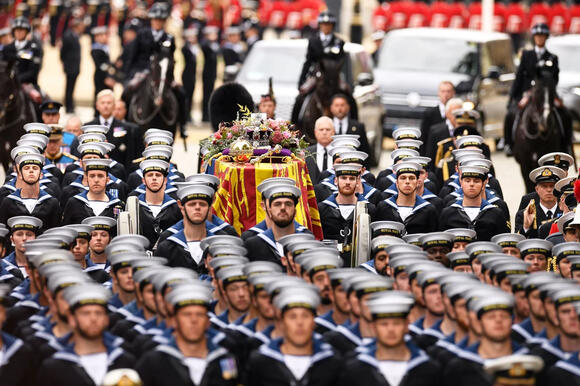 The state funeral of Queen Elizabeth II was held on Monday, September 19, 2022. It was watched by an average of 26.2 million people across all channels. It was one of the biggest broadcast collaborations in British television history. The Queen's funeral was a historic occasion that aired across many channels in the United Kingdom and throughout the entire world.

BBC, ITV, and Sky News worked together to provide coverage of major instances during the services and the processions behind the monarch's coffin.

Buckingham Palace has the power to veto certain footage as part of a broadcasting deal. This means certain parts of the coverage from the funeral services at Westminster Abbey and Windsor Castle will never be aired again.

Broadcasters including BBC, ITV, and Sky News all received notification from the royal staff regarding timestamped footage they don't want to appear in future broadcasts and on social media. Some broadcasters aren't happy about the deal, but they must honor that request and have agreed not to show at least five clips that the royal family requested to be removed from circulation, according to The Guardian.

Because the royal family has control over their press coverage and because of their relationship with the British media, some images and videos were considered to be unacceptable to be shown over and over again. All members of the royal family were grieving. However, clips that intruded into the personal grief of individual family members have been banned from re-airing.

Additionally, the public won't be seeing videos from the funeral on entertainment shows. A deal has been made with broadcasters for funeral footage to be used only in news coverage and for no other reason. There is a promise for social media clips to be "solemn and dignified" by broadcasters. Restrictions are in place for footage of the funeral not to be streamed on video platforms like TikTok.

Even though the public saw a lot of footage of the funeral, know that there was some footage that was not shown on the air. For instance, the footage was never aired of a man who charged at the Queen's coffin while the late monarch was lying-in-state at Westminster Hall.