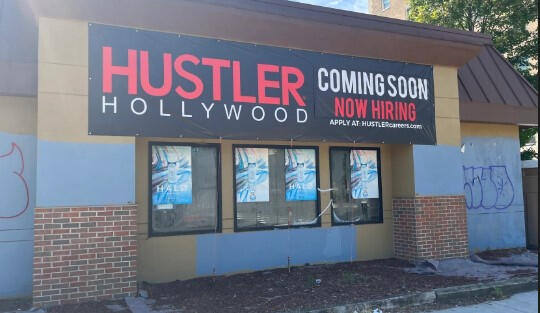 If the application is approved, Hustler Hollywood will be located in the place where the former Pizza Hut was across from the two museums at 2343 W. Broad Street in the Fan District.

According to the filing:

Danielle Ripperton, the Children’s Museum of Richmond’s executive director, and Richard Conti, the Science Museum of Virginia’s chief wonder officer, said in a joint statement that they are working to learn more about the store and questioned whether the shop’s location is in line with the city’s plans. Both museum leaders say this does not feel as if it is in the spirit of the city’s development goals.

Reaction from a city official

City Councilwoman Katherine Jordan represents the area. She says her office has talked with residents, neighborhood stakeholders, and city departments “to understand the relevant local laws and regulations and how they apply in this instance, as well as to ensure that they are being applied fairly and with all necessary due diligence.”

Jordan’s office told 8News that the Hustler Hollywood store doesn’t need the city council’s approval to open because it is not considered an adult entertainment business or adult bookstore. The application filed with the city defined the shop as a general retail store, according to the city’s Department of Planning and Development Review.

Do you think Hustler Hollywood will get the location the establishment has filed to get?

Camilla Queen ConsortADRIAN DENNIS/AFP via Getty ImagesIt is not unusual for people to sometimes send a message by what they are wearing. Members of the royal family do it more often than other people. The late Queen Elizabeth II usually paid tribute and sent messages with her outfits and accessories. Her daughter-in-law Camilla, the Queen Consort is known to do the same. Even though Camilla sent messages many times, below are only five of those times.

Net worth of Prince George, Princess Charlotte, and Prince Louis

Prince William and FamilyKensington Palace/PA/WPA Pool/Shutterstock. Royal children do not technically have an official net worth. That's because they are kids and not working with money of their own. What royal children are worth is based on how much they add to the British economy. All three of the young children of William, the Prince of Wales and Kate, the Princess of Wales have a large impact on the British economy, according to CNNMoney.

The new movie The Woman King premiered at the box office on Friday, September 16, 2022 earning a surprising $19 million exceeding the $12 million that Sony predicted. The 135-minute Gina Prince-Bythewood historical drama, starring Viola Davis is based on the true events of the Agojie, the all-female army of the West African Kingdom of Dahomey in the 18th and 19th centuries.

Mark Zuckerberg used to be the third richest person in the world. According to Bloomberg, the billionaire's fortune has dropped by $71 billion. However, he still has $55.9 billion left.

President Joe Biden and First Lady Jill Biden were the only two people from the United States invited to attend the state funeral of Queen Elizabeth II at London's Westminster Abbey on Monday, September 19, 2022. Dr. Jill Biden was dressed in a Maison Schiaparelli black suit. Some people on social media did not criticize the 71-year-old attendee for her suit, but they were quick to point out that she made a fashion faux pas by wearing a black fascinator instead of a black hat.

The state funeral of Queen Elizabeth II was held on Monday, September 19, 2022, in London's Westminster Abbey which had a seating capacity of 2,000. It was one of the biggest gatherings of world leaders in years. It brought closure to Britain's longest-reigning monarch who died on September 8 at age 96.

Kelly Clarkson is the latest to receive a star on the Hollywood Walk of Fame on Monday, September 19, 2022. The 40-year-old singer, songwriter, author, and talk show host became an instant success after winning the first season of American Idol in 2002, which earned her a record deal with RCA. That same year, her debut single, A Moment Like This, topped the US Billboard Hot 100, and it became the country's best-selling single of 2002.

Information about the upcoming State Fair of Virginia

The State Fair of Virginia returns to Caroline County, Virginia in full capacity this year. Because of the pandemic, there was no fair in 2020. In 202l, it returned but only on a limited basis. This is the first time the fair is returning to normal with all the traditional attractions, rides, live animals, farm equipment, crafts, and lots of food. There is much to see and do for adults and kids. There will be a petting zoo and pony rides for kids.

About 90% of all Americans who are age 65 and older currently receive Social Security benefits. Those benefits are about 30% of their total income. Therefore, it is important for retirees and soon-to-be retirees to know how their monthly benefits will change. According to the New York Times, the social security increase in 2023 will be the largest in four years.

Queen Elizabeth II died at 96 years old on September 8, 2022. Just days after the death of Britain's longest-serving monarch, people began buying souvenirs to commemorate her life and death. Royal-themed gift shops in London and online sites such as Amazon and Etsy began selling lots of souvenirs.

O'Charley's is a popular restaurant in four locations in the Metro Richmond, Virginia area, including Chester, Glen Allen, Midlothian, and Richmond. The popular national restaurant chain is about to become even more popular. That's because O’Charley's recently released its first-ever signature beer.

Queen Elizabeth's state funeral took place on the morning of Monday, September 19, 2022 inside Westminster Abbey where she was married on November 20, 1947, and was crowned on June 2, 1953, sixteen months after she became queen on February 6, 1952. The monarch died on September 8, 2022 at the age of 96. Marches, vigils, and many other events took place between her death and her funeral.

All cruise ships are required by law to carry a supply of body bags and have a morgue that will hold from three to six bodies. If a small morgue is full, then the crew will improvise and use a freezer until the ship gets to a place for the bodies to be disembarked. Most people don't realize that they will be traveling with a morgue when they book their cruise no matter which ship they choose.