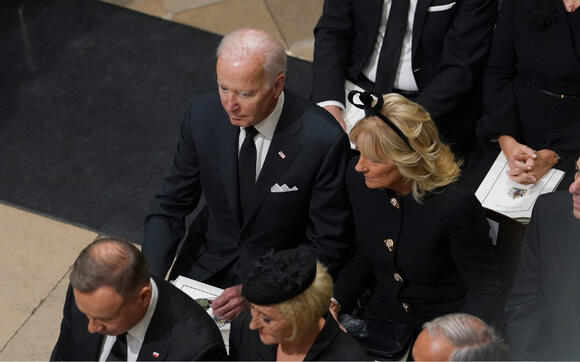 The state funeral of Queen Elizabeth II was held on Monday, September 19, 2022, in London's Westminster Abbey which had a seating capacity of 2,000. It was one of the biggest gatherings of world leaders in years. It brought closure to Britain's longest-reigning monarch who died on September 8 at age 96.

Because of space limitations, former living United States Presidents were not invited to the funeral. Donald Trump, Barack Obama, George W. Bush, Bill Clinton, and Jimmy Carter probably would have gone had they been invited. Only heads of state were invited. President Joe Biden and his wife, Dr. Jill Biden were the only two people from the US who were invited to attend.

Four of the presidents who were not invited accepted the Palace's choice and did not mock the current president who attended the funeral. However, one former president did.

More than 500 foreign heads of state, monarchs, and dignitaries attended the ceremony. Even so, former President Donald Trump claims he would have gotten a better seat than President Joe Biden at Queen Elizabeth II's funeral.

The Times of London reported that Biden and his wife were seated in the 14th row of the church's south transept, seven rows from the back.

Trump mocked Biden by posting a photograph on his social media platform Truth Social. The photo showed all the assembled world leaders sitting in the abbey. A red arrow pointed to Biden being seated near the back.

"If I were president, they wouldn't have sat me back there. In Real Estate, like Politics and in Life, LOCATION IS EVERYTHING!!!"

One hour later, in a separate post on his platform, Trump wrote:

"This is what's happened to America in just two short years. No respect!"

Seating due to protocol

While Trump took the time to mock President Joe Biden, he probably did not know that Biden had nothing to do with where he was sitting. A seating chart published by The Times of London shows that seating was arranged in the following order: the queen's family, monarchs, leaders of the Commonwealth, and other world leaders.

The Telegraph was quick to report that leaders of Commonwealth countries were put in front of other leaders "due to protocol."

United States President Joe Biden is not a member of the queen's family. He is not a monarch. He is not a leader of the Commonwealth. Neither is Donald Trump. Therefore, Trump's seat would not have been any closer to the front. At least Biden was in the building and Trump wasn't.

ABC's episode of Shark Tank which aired on Friday, December 2, 2022 was taped when Mark Lin was 17 years old and in high school. He is now a freshman at UCLA. He pitched his product, and all five sharks were impressed not only with his presentation but also with his impressive profits.

'GMA' hosts Amy Robach and T.J. Holmes have been taken off the air this week

If you are a viewer of GMA3: What You Need to Know, you saw that regular hosts Amy Robach and T.J. Holmes were missing from their lunchtime show on Monday, December 5, 2022. Hours ago unofficial reports went out that they would not receive disciplinary action. However, ABC executives have decided to take them off the air this week as they privately figure out the next step, according to RadarOnline.com.

Leaves in yardPhoto byShane Moreland/8News. Most people like to get rid of leaves from their yards and gardens as soon as they hit the ground. They don't want their neighbors to think they are not good homeowners if they let leaves pile up on their lawns or gardens. They rush to get rid of them by raking them, throwing them away, and even burning them to get the leaves out of everybody's sight. The Virginia Department of Forestry advises you to let the leaves stay where they are.

'GMA' hosts Amy Robach and T.J. Holmes won't be disciplined for dating on the job

Amy Robach and TJ HolmesPhoto byTwitter/ModAfroMama. Most companies have a policy against workplace dating. Since the news broke last Wednesday, November 30, 2022, Good Morning America has not commented on the reported Amy Robach and T.J. Holmes' relationship.

Disney Musicals in SchoolsPhoto bydisneymusicalinschools logo. Desirée Roots, artistic director for the community for Virginia Repertory Theatre, announced at the Perkinson Center for the Arts and Education in Chester, Virginia on Tuesday, November 29, 2022, that the organization has been awarded a grant from Disney to bring Disney Musicals in Schools, a program which aims to create "sustainable theater programs in under-resourced elementary schools."

Georgia Republican Lt. Gov. Geoff Duncan says Herschel Walker is one of the worst candidates in the party's history

Outgoing Georgia Republican Lt. Gov. Geoff Duncan was critical of Herschel Walker's Senate candidacy, according to a CBS News interview. In fact, he said:. "I think Herschel Walker will probably go down as one of the worst candidates in our party's history."

If you live in the Richmond, Virginia area and have never seen the global phenomenon Hamilton, you can get the chance to do it in the spring of next year when the performances will be at the Altria Theater from April 11 to April 23, 2023.

In a Saturday morning post on his Truth Social platform, former president Donald Trump calls for himself to be reinstated as President of the United States because of fraud. He also suggests a do-over of the 2020 election where Joe Biden was declared the winner of the title instead of him.

Identical twins win $1.5 million in damages after being accused of cheating on a medical exam

Identical twins Kayla and Kellie BinghamPhoto bymsn.com. Identical twins Kayla and Kellie Bingham were wrongly accused of cheating on a medical exam in 2016 while studying at the Medical University of Southern Carolina in Charleston. The medical school claimed that the similar scores they received on an important exam must have been because they cheated.

Herschel Walker and Raphael WarnoockPhoto byGetty Images. With just days to go before the Georgia runoff, Democratic Senator Raphael Warnock of Georgia has a slight edge in two new polls in a very tight race against Republican candidate Herschel Walker. The December 6 runoff is scheduled because neither candidate won more than 50 percent of the votes during the November 8 midterm election. The runoff election is expected to be very close again, according to two newly published polls from Emerson College and SurveyUSA.

TJ Holmes' wife was blindsided by the news of his affair

TJ Holmes and Marilee FiebigPhoto byBENNETT RAGLIN/GETTY IMAGES. GMA3co-host TJ Holmes and Atlanta-area attorney, Marilee Fiebig have been separated for six months, according to Page Six. Even so, Fiebig is devastated to learn that TJ has been having an affair with his co-host Amy Robach especially since they were working on their marriage so they could reunite. Fiebig is finding out about the news from photos and other details that have been posted online in the last few days like everybody else. Some say the former Chief of Staff at JAY-Z's entertainment agency, Roc Nation was “blindsided” by her husband’s relationship with his co-host.