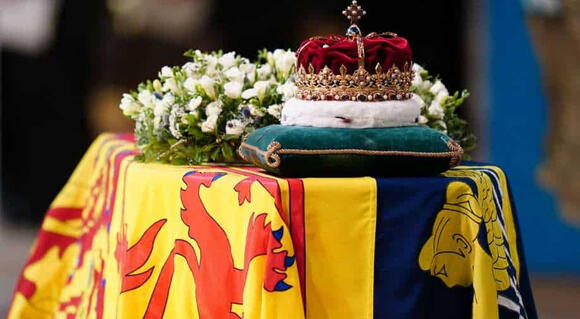 Queen Elizabeth's state funeral took place on the morning of Monday, September 19, 2022 inside Westminster Abbey where she was married on November 20, 1947, and was crowned on June 2, 1953, sixteen months after she became queen on February 6, 1952. The monarch died on September 8, 2022 at the age of 96. Marches, vigils, and many other events took place between her death and her funeral.

Because of space limitations, everyone who wanted to be there did not receive an invitation because the seating capacity is 2,000. About 500 world leaders and heads of state, including United States President Joe Biden and the prime ministers of Canada, Ireland, Australia, and New Zealand joined members of Britain's royal family at the funeral. Senior religious figures, British prime ministers past and present, and several other European monarchs attended the funeral of the United Kingdom's longest-reigning queen.

Other invited guests were individuals honored by the queen during her lifetime, including health workers.

The government declared the day a public holiday in Britain. Queen Elizabeth's lead-lined coffin left Westminster Hall where it has been lying in state for the last four days. The coffin was carried by a horse-drawn gun carriage of Britain's Royal Navy, alongside dozens of uniformed sailors. Members of Queen Elizabeth's large family followed the coffin in a procession.

The service was led by Dean of Westminster David Hoyle, with readings from Britain's new prime minister, Liz Truss, and a sermon preached by the United Kingdom's most senior cleric, the Archbishop of Canterbury, Justin Welby.

The service concluded with a version of Britain's moving military trumpet reveille, The Last Post, a 2-minute silence, and then a lament from the queen's personal piper, who played his Scottish bagpipes outside her bedroom every morning. King Charles III placed the camp color (a regimental flag) of the Grenadier Guards' Queen's Company, a British Army regiment, on his mother's coffin.

Following the funeral service, Queen Elizabeth's coffin was drawn once more behind the gun carriage and transported by hearse to Windsor Castle where a smaller service of about 800 attended. The imperial crown, orb, and scepter were taken from atop her coffin. Later that evening, her family held a private service when the monarch was laid to rest alongside her husband, Prince Philip, the late Duke of Edinburgh, who died last year at the age of 99.

Alec Baldwin posted a statement on Instagram that a settlement agreement has been met surrounding the accidentally shooting and killing of a cinematographer on the movie set of Rust. The announcement of the settlement comes almost a year after 42-year-old Halyna Hutchins was shot and killed by producer and star Alec Baldwin on October 21, 2021.

Virginia Tax RebateJeff Fusco/Getty Images) Residents of Virginia who file taxes are eligible for a one-time payment between $250 and $500 for each household, according to the Virginia Department of Taxation. Eligible taxpayers will be sent a one-time rebate of up to $250 for individuals and up to $500 for joint filers, according to local news in Virginia.

Hobby Lobby, Michaels, and Joann's Fabrics are three of the biggest arts-and-crafts retailers in the United States. Up until October 7, 2018, all three of those stores sold basically the same things, including spooky Halloween decor. Hobby Lobby is now the exception, and that craft store no longer sells Halloween items of any kind. Instead, Hobby Lobby shelves are filled with autumn-themed products, such as pumpkins, colorful leaves, hay bails, and dried corn. Those items can be used during the entire autumn season.

Kia and Hyundai cars being stolen because of a TikTok challenge

At least 18 cars have been stolen in the Richmond, Virginia area in the last two weeks. Police are investigating multiple thefts involving certain vehicles. The thefts are occurring because of the "Kia Boyz" challenge on TikTok that has gone viral. Even though adults can steal the cars according to the instructions, the challenge is geared toward teenagers. They are instructed to break into the car, pop off the steering wheel column, and hot wire the vehicle using a USB cord. That criminal activity takes only a few minutes.

The Department of Human Resource Management says the number of state employees working remotely has tripled since the pandemic started. Secretary of Administration Lyn McDermid said employees who have been approved to telework after Governor Glenn Youngkin’s back to the office directive took effect in July are up by about one-third.

Loretta LynnDonn Jones/Invision/AP) Loretta Lynn, a poor Kentucky coal miner's daughter who rose to fame and success as a country singer, has died at the age of 90. Her family says in a statement to the Associated Press that she died peacefully in her sleep at her ranch in Hurricane Mills, Tennessee on Tuesday, October 4, 2022.

'Barbiecore' is a hot pink fashion trend, especially among celebrities. The trend started at the beginning of this year. People are wearing pink in honor of the Barbie movie that isn't set to be released until next year. A lot of adults are fans of the iconic Mattel plastic doll whose outfits are mostly bubblegum pink.