Televangelist Joel Osteen baptizes more than 1,000 in a four-hour ceremony 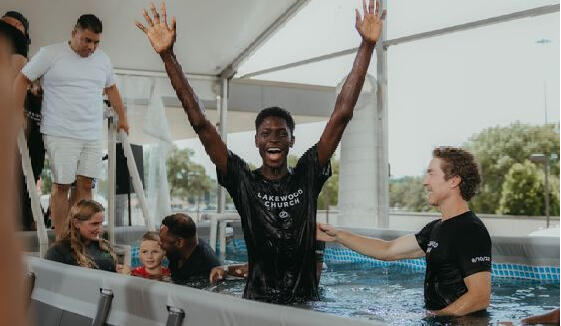 The pandemic kept pastor and televangelist Joel Osteen from baptizing people at his Lakewood Church in downtown Houston, Texas with a weekly attendance of 43,500. No baptism had taken place at the megachurch in over two years until Saturday, September 10, 2022. Needless to say, the number of candidates for baptism had piled up because the event had been delayed for so long. More than 1,000 people were baptized during a four-hour ceremony. During normal circumstances, the number is much fewer, and the ceremony is much shorter.

Baptism is one of the ordinances of the Christian church. In evangelical congregations, such as Lakewood, believers are usually immersed in water. That type of baptism follows the way Jesus was baptized by John the Baptist in the Jordan River, according to Matthew 3:13-17.

Those who were baptized were not only people from the Houston area. According to a spokeswoman for Lakewood Church, people traveled from 29 states to be baptized. The 1,000 number included 800 who were waiting to be baptized before the height of the pandemic. The remaining number occurred during the pandemic until televangelist Osteen deemed it safe to baptize again.

The long event was live-streamed so family members could witness the event from afar. The head of the megachurch was helped by another person to immerse every believer in the act of baptism. Many people jumped out of the water in jubilation from their experience as is seen in the above photo.

Reaction to the large number

Nick Nilson, one of the associate pastors at Lakewood, told The Washington Times in an email, “It is truly incredible and humbling to see so many people make this public declaration of their decision to follow Christ. It’s a moment they will never forget.”

The movie Inheritance was released on May 22, 2020, by Vertical Entertainment. It received negative reviews from critics then, but Netflix is giving the older movie a second chance. The movie premiered on Netflix on September 28, 2022. This time around, some people say they loved it while others called it one of the worst movies they have ever seen.

King Charles III hires piper to wake him up every morning

Pipe Major Paul BurnsPhil Noble / WPA Pool / Getty Images. King Charles III is following in his mother's footsteps in more ways than one. He has hired Pipe Major Paul Burns to wake him up with his bagpipes every morning at 9 a.m. just as he did for Queen Elizabeth II. Burns enjoyed playing every morning for 15 minutes no matter where Her Majesty was. He played his bagpipes for her whether she was in residence at Buckingham Palace, Windsor Castle, the Palace of Holyroodhouse, or at Balmoral Castle where she died on September 8, 2022.

Alec Baldwin posted a statement on Instagram that a settlement agreement has been met surrounding the accidentally shooting and killing of a cinematographer on the movie set of Rust. The announcement of the settlement comes almost a year after 42-year-old Halyna Hutchins was shot and killed by producer and star Alec Baldwin on October 21, 2021.

Virginia Tax RebateJeff Fusco/Getty Images) Residents of Virginia who file taxes are eligible for a one-time payment between $250 and $500 for each household, according to the Virginia Department of Taxation. Eligible taxpayers will be sent a one-time rebate of up to $250 for individuals and up to $500 for joint filers, according to local news in Virginia.

Hobby Lobby, Michaels, and Joann's Fabrics are three of the biggest arts-and-crafts retailers in the United States. Up until October 7, 2018, all three of those stores sold basically the same things, including spooky Halloween decor. Hobby Lobby is now the exception, and that craft store no longer sells Halloween items of any kind. Instead, Hobby Lobby shelves are filled with autumn-themed products, such as pumpkins, colorful leaves, hay bails, and dried corn. Those items can be used during the entire autumn season.

Kia and Hyundai cars being stolen because of a TikTok challenge

At least 18 cars have been stolen in the Richmond, Virginia area in the last two weeks. Police are investigating multiple thefts involving certain vehicles. The thefts are occurring because of the "Kia Boyz" challenge on TikTok that has gone viral. Even though adults can steal the cars according to the instructions, the challenge is geared toward teenagers. They are instructed to break into the car, pop off the steering wheel column, and hot wire the vehicle using a USB cord. That criminal activity takes only a few minutes.

The Department of Human Resource Management says the number of state employees working remotely has tripled since the pandemic started. Secretary of Administration Lyn McDermid said employees who have been approved to telework after Governor Glenn Youngkin’s back to the office directive took effect in July are up by about one-third.

Loretta LynnDonn Jones/Invision/AP) Loretta Lynn, a poor Kentucky coal miner's daughter who rose to fame and success as a country singer, has died at the age of 90. Her family says in a statement to the Associated Press that she died peacefully in her sleep at her ranch in Hurricane Mills, Tennessee on Tuesday, October 4, 2022.

'Barbiecore' is a hot pink fashion trend, especially among celebrities. The trend started at the beginning of this year. People are wearing pink in honor of the Barbie movie that isn't set to be released until next year. A lot of adults are fans of the iconic Mattel plastic doll whose outfits are mostly bubblegum pink.