I'm a Denver-based business writer with expertise in commercial and residential real estate as well as general business news. 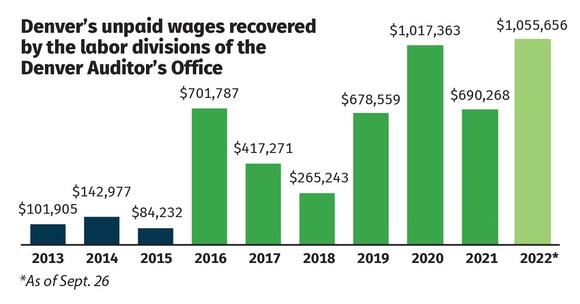 (Denver, Colo.) Denver Labor has put more than $1 million back into the hands of workers who earned the city’s minimum wage or prevailing wage this year but were paid less than the law requires.

“We are going to return a record amount of restitution to Denver’s workers in 2022,” said Denver Auditor Timothy O’Brien, whose office operates the Denver Labor division. “That’s money people worked hard to earn, but it didn’t go into their paychecks the way it should have.”

The Denver Labor team works with employers and employees to investigate and resolve underpayments related to Denver’s wage laws. The team prioritizes educating employers about the law and workers about their rights, but sometimes mistakes happen and workers get paid less than required.

“Every penny matters to the people who earned it,” Denver Labor Executive Director Jeff Garcia said. “I’m proud of the work my team is doing to help real people.”

So far, in 2022, Denver Labor has returned $1.06 million to workers. Additional restitution is pending or may be sent to collections by the end of the year.

The most recent restitution case involved a valet company in Denver. Because the valet parking industry is considered at high risk for underpayments, Denver Labor’s minimum wage team proactively audited the company’s payroll and found it was claiming a tip credit and paying some workers as low as $9.98 per hour.

After management was notified of the error, the company paid $73,595 in restitution to 98 employees.

“The new active enforcement approach helps us catch errors and work with employers earlier — before restitution becomes a larger burden,” Garcia said. “Denver’s minimum sage covers the lowest-paid people in the city, so moving quickly to get the money they are owed back in their pockets really makes a difference.”

I'm a Denver-based business writer with expertise in commercial and residential real estate as well as general business news.

Just BE Kitchen dishes up gluten-free food at Holidaily taproom

(Fort Collins, Colo.) Nectar Equities LLC paid $12.9 million for a four-building industrial complex in Fort Collins. The 73,170-square-foot Plum Tree Plaza, located at 2573,2579, 2601 and 2607 Midpoint Drive, was built in the late 1990s by WW Reynolds Cos. The property is 100% leased to four tenants and anchored by Larimer County government and life sciences company Indivior.

(Aurora, Colo.) Kids have a new place to call their own at Southlands shopping center in Aurora. The new children’s play area — dubbed Cub Hub — features year-round turf and hills for children, giant musical chimes and ample seating for parents to relax as their children play.

(Courtesy of Evermore Partners) (Boulder, Colo.) Evermore Partners has acquired a 33,296-square-foot office/flex building at 6707 Winchester Circle in Boulder. “The acquisition of this property is another great step for our company, and its acquisition goals,” Evermore Founder and CEO Seth Wolkov said. “As long-term believers in the Boulder area, we’re confident that this type of product will have enduring demand and relevancy. The combination of modern office layout, recently built life-science lab space, and dock-door-equipped distribution space will appeal to many tenants over time and provide good downside protection.

The seven-day fashion week event Nov. 12-20 will showcase up-and-coming fashion trends enhanced by the work of hairstylists, makeup artists and models. This year’s event will be hosted at Sports Castle — a Non Plus Ultra Venue at 1000 Broadway. The building, with an Art Deco-inspired facade, original stained glass accent windows and turn-of-the-century interior details allows Denver Fashion Week to offer various experiences to attendees.

(Courtesy of OZ Architecture) (Keystone, Colo.) The Keystone Resort base area is getting its first ski-in, ski-out hotel and condominium building. Kindred Resort broke ground Monday just steps from the ski area’s gondola in River Run Village. The project will have a Rock Resorts-branded hotel with 107 rooms and 95 residences with one to four bedrooms.

(Denver, Colo.) The CSU Spur campus in North Denver partnered with the U.S. Department of Agriculture (USDA) to host the North American Agricultural Advisory Network (NAAAN). NAAAN is a platform for North American nations to engage in a global dialogue on best practices for turning research findings into real-world agricultural innovations.

(Courtesy of Terminal Bar) (Denver, Colo.) Terminal Bar at Denver Union Station is hosting a Rare Beers & Good Vibes pre-party from 6 to 9 p.m. on Oct. 5 to kick off the Great American Beer Festival.

(Littleton, Colo.) Personal care and beauty product company Sephora celebrates its grand opening at Bowles Crossing Shopping Center from 10 a.m. to 8 p.m. Friday. The company will give away scratch cards and limited-edition tote bags during the event while supplies last. Prizes for the scratch cards are gift cards valued at $20, $50 and $100.

Non Plus Ultra adds The Brighton to Denver portfolio

(Courtesy of Non Plus Ultra) (Denver, Colo.) Venue operator Non Plus Ultra has added The Brighton in Denver’s RiNo neighborhood to its portfolio. With more than 75,000 square feet of indoor and outdoor space featuring 30-foot ceilings, The Brighton, at 3403 Brighton Blvd., can accommodate up to 5,000 guests or event builds of significant size.

Westbound & Down pops up in Denver’s Dairy Block

(Courtesy of Westbound & Down) (Denver, Colo.) Westbound & Down will hold a grand opening celebration for its popup location in Free Market at Dairy Block from 4 to 9 p.m. on Oct. 5.

(Denver, Colo.) The city could better protect itself from hackers if it managed third-party information technology vendors more comprehensively and centrally, according to an audit out this month.