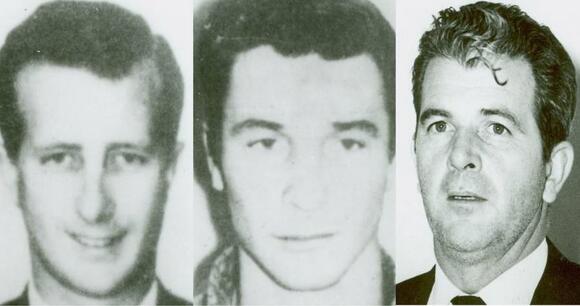 After his son’s kidnapping, the famous Frank Sinatra carried a roll of dimes in his pocket for over thirty more years until he died.

The crime of Frank Sinatra Jr.’s kidnapping shows that even the most famous of people are only human; they too are subject to frightening circumstances and the aftereffects.

Barry Keenan was the mastermind of the kidnapping. He was described as an “alcoholic, drug addict, and devout Catholic.”

Barry and his accomplice Joe Amsler were former classmates of the Sinatra children, specifically Frank Sinatra Jr.'s older sister, Nancy. Frank Sinatra Jr. was only 19 at the time of the kidnapping, and his kidnappers were just a few years older than him in their 20s.

Although Barry Keenan and Joe Amsler were the ones to commit the kidnapping, there was a third criminal involved: John Irwin. John was the one responsible for contacting the kidnapped boy’s father, the famous Frank Sinatra Sr., and demanding the ransom.

On December 8, 1963, days after the assassination of President John F. Kennedy, another tragedy struck: the kidnapping of Frank Sinatra’s son.

Frank Sinatra Jr. was just starting his own music career, and he was performing a small gig at Harrah’s Club Lodge in Lake Tahoe.

It was late in the afternoon and the singer was said to be dressed down to his underwear and eating a chicken thigh when the kidnappers knocked on his door.

A friend that was in the room with him answered it, and that was when Barry entered under the guise of a delivery. Barry Keenan and Joe Amsler tied up Frank’s friend then nabbed the singer, dragging him into a waiting car on the side of the lodge.

Frank’s friend actually managed to free himself and call the police, who set up roadblocks. The kidnappers were stopped by the cops, however, they managed to bluff their way past the roadblocks and get to their base in Los Angeles.

Frank Sinatra Jr. was held for 54 hours before kidnappers were able to communicate their ransom demands and the drop was made. But there was a hiccup during the ransom demands.

John Irwin, the man responsible for negotiating the ransom with Frank Sinatra Sr., insisted that they communicated using gas station payphones to avoid the FBI tracing the call.

When John Irwin and Frank Sinatra Sr. spoke on December 10, it became clear that the kidnappers were only interested in money. Sinatra Sr. was quick to offer it to them. He said, “I’ll give you a million dollars if you let my son go!”

It was while Frank Sinatra Sr. was on the phone with John, coordinating details for his son’s safe return, when something terrifying happened: he ran out of dimes for the payphone and the line went dead. Later, Sinatra Sr. openly admitted that he had “panicked.”

Thankfully, he was able to get back on the line with John. It was then that John demanded $240,000. Although that may seem a lot lower than a million, and it is, that is still the equivalent of two million dollars today.

On December 11th, Frank Sinatra Sr. made the drop at the specified location in California, and his son was released and found near Bel Air, unharmed.

The Arrests and Verdict

Defense for the three men claimed that Frank Sinatra Jr. orchestrated the kidnapping to gain publicity. This claim was the foundation for their entire defense.

However, the prosecutors and FBI had enough evidence to say otherwise and tear their claims to the ground. The evidence that the prosecutors found was a confession letter from Barry Keenan. It was located in a safety deposit box. As a result, all three men were convicted.

Barry Keenan, the mastermind of the kidnapping, was sentenced to twelve years of prison, however, he only served four and a half before he was released early.

After he got out, he made millions of dollars in real estate and owned multiple properties around the United States.

Besides the obvious reason that Frank Sinatra Sr. would be able to pay the ransom to get his son back, Barry had other reasons to target the 19-year-old.

In 1998, 35 years after the kidnapping had taken place and prison sentences were served, Barry Keenan agreed to an interview about the infamous kidnapping. What he told reporters was new information regarding the case.

He claimed that he had convinced himself at the time that it was an “act of goodwill.” In his eyes, there were two main benefits of the kidnapping:

In the interview, Barry said (regarding Frank Sinatra Sr.) that he had thought, “It wouldn’t be morally wrong to put him through a few hours of grief worrying about his son.”

A Roll of Dimes

After the kidnapping, Frank Sinatra Sr. had lasting trauma from the “panic” when he ran out of dimes mid-call with John Irwin.

As a result, he carried ten dimes with him at all times until he died. It became a sort of quirk of his. When he died and was buried, his daughter Tina Sinatra said, “He never wanted to get caught not able to make a phone call. He always carried 10 dimes.”

The Sinatra children made sure that their father was buried with a roll of dimes in his jacket pocket.