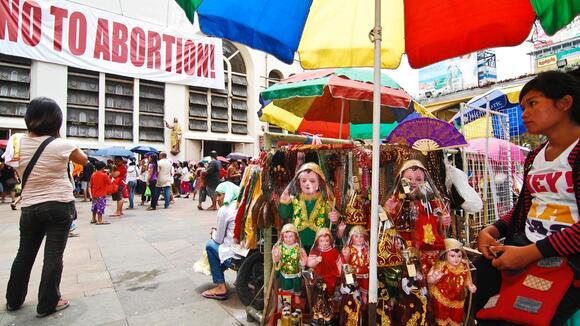 The government of the Philippines has soundly rejected the United Nations’ insistence that the country legalize abortion.

The United Nations Human Rights Council issued a recommendation to the Philippines urging the nation to legalize abortion, along with gay marriage and divorce. Speaking on behalf of the Philippine government, Justice Secretary Jesus Crispin Remulla said the recommendations were nonbinding and unacceptable to the country.

“It’s a matter of policy whether we accept it or not and I think we know as a country, we are not ready for that,” Remulla said in a briefing according to the Manila Times. He further described the recommendations as “unacceptable.” Justice Undersecretary Raul Vasquez added that the recommendations were rejected “because of national identity, our religious beliefs and our cultural traditions and the Philippine sovereignty that need to be protected and upheld at all times.”

The Philippines is a predominantly Catholic country where abortion has been illegal for over one hundred years, according to CNN, and whose constitution promises to “equally protect the life of the mother and the life of the unborn from conception.”

Although member states have raised real concerns about human rights abuses happening within the country, the Universal Periodic Review (UPR) chose to criticize the country for failing to “[take] steps to address the harms of the current abortion restrictions,” and further castigated the “proposition of government funded national programs and ‘pregnancy care centers’ that ‘promote childbirth as a viable and positive alternative to abortion’, and ‘extend support to entities… that assist women to choose childbirth and make informed decisions regarding the choice of adoption of parenting’,” arguing that “safe” abortion is necessary. Restrictions, they claimed, will “force women and girls to resort to unsafe abortions,” cause “grave physical and mental health outcomes and [lead] to serious violations of the fundamental rights of pregnant persons aggravating the vulnerability of certain population groups e.g. those living in poverty, with less educational opportunities, survivors of sexual violence, and adolescents.”

The UPR is a review of the human rights records of UN member states by other states – rather than by experts or authorities – within the council. This mechanism is supposed to “ensure equal treatment for every country when their human rights situations are assessed,” according to the Human Rights Council. However, in spite of the Philippine delegation accepting more than two thirds of the recommendations on their review, Remulla said he felt the process has been used to bully the country for having pro-life laws, stating that over 100 member states sided with the Philippines “in the human rights performance of the Philippines,” but that 15 member states “remained in the negative.”

“These are the usual countries that always pick on the Philippines. These are the rich countries from Europe that are very, very high on individual rights and have no notion of community rights. But I think we did very well,” said the chief Justice.

As Live Action News has reported, the United Nations declared, through a resolution in September, that abortion is a “human right,” and has gone on record in previous years calling pro-life laws “cruel” and “incompatible with international law.” In the past, the UN has made its influence felt by making desperately-needed COVID-19 relief funds contingent on committing abortion in certain countries with pro-life laws. However, despite these resolutions and the pressures put on other countries, according to C-Fam, abortion is a contested issue among the General Assembly and is not a part of any binding UN human rights treaty.

“Ideological colonization” is a phrase coined by pro-life activist Obianuju Ekeocha to describe the western pro-abortion agenda pushed upon developing nations in Africa, but it applies to other countries as well. Abortion colonizers, such as the International Planned Parenthood Federation (IPPF), have targeted countries in Central and South America seeking to undermine their strong pro-life cultures. Instead of providing aid towards health care, recommendations regarding social safety nets, or supporting pro-life pregnancy centers, the western ideological colonists seek to foist abortion on unwilling developing nations – something the Philippines is currently unwilling to tolerate.