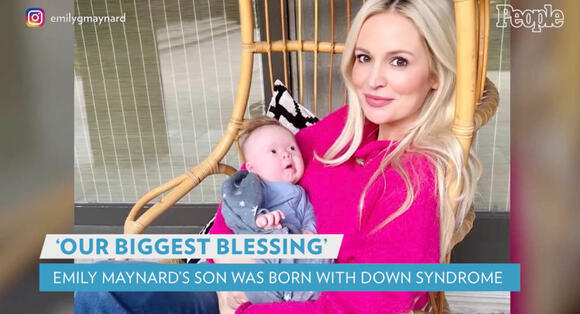 Emily Maynard Johnson, who starred on both the “Bachelor” and “Bachelorette” reality shows, has welcomed her sixth baby into the world — and he has Down syndrome.

Maynard Johnson was well known before reality TV, thanks to her relationship with NASCAR driver Ricky Hendrick. The two were engaged, but Hendrick died tragically in an airplane crash in 2004. Maynard Johnson only learned afterward that she was pregnant, and gave birth to a little girl she called Ricki — named after her fiancé.

After her stint on reality TV, she married Tyler Johnson, with whom she has had five children. Her latest bundle of joy, named Jones, was born in August with Down syndrome. She opened up to PEOPLE magazine about their journey. “I am so grateful,” she said. “But I’m still on my journey of processing everything. And I have to trust that it will all turn out alright.”

In a follow-up interview with PEOPLE, she explained that she never gets genetic testing during pregnancy. “You get what you get and you’re going to love it either way so there’s no sense in worrying about anything because it’s all going to work out and in the end, everything is going to be okay,” she said. “We did the anatomy scans, check the heart and brain and two arms, two legs, but no blood screenings.”

Because of this, Maynard Johnson had no clue that Jones might have Down syndrome. “I was in shock,” she said. “It was not on my radar at all. And I refused to believe it. I just wanted to hold him and for everything to be okay.”

Not only did Jones have Down syndrome, but he also had a colon abnormality that required surgery. He ultimately stayed in the NICU for a month, which Maynard Johnson said was devastating. “I was just grieving all of it and that the experience was so different from what I had expected,” she said. “Waking up the next morning hearing all the babies crying down the hallway while I was in the room alone, it hurt so much.”

Ultimately, though, Jones came home, happy and healthy, and Maynard Johnson is thrilled to have him as a part of their family.

“I realized this could be so much worse. This is nothing. This is joyful. Everybody that I’ve heard from shares how much love they have in their hearts,” she said. “He has the sweetest little smile and I’m just so excited. He’s so cute and he’s the easiest baby. I just know God is going to see so much good through this sweet baby. Especially because we weren’t planning on having a sixth kid, but with Jones, our family is complete.”

Meanwhile, daughter Ricki, now 17, was thrilled to celebrate her little brother. “She’s been my best buddy through everything,” Maynard Johnson said. “When I was in the hospital she sent me 47 roses to represent Jones’ 47 chromosomes.”

And while it was shocking and scary at first, she said now she wouldn’t change her son at all.

“He’s… just been our biggest blessing,” she said. “I’m still learning about Down syndrome, but I’m trying to also just experience Jones as Jones and not as different than any of the other kids… Looking back on my life, a lot of things happened that I wouldn’t have planned. But I wouldn’t change my life for anything. And I wouldn’t trade Jones for any baby in the world.”