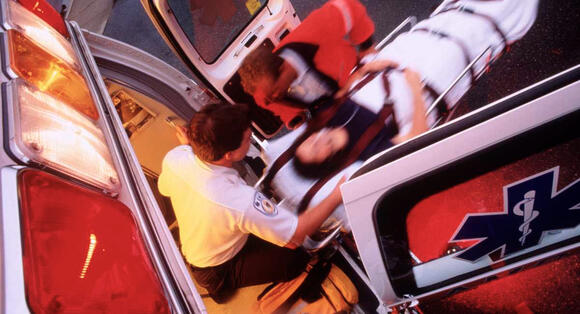 A woman was taken to the emergency room after undergoing an abortion in Chicago earlier this year — but this time, it was apparently not due to a botched abortion. Instead, the woman became suicidal afterward and was threatening to harm herself.

According to Operation Rescue, the 20-year-old woman had an abortion in April at Family Planning Associates Medical Group. Though the circumstances around her abortion are not certain, the 911 call requesting help made it clear that the woman immediately suffered a mental health crisis.

“We have a patient who just underwent an abortion,” the staffer said to the 911 dispatcher. “Everything is physically fine with her, but she is having a mental health crisis. She’s threatening, uh, suicide, she’s trying to harm herself… so we need to get her to a hospital.”

As is typical in abortion-related emergencies, the staffer tried to discourage emergency officials from responding through the front door, and was not forthcoming about the patient’s location until after being asked multiple times.

It is not unusual for women to experience this kind of instant regret or anguish after an abortion. In fact, it’s so prevalent that even some Planned Parenthood centers have kept grief journals in their recovery rooms for women to use after their abortions. Multiple former Planned Parenthood workers have spoken about how the messages in these journals were so emotional and painful to read that they couldn’t read them in full.

READ: Women recall the physical pain of abortion: ‘In any other situation it would be considered torture’

“The women would cry… 99% of people were not happy, and there were journals in the back room — in the recovery room — that the women were encouraged to write in, to kind of get their feelings out. And I could never read them in full because I cried too hard,” Crystal Eldridge, a former Planned Parenthood manager, said. She added that the women wrote about grief and regret, and “that they planted flowers in the rose garden for the babies, and that they didn’t want to have to do that [abortion], that they didn’t know of any other way.”

There are additionally thousands upon thousands of women who have spoken about the pain they feel after undergoing an abortion.

“This is just one of countless examples of the deep, emotional damage that happens in women after realizing they have taken part in the deaths of their own babies,” said Operation Rescue President Troy Newman.

Speaking on Radio One on the morning of November 27, 2022, Maltese Prime Minister Robert Abela claimed that abortion will remain illegal in Malta and that those who attempt to abuse new abortion legislation, still being debated in the Maltese parliament, will face penalties. The proposed legislation would provide exceptions (to protect the physical or mental health of the mother) to Malta’s current protections for preborn children.

A woman who originally thought she would never be able to have children has happily welcomed her 11th child — and incredibly, welcomed him on November 11th, or 11/11. Satu Nordling Gonzalez, 36, of Sweden, had a miscarriage at 21, which left her with uterine scarring. That, plus stress, reportedly caused her to have difficulty ovulating. Originally, Gonzalez gave up on the idea of having a child.

An Illinois man who shot and killed his pregnant girlfriend in front of her terrified young children has been sentenced to life in prison, charged with both the murder of his girlfriend and of their preborn son.

A Canadian man who had said he was considering euthanasia due to his potential homelessness has changed his mind thanks to an outpouring of public support, according to City News.

Police investigate discovery of babies’ bodies in a Boston freezer

Police are investigating after the remains of several children who appeared to be either fetuses or infants were found in a freezer in a Boston apartment. According to CBS News, police received a 911 call at 838 East Broadway. What prompted the call is not known at this time, but Boston police responded with homicide detectives to the scene. The medical examiner was then seen taking a small box out of the unit, which was said to be the body of a deceased child, either preborn or newborn.

The Senate Permanent Subcommittee on Investigations — a panel of the Homeland Security and Governmental Affairs Committee — released the results of an investigation on Tuesday detailing the medical mistreatment of migrant women in an ICE detention center in Georgia, including that they endured “excessive, invasive, and often unnecessary gynecological procedures.”

A commissioner at the Equal Employment Opportunity Commission (EEOC) has initiated an investigation to see whether companies providing coverage for abortion travel are engaging in a form of discrimination.

To all outward appearances Ayla Bashir is a normal, happy, 17-month-old child. She began crawling right on time, and today she stands and walks, plays with toys, and has started saying her first words and phrases. The reason she’s able to thrive today is thanks to a new way of treating her rare genetic disease — a form which is often fatal.

The Biden administration issued a directive last Thursday stating that unaccompanied migrant children in federal custody must have access to abortion. The Office of Refugee Resettlement (ORR), an agency within the Department of Health and Human Services that is tasked with housing migrant children, issued Field Guidance making it an official policy that unaccompanied children must be given access to abortion if they want it. The directive also states pregnant girls should not be sheltered in states with pro-life protections, like Texas:

Actress Ali Stroker uses pregnancy to advocate for those with disabilities

Actress Ali Stroker, who is paralyzed from the chest down and uses a wheelchair, recently announced her first pregnancy with husband David Perlow. In an October interview with Self, Stroker spoke candidly about her desire to use her pregnancy to advocate for people with disabilities.

Jennifer Aniston and the harsh reality of finite fertility

In the past, actress Jennifer Aniston has revealed her support for abortion (the legal ‘right’ to end the lives of the preborn children you don’t want), but she recently opened up about her own struggles with the other side of the fertility coin — the inability to have the children you do want. While the heartache that comes with infertility is understandable, individuals who have been conceived via artificial means have revealed the heartache and identity crises it has caused them. And women who go through fertility treatments learn the industry secret: IVF fails more than it succeeds.

Baby born at 23 weeks heads home with her family: ‘It’s a miracle that she survived’

A baby born at just 23 weeks and weighing 535 grams at birth has finally gone home with her parents. When little Isla was born on March 4, her parents Lauren Ormston and Oliver Dewey were told that she had just a 10% chance of survival.

In reaction to the Supreme Court’s Dobbs v. Jackson Women’s Health Organizationruling in June 2022 permitting states to again limit and even prohibit abortion procedures, surrogacy businesses have implemented new and more careful guidelines for in-vitro fertilization (IVF) to reduce potential abortions due to the fact that “selective reduction,” or abortion after IVF, is an often integral part of the process, according to surrogacy specialists.

Emily Maynard Johnson, who starred on both the “Bachelor” and “Bachelorette” reality shows, has welcomed her sixth baby into the world — and he has Down syndrome. Maynard Johnson was well known before reality TV, thanks to her relationship with NASCAR driver Ricky Hendrick. The two were engaged, but Hendrick died tragically in an airplane crash in 2004. Maynard Johnson only learned afterward that she was pregnant, and gave birth to a little girl she called Ricki — named after her fiancé.

A preemie who wasn’t breathing for an astounding 17 minutes after birth has made a miraculous recovery, and is now joining his family at home. Bethany Homar was 26 weeks pregnant when she suffered a placental abruption and had to have an emergency c-section to save her baby. Little Isaiah weighed just 1lb, 10oz when he was born. After birth, it took doctors 17 minutes of resuscitation before he started breathing on his own.

A teenager with spina bifida who was adopted as a child from China is thriving as he forges a new path in sports, showing the world he is not limited by his disability. Ryan Wolfe grew up playing soccer and basketball, but always had a passion for football. And now, as the team manager for Eastern Lebanon County (ELCO) High School in Pennsylvania, he’s able to fulfill that passion. But it hasn’t been an easy journey. In an interview with Lancaster Online, Wolfe and his family shared his remarkable story, which started with Ryan’s adoption from China in 2012.

Following a plea deal, a Texas man will faceno jail time for allegedly beating his pregnant girlfriend so severely that he caused the death of their preborn baby. According to police, Johnny Charles Ebbs V beat his pregnant girlfriend LaShonda Lemons in 2019, putting her in the hospital. Three days later, their preborn baby died and the cause of death was blunt force trauma that caused placental abruption, meaning the placenta had become detached from the uterus. The arrest warrant states that Ebbs punched Lemons in the stomach and screamed, “F*** you and this baby! You aren’t going anywhere!”

The first attempt in France to make abortion a constitutional right has failed, reports The Guardian. Though the government has said that it will back efforts to make France the first country to enshrine abortion in its constitution, the French Senate rejected the effort, with a vote of 172 to 139 on October 19.