She chose life for triplets with the help of a pregnancy resource center: ‘I’m thanking God’ 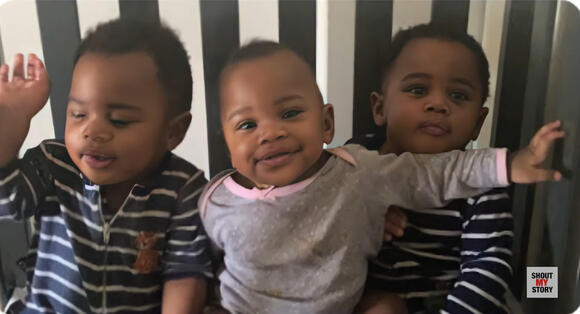 Even as smear campaigns and worse continue to barrage pregnancy resource centers across the country, the women who actually walk through their doors and receive material services and emotional support tell a different story.

In 2021, single mom Veltaasia Ivy learned that she was expecting… triplets. She told Shout My Story, “As I found out that I was pregnant, I was basically a single mom. I barely had somewhere to stay, I didn’t have an address to my name. Here it comes, you know, not just one baby that I’m fixing to have — it was three.” The mom of two older children — a daughter and a toddler son — Ivy felt unequipped to care for another child, let alone three children at one time. “In my mind, I just couldn’t pinpoint to be able to take care of these babies. I love my other two babies like crazy. For me, fixing to have triplets, it was a big stop on my life.”

Abortion-minded out of desperation

Struggling financially and feeling alone, Veltaasia felt abortion was her only option. “I honestly was not going to keep them. I had it in my mind deep down inside that I couldn’t do it. I didn’t have no help [sic].” That’s where a pregnancy resource center, Southside Women’s Services in a Chicago suburb, stepped in. “I came to Southside straight abortion-minded. What changed my mind was, I talked to the counselor and [she was] you know, very encouraging. They also told me ‘you’re not going to be alone. If you need anything, reach out to us for anything.”

That encouragement and support made all the difference for Ivy as she began to imagine the possibility of parenting her three preborn children. Her heart especially became more open after her eight-year-old daughter found the ultrasound images from the sonogram her mom had at Southside and rejoiced to hear the news of her siblings on the way. Ivy then began to feel excitement underneath all the fear and uncertainty she initially felt. “The joy on her face, you know, made me excited.”

She continued, “And then, as time went, I was amazed. I’m really carrying three babies. I would go to the doctor and I would see them on the screen and it was so beautiful. It was so beautiful that I got more happier, to even praise, to carry these babies. I’m thanking God that I had my babies.”

An unexpected turn of events

Sadly, Ivy’s doctor offered her the option of “selective reduction,” aborting one baby in an attempt to make caregiving for the other two more manageable.

“They offered to do the abortion because they felt that maybe I couldn’t handle three. They offered ‘You know, are you able to take on this task? Maybe, if you can’t keep three, you can keep the two.’”

The doctor’s “offer” reflects a devastating cultural mindset that sees eliminating innocent lives as the best way to eliminate hardship, and targets innocent preborn people for death rather than seeking to alleviate the desperate circumstances of their parents.

Ivy, while initially taken aback, adamantly refused abortion. “I wasn’t with it at all because you’re taking a life away right before my eyes. [The doctor’s suggestion] was hurtful, but… I decided to keep all three of my babies.”

Her babies are blessings

Ivy welcomed Ryan, Rhiann, and Rain into the world prematurely, and visited them every single day of their neonatal intensive care unit (NICU) stay. “Looking at them in the NICU with a lot of tubes, that hurt my heart to see. But again, that was still a blessing, because my babies were alive, breathing, and getting healthy. I was very, very, very proud of them. To this day, I’m very proud of them.”

“I definitely have a challenge of having my babies, all five of them. A lot of people will ask me, ‘how do you do that? How do you maintain? How do you carry? What do you do?’ All I can say is, ‘Prayer. Prayer really works.’” She also credits the help of her older daughter.

Words for other abortion-minded women

“If I had to sit with someone [considering abortion], I would really encourage them to love on yourself. You have to love yourself before you can give love. So once you love on yourself, give it to your baby. Encourage yourself to just say ‘this is my baby.’ You know, make it where you know that you have riches. We might not have the money, but you’re rich.”

Ivy’s story of strength and overcoming is just one among many that occur across the country every day. Amidst societal and, sometimes, even medical professional pressures telling women they can’t, pregnancy resource centers walk alongside women, showing them that they can. And that support continues long after the child (or children, in Ivy’s case) is born.

For sale: Abortion facility buildings are being closed and sold in pro-life states

The building that houses the grisly late-term abortion facility, Southwestern Women’s Surgery Center in Dallas, owned and operated by abortionist Curtis Boyd appears to have been put up for sale. In addition, Live Action News has discovered that multiple abortion clinic buildings are popping up on commercial real-estate websites just months after the overturning of Roe v. Wade by the Supreme Court.

UN resolution declares abortion to be a ‘human right’

The United Nations adopted a resolution this month stating that abortion is a human right for women and girls. Titled “International cooperation for access to justice, remedies and assistance for survivors of sexual violence,” the resolution’s primary aim is to condemn “all forms of sexual and gender-based violence” while “urging all countries to provide victims and survivors access to justice, reparations and assistance.” Within the resolution, abortion is defined as a right that should be readily available to victims of sexual violence.

After struggling with infertility and dealing with several failed rounds of IVF, a Utah woman naturally conceived identical triplets in what she is calling a miracle. 46-year-old Audrey Tiberius and her husband, Tyler, were already parents to four boys: Marcus, 13, James, 11, Christian, 9, and Max, 7. But, she told TODAY Parents, she had dreams of an even bigger family. “I always had seven in my mind — that was always my dream number,” she said. “But I didn’t think it would happen for me because of my age.”

Fresh off of his announcement of a new California website promoting abortion, Governor Gavin Newsom has placed billboards in seven pro-life states, telling women to come to California for abortions and using bible verses as well.

An Ohio judge has temporarily halted the state’s heartbeat law for the next two weeks while a lawsuit against the state proceeds. The temporary restraining order means that babies up to 20 weeks gestation can be aborted in the state until September 28th. The decision was made by Hamilton County Common Pleas Court Judge Christian A. Jenkins, who declared the law “unconstitutional” and granted the injunction because he believes the plaintiffs have a chance at winning their lawsuit.

The Pennsylvania Supreme Court has denied Governor Tom Wolf’s request to fast-track his lawsuit against legislation seeking to amend the state’s constitution to say that there is no “right to abortion” in Pennsylvania.

Since the overturn of Roe v. Wade, the Biden administration has committed the federal government, including the military, to promote abortion access in spite of significant pro-life protections in some states. However, a presentation by Gen. James McConville, the U.S. Army Chief of Staff, published this week is a sign of the limitations of the administration’s pro-abortion policies.

A ‘severe’ fetal diagnosis, an experimental surgery… and a miraculous outcome

Aleisha Christensen was overjoyed when she discovered she was pregnant with her first child. The 30-year-old had been anxious to start a family and she and her husband Rory looked forward to becoming parents. But when Christensen went in for a gender reveal ultrasound at 19 weeks, her world was suddenly turned upside down.

Planned Parenthood has finally released its annual report for 2020-2021, which reveals that its number of abortions committed, as well as its intake of taxpayer dollars, have increased again — rising to the highest levels ever recorded.

On August 5, Indiana Gov. Eric Holcomb signed pro-life legislation — Senate Enrolled Act 1 — into law, which will protect most preborn children in the state from being killed by abortion, and shut down abortion businesses in the state. In doing so, Indiana became the first state to enact such a law since the reversal of Roe v. Wade in June. In addition, on that same day, Holcomb also signedSenate Enrolled Act 2, which will “support the health of pregnant women, postpartum mothers, and infants.”

A City of Columbus abortion ordinance is allocating over $26,000 to Pro-Choice Ohio, originally founded as a NARAL affiliate (note: the national offices of NARAL were originally co-founded by eugenicists), to “examine” pregnancy resource centers and determine whether “residents of the City of Columbus have access to medically accurate and legal reproductive health information.” The City passed the ordinance as an emergency action along with additional pro-abortion measures.

Nearly 600 men in the entertainment industry have penned a brief letter to studio executives demanding that they fund abortion travel for pregnant employees due to the “imminent workplace-safety crisis created by the overturning of Roe v. Wade.”

A pro-life activist on Twitter asked for help when she encountered a mom facing an unplanned pregnancy who was considering abortion. With the help of some life-affirming stories, the mom chose life and canceled her abortion appointment.

OPINION: Now is the time to grieve the heartbreak of abortion… and champion life

Disclaimer: The opinions expressed in this article are solely those of the guest author. As I recently welcomed my first grand baby into the world, I was caught by surprise by contrasting emotions of exuberant joy over his birth, followed within weeks by an unearthing and re-cycling of grief related to a “choice” made over four decades ago. Turbulent emotions propelled me to an extended period of reflection, resulting in a deep, eruptive heart-cry for societal healing.