Will The Detroit Lions Commit To Running The Football?

The Detroit Lions for the last decade have been known as a team for passing the football instead of running it. Now, the Lions have invested much into the offensive line and running back core to help build a running game. Head Coach Dan Campbell has made it known they would love to be a physical football team that can run the football. On today's Lions Talk, Mike Kimber gives his opinion on if the Lions can be a team who runs in 2021. 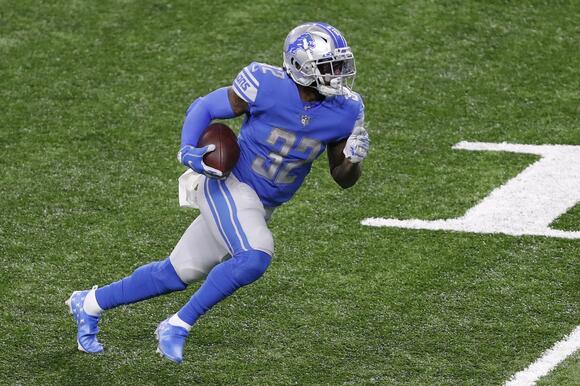 Video Analysis: Detroit Lions Selection Of Ifeatu Melifonwu At #101 In Round 3 of 2021 NFL Draft

Analysis: Detroit Lions Selection Of OL Penei Sewell At #7 In 1st Round of 2021 NFL Draft

VIDEO: The Detroit Lions selected Oregon OT Penei Sewell with the 7th overall pick in the 2021 NFL Draft. The Lions want to have a dominant offensive line to match the physical culture that Head Coach Dan Campbell wants to bring to the Lions. With Penei Sewell, the Lions are getting one of the best players in the draft who will protect Jared Goff and help the Lions run the football. Mike Kimber gives his initial thoughts on the selection as well what it means for the future of the Detroit Lions.

Video: 5 Players The Detroit Lions Could Select At Pick #41 In 2nd Round Of The 2021 NFL Draft

The Detroit Lions need much help all over the team to fill big holes such as linebacker, wide receiver, and safety. Multiple players who were considered first round picks have fallen to the 2nd round in which could be possible candidates for the Lions to select with pick #41. In today’s video, Mike Kimber breaks down 5 players who the Lions could select in the 2nd round featuring offensive and defensive prospects who fit GM Brad Holmes and HC Dan Campbell’s style in Detroit.

WATCH: Why Mac Jones Going To 49ers Would Have GREAT Implications For The Detroit Lions

The 2021 NFL Draft is nearly upon us and the Lions franchise is ready to add talent all over this football team to help build this roster correctly through the draft. Mike Kimber has created his final mock draft for the Lions. This mock draft includes trades, offensive players, and defensive players. With needs all over the roster, it was important to accumulate more capital to address the wide variety of needs for this team. Video via Chat Sports.

NEW Detroit Video: The Lions defense needs talent, and a LOT of it. One of the positional groups that is of biggest need is Safety. The Lions secondary was a point of attack for opposing offenses to target last season and the Lions currently are missing a high end quality ball hawk to make plays on D. Mike Kimber of Chat Sports breaks down 5 Safeties the Lions may target in the 2021 NFL Draft starting from round 1-5.

One of the least talented positions on the Detroit Lions roster right now is linebacker and on today’s News Break video, Mike Kimber breaks down potential targets for the new Lions regime to select in the upcoming 2021 NFL Draft. General Manager Brad Holmes and Head Coach Dan Campbell will be looking to upgrade the position on all fronts and hopefully turn a weakness into a long-term strength.

VIDEO: The Detroit Lions have a new regime in place and are looking to better the roster from top to bottom. With the NFL Draft coming here soon, new players will be placed on the Lions roster. Current Detroit Lions players who have not played to standard, need to worry about Lions GM Brad Holmes drafting their replacements. Mike Kimber breaks down 5 current Detroit Lions who must be concerned with their job status heading into the 2021 NFL season.

Trey Lance may fall to the Detroit Lions at pick #7. If the young QB does fall to the Lions, what will GM Brad Holmes do? Could Lance become a franchise QB, which could replace Jared Goff in the long-run? Mike Kimber breaks down this 2021 NFL Draft scenario on today's Lions Talk. Detroit's sitting in a good spot in this draft, and will have multiple options to either select a major talent, or to trade back to collect more picks.

Lions Draft Talk: What Should Detroit Do If QB Justin Fields Falls To #7

Justin Fields' draft stock has been up-and-down this offseason, and he may just fall to the Detroit Lions at pick #7. If the quality QB does fall to the Lions, GM Brad Holmes has a major decision to make such as selecting him and/or trading back with another team who might want to take him. On today's Lions Talk video, Mike Kimber breaks down this scenario for the Lions' 2021 NFL Draft.

NEW Video - Kyle Pitts may fall to the Detroit Lions at pick #7. If the elite TE does fall to the Lions, GM Brad Holmes has a major decision to make - select him or trade back with another team who covets Pitts. Mike Kimber breaks down each effect positive and negatively for selecting Kyle Pits or trading back with another team to gain capital. Hit that FOLLOW button here on News Break to get your Lions fix everyday!

NEW Lions Video - 2021 NFL Draft trade back options with Chat Sports’ host Mike Kimber. The Lions currently have the 7th overall pick in the 2021 NFL Draft and with only 6 total draft picks, the Lions could look to trade back to acquire more draft capital. This video will discuss what potential teams the Lions could trade with, what the compensation could look like, and what players would be available if they traded back.

NEW Video - 2021 Detroit Lions 7 round NFL Mock Draft with Chat Sports’ host Mike Kimber. In this mock draft, the Detroit Lions made a trade out of the 7th pick in the 2021 NFL draft to garner more capital to help build the team via roster. For Kimber, it’s important to fill multiple holes on defense and start to build a team with the vision of General Manager Brad Holmes and Head Coach Dan Campbell around changing the culture in Detroit.

VIDEO: The Detroit Lions have signed veteran safety Dean Marlowe to help beef up the Lions' young secondary. Marlowe, formerly of the Buffalo Bills, is a safety but also can be used as a nickel corner. With the Lions having a shortage of help at the safety position, the veteran adds quality depth for that spot. Mike Kimber breaks down what this signing means for the Lions going forward for the 2021 NFL season.

Detroit Lions Trade Rumors: Talks With Atlanta To Move To #4 To Draft A QB? Justin Fields Or Lance

VIDEO: The Detroit Lions have been mentioned as a team who could potentially move up in the 2021 NFL draft and trade with Atlanta Falcons. With 3 quarterbacks likely being selected as the top 3 picks, teams who want a franchise quarterback can trade with Atlanta to secure the player they want leading their team at pick #4 - if the Falcons are open to trading. The Detroit Lions do have the capital to move up if they want a franchise player.

The Detroit Lions signed veteran CB Quinton Dunbar to a 1-year deal on Monday. Dunbar will add depth to the Lions secondary and help guide the young secondary for the 2021 NFL season. In 2021, Dunbar played in 6 games for the Seattle Seahawks and recorded 1 interception, 5 pass defense, and 28 solo tackles. Mike Kimber breaks down what the signing means for the Lions NFL draft as well as the 2021 NFL season for the Detroit Lions.

The Detroit Lions have an opportunity to select a generational talent with the 7th pick in the 2021 NFL Draft. With the possibility of quarterbacks going early in the draft, Penei Sewell could fall to the Lions. If Sewell is available, the Lions should select him. He could solidify the Lions offensive line for years and give Detroit a potential top tier offensive line in the NFL. Mike Kimber gives his thoughts on Penei Sewell and multiple reasons why he should be the pick.

The Detroit Lions need all the secondary help that they can get, and veteran CB Quinton Dunbar has set up a visit with the Detroit Lions to potentially join the team. Dunbar, formerly of the Seattle Seahawks; could give much needed veteran presents to the Lions young secondary. Even though the Lions signed Corn Elder, they still need to fill holes. Mike Kimber gives his opinion on what Dunbar can bring to the Lions and what it means for the cornerback position in the NFL Draft.

Detroit Lions President Rod Wood made statements to the media that the they could be looking into changing the uniforms. But Wood also spoke about the Lions' interest in hosting the 2021 NFL Draft in Detroit. The Lions organization would like to bring a positive light to the Lions fanbase, and hosting an NFL draft could help. Mike Kimber gives his opinions on uniform changes and hosting the NFL Draft in 2024.