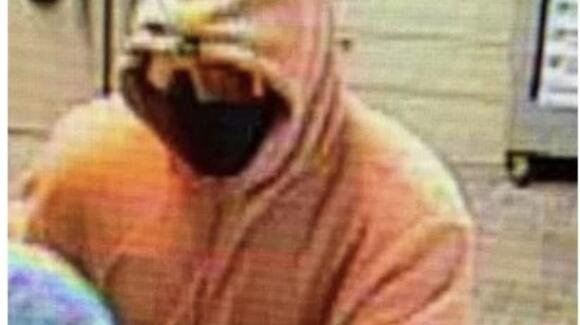 The Apple Valley and Savage Police Departments have announced they are both collectively investigating the two bank robberies that occurred on Tuesday, November 29, 2022, with help from the FBI. After further investigation, the two departments found the suspect from the first robbery at the Wings Credit Union in Savage, Minnesota, and from the second robbery at the Royal Credit Union in Apple Valley, Minnesota, were connected and the same individual. They also released a photo of the unidentified suspect, which you can see above and in the embedded Facebook post below.

Police ask if you have any information on this person, to please contact the Savage Police Department at 952-882-2600 or the Apple Valley Police Detective Horazuk at 952-953-2878.

The suspect was said to be male, 6'2", approximately 230 pounds, wearing a black ski mask and goggles, an orange and yellow jacket, and grey sweatpants.

According to the Savage Police Department, around 12:01 PM on Tuesday, November 29, 2022, a call came in for a bank robbery occurring at the Wings Credit Union at the 14400 block of Highway 13 South. The Savage and Prior Lake Police Departments, along with the Scott County Sheriff’s Office, all responded to the bank robbery report.

The suspect was able to get away before officers were able to arrive, but it was determined after further investigation a lone suspect had entered the bank, approached a bank employee, and began yelling at the employee, demanding money while pointing a handgun. When the employee advised the suspect that there was no money in the vault, the suspect exited the bank through the front door in an unknown direction without any money.

Following interviews with witnesses, police were able to describe the suspect as an unidentified male, approximately 6’2”, 230 lbs., wearing an orange and yellow sweatshirt, grey sweatpants, ski goggles, and a black mask covering his whole face.

At around 1:37 PM on November 29, 2022, a 911 call came in for a bank robbery at the Royal Credit Union located at 14295 Cedar Ave in Apple Valley, Minnesota. According to the Apple Valley Police Department, a male with a handgun jumped over the counter and had an employee open the vault. The suspect was described as wearing an orange construction-style jacket, dark pants, and a ski mask. He was said to be carrying a white grocery store-like bag. The suspect fled on foot prior to the officers' arrival.

Officers checked the area on foot and in vehicles and were not able to locate the suspect.

Again, police ask if you have any information on this person, to please contact the Savage Police Department at 952-882-2600 or the Apple Valley Police Detective Horazuk at 952-953-2878.