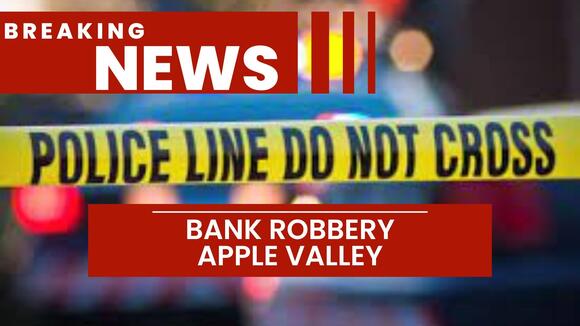 In an update just before 4 PM on November 29th, the Apple Valley Police Department released the following statement in regard to the bank robbery in Apple Valley, Minnesota, on their Facebook page.

On 11/29/22 at approximately 1:37 PM, Apple Valley officers were dispatched to the 14200 block of Cedar Avenue, Royal Credit Union, on the report of a robbery.

Officers checked the area on foot and in vehicles and were not able to locate the suspect. The investigation is ongoing.

APPLE VALLEY, MINNESOTA - According to scanner traffic from Dakota County Dispatch, at around 1:37 PM on November 29, 2022, a 911 call came in for a bank robbery at the Royal Credit Union located at 14295 Cedar Ave in Apple Valley, Minnesota. The suspect is said to be a male wearing an orange construction-style jacket, dark pants, and a ski mask. He was said to be carrying a white grocery store-like bag. Scanner traffic is reporting no money was exchanged in the interaction and that the suspect was seen going on foot northbound on Cedar Ave. The suspect reportedly had a black handgun with a silver barrel.

Police were unable to fly a drone to track the suspect due to the weather, as a snowstorm was ongoing. Police were able to follow tracks in the snow from the suspect in the snow. The police were able to follow the tracks until they got to Pennock townhomes located to the north-northwest of the credit union, where they lost the tracks. The rough last known location was in the area of 142nd St W and Glencove Trail in Apple Valley.

As of 2:30 PM, police are still searching for the suspect and have brought in K9s for tracking. We have reached out to the Apple Valley Police Chief for comment and more information in regard to the bank robbery. We will provide further updates as more information is made available. You are asked to call 911 if you have any information regarding this incident or happen to see the suspect.

The subject is again described as a white male wearing a black ski mask, a red sweatshirt, and khakis. He was last seen carrying a white grocery store-like bag.

The Savage Police Department is also reporting a bank robbery that occurred earlier today at the Wings Credit Union at the 14400 block of Highway 13 in Savage, Minnesota. According to the Savage Police Department, the suspect is said to be a male, 6'2", and approximately 230 pounds. The suspect was said to be wearing a black ski mask and goggles, an orange and yellow jacket, and grey sweatpants.

They also request if you have any information or see someone matching this description, please call 911.