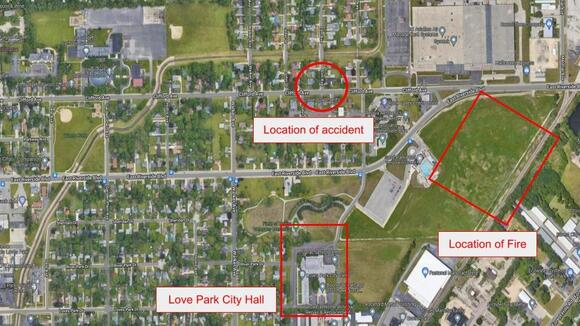 Map of where the events occurred in Love Parks, Illinois.Photo byGoogle Maps

LOVE PARK, ILLINOIS - It was an eventful tree lighting for the Cities of Loves Park and Machesney Park, Illinois who were hosting their 25th annual Christmas Tree Lighting, Fireworks, and Light Up the Parks Holiday Parade on Sunday, November 20th.

While the firework display was ongoing, a large grass fire reportedly broke out in the field surrounding the fireworks display with a handful of photographs and videos posted on social media from people at the event confirming the fire. A call came in for mutual aid from a number of area departments around 4:59 PM, according to scanner traffic. Due to the parade, several fire trucks were already in the area, but backup units were called in from North Park Fire Department in Loves Park, IL, Northwest Fire Protection in Rockford, IL, Harlem-Roscoe, IL in Roscoe/Machesney Park, IL, and the Love Park Fire Department. The firework display was located behind the Sand Park Pool off East Riverside Blvd in Loves Park, Illinois.

Around 5:20 PM multiple people observing the parade reported that a child walking next to a parade float/trailer had tripped and the child was run over by the trailer in the area of Elm and Clifford Ave in Loves Park, Illinois. Scanner traffic also confirmed this report with a child that was estimated to be around 5 years old. The young child was quickly brought to the side with North Park Fire and North Park Medics rushing him coming to the scene of the incident and then rushing the young boy to an area hospital to be evaluated. He is reported to be okay.