The fascinating mystery of colorblindness

Colorblindness afflicts about 8 percent of men and just 0.5 percent of women

If you believe your favorite t-shirt is brown yet others insist it is actually green, or if you're tearing your hair out searching for your missing 'purple' folder only for your family to find it and tell you it is, in fact, a blue folder - chances are you are colour blind.

Colour blindness is an affliction that affects around eight percent of males and just 0.5 percent of females. Most people who are color blind are not entirely color blind because they can still see colors; but they see only a narrow range of colours.

It's more accurate to say they have a colour deficiency or colour weakness, rather than a blindness. Vanessa Honson, Optometrist from UNSW Optometry Clinic said the most common form of color blindness is an inherited condition affecting the X chromosome, and this is present from birth.

Congenital colour deficiencies can be classified as mainly protan or deutan, she said.

Protan deficiencies refer to either the loss of 'red' pigment in photoreceptors or a modified red pigment. Similarly, deutan refers to the loss or having a modified 'green' pigment.

"People with these colour deficiencies are not 'blind' to red or green colours, but rather all colours look different because the 'red' or 'green' input is less and therefore the range of colours is much smaller," Honson said.

There's a simple test you can take to see if you have any colour deficiencies. Optometrists usually conduct a book test, called the Ishihara Test, with plates consisting of coloured figures made up of many spots. These figures act like invisible ink to people with colour problems and it is hidden amongst the background spots.

If you can see the number in these circles, you are not likely to be color deficient. 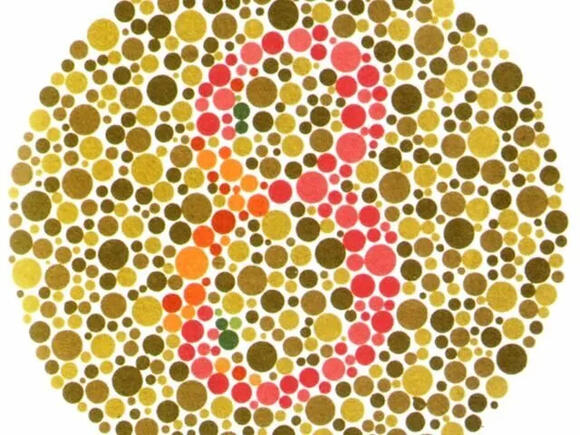 Australian Optometry: A typical eye chart to test whether you are color blind

Some colour deficiencies can also be acquired from eye diseases, general systemic diseases, toxicity from some drugs, or in general from the crystalline lens in the eye as we age.

If you discover your child is colour deficient, it's important to be aware that there are some careers they wouldn't be able to pursue. Honson said top of the list of careers to avoid are those in aviation.

"The aviation industry requires good colour vision, such as being a pilot or air traffic controller; being in the defence forces; maritime industry; railway workers, particularly train drivers and signal operators; police (both state and federal) and electricians," Honson said.

"I'd encourage parents to give their kids more cues such as telling them the colors of objects (rather than asking them for a colour) when they are younger. Let their teachers know, so strategies and a better understanding can be in place in the classroom. One example of this can be photocopying anything that is hard for that child to read e.g. green print on white can look very faint. Label coloring pencils if necessary, and still encouraging drawing and creativity; they still see colors."

While there is no cure for color blindness, Honson said it doesn't mean that some 'tinted' lenses cannot help, as certain tints may enhance contrast between colours that can otherwise look the same.

So an orange-red ball on a green lawn that does not stand out to someone with a color deficiency, will suddenly look brighter if seen through a 'reddish' tinted lens.

"So, the tinted lenses can reduce glare and also make a scene look more vivid in some cases, but no tall, and lighting variations will also affect the effect. Tinted lenses in low light conditions is not recommended," Honson said.

Your local optometrist is a good starting place for screening eye problems, including checking for color vision loss, and this can be carried out with all children before they begin school.

EnGeneIC has secured a deal with one of the world’s richest doctors for its Covid vaccine and a revolutionary cancer treatment. Two decades of hard work has resulted in EnGeneIC's ground breaking technology that has the potential to transform how life threatening illnesses are treated.

Wall St Rank helps investors by giving them access to Wall Street's investment informationWall St Rank/ Supplied. When the founder of Wall St Rank Amrit Rupasinghe noticed a distinct rise in the number of people turning to Tik Tok and YouTube during the pandemic, looking for “expert advice” about investing, he realised he had an opportunity for a much-needed new business.

Stormseal weather proofs buildingsSupplied/Stormseal. Residents recovering from the aftermath of Hurricane Ida are thankful for an innovative U.S. Army program - with support from friends ‘down under.’

We'd all like our work to be simple, consistent and rewardingMimi Thian/Unsplash. Whether you’re managing a team of workers, you're working on your own or simply a customer, there are a variety of roadblocks that make for a less than ideal experience when it comes to flow.

Bionic Vision Technologies has created a "bionic eye."Daniil Kuželev. An Australian tech company is changing the lives of blind people with a bionic eye, restoring functional vision, in a similar way to how the cochlear implant restores hearing.

John Killick was in Sydney's Silverwater Prison. Lucy couldn’t live without him so she hatched a daring plan to break him out that remains one of the most spectacular prison breaks in the world.

The Claw of Chernobyl: most dangerous thing in the exclusion zone

Forgotten in time, this creepy relic known as ‘The Claw’ is so dangerous only a handful of people know where it is. The Claw was used to dismantle the Chernobyl nuclear power plant and other radioactive areas. It is still so irradiated that, 30 years on, touching it could prove lethal. Picture: R Maxwell. Source:Supplied.

Why royal in-breeding was once considered "perfectly normal"

Europe has been controlled by royal families for hundreds of years, setting up strategic marriages to boost the number of their allies. But sometimes these unions resulted in inbreeding, which meant family illnesses were easily passed down the bloodline, as well as any deformities.

The man who filmed his own death at Chernobyl

There were many who risked their lives after the Chernobyl disaster — but none more so than a man desperate to show the world what happened. An aerial view of Reactor 4 after the explosion.Source:News Limited.

Mad King George III: was he really insane or was he suffering from an undiagnosed disease?

For centuries the rumor of the “mad King” has haunted the history books and finally the answer surrounding his sanity has been revealed. "King George III in coronation robes" painting by Allan Ramsay.Source:supplied.

Buffalo-born musician with South Carolina roots Edalo will be the headline act at The Tin Roof in Charleston, October 5. With live music on the rise again, Edalo’s excited to do his part by playing a live-set show at The Tin Roof; he's announced an East Coast Tour for Fall and will headline in 10 cities across America’s East Coast.

A preliminary report is giving the public a closer look at racial disparities in the North Charleston Police Department’s practices. CNA, the third-party organization hired to conduct the Racial Bias Audit of the North Charleston Police Department (NCPD), released preliminary findings of the investigation Monday, giving the public a chance to provide input.

Some police officers are feeling unappreciated by their communities@Live 5 News. Around a third of all law enforcement officers are leaving their jobs due to low morale, at a time when the State Law Enforcement Division reports an increase in violent crimes.

How gemaker is helping inventors take new tech to market

Natalie Chapman is on a mission to make sure brilliant research and inventions are shown to the world and released to the market, instead of languishing because of a lack of understanding of marketing.

Prices for Charleston homes are skyrocketing

Lowcountry man wins $300,000 and first thing he does is mow the lawn

While most people would rather do anything else but mow the lawn, one South Carolina man use the chore to think about all the things he's going to do with the $300,000 he'd just won.