While there were several attempts on the life of Queen Victoria, only one plot actually caused her injury. The second-longest ruling monarch (after the current Queen Elizabeth II) managed to survive an impressive eight assassination attempts.

According to historian Paul Murphy, Victoria's seven would-be assassins were: "Shooting stars; they came from nowhere, burst into the light of public attention for a short time following their attempts and disappeared back into obscurity."

They all lived for several years after trying to kill the Queen, who never believed in the "insanity" plea and said most of the men who attacked her knew what they were doing. That meant some of the gunmen were banished to Australia instead of being executed.

Queen Victoria and her beloved Prince Albert were traveling in an open carriage through Hyde Park on June 10, 1840. They had departed Buckingham Palace for their usual ride, and Albert later claimed he'd noticed "a little mean-looking man holding something toward us."

Suddenly, 18-year-old Edward Oxford fired his pistol at the Queen, just missing her. Luckily, Victoria had turned to look at a horse; apparently, she thought the shot was fired by a nearby hunter. By the time Oxford tried a second shot at the Queen, she'd managed to crouch down and escape the bullet. Oxford was found "guilty but insane" and was eventually deported to Australia after spending more than 20 years locked away in an asylum.

In the aftermath, the Queen represented popular opinion when she remained convinced that Oxford and those who came after him were "perfectly cognisant of their actions."

The next assassination attempt happened on May 29, 1842 as the Queen was riding in the open carriage with Prince Albert after a church service.

A "little, swarthy, ill-looking rascal" aimed his flintlock pistol in the direction of the couple, but the weapon malfunctioned and failed to fire. The man then ran away, disappearing into Green Park. He was later identified as being John Francis.

The next day, while royal security forces were on the hunt for the gunman, Queen Victoria made it clear she refused to stay holed up in the palace. She thought the best way to catch the would-be assassin was to be out and about as soon as possible.

So Victoria and Albert returned to their carriage and did the rounds of London. It proved to be a wise decision as a shot was fired near the royal carriage and police tackled the gunman. It was John Francis trying to finish off his work from previous day. He was sentenced to be hanged but the Queen decided to commute his sentence to "banishment for life."

Five weeks later, on July 3, 1842, another gunman tried to kill the Queen; 17-year-old John William Bean waited for the Queen to leave the palace for the short journey to the royal chapel.

He managed to push his way to the front of the crowd that had gathered to catch a glimpse of Victoria, and pulled out his pistol. However, the gun failed to fire. Somebody grabbed the teenager but he still managed to get away.

He was later caught and sentenced to 18 months of hard labor – his sentence was short because it was discovered his pistol contained more tobacco than gunpowder, so he wouldn't have killed the Queen if his pistol had actually fired.

On June 19, 1849, just before the Queen's birthday, Victoria was riding in her carriage with three of her children when 24-year-old William Hamilton fired a pistol at her. It was just as the royal carriage was returning to Buckingham Palace and took the Queen by surprise.

This time, the gunman was apprehended by the head keeper of Green Park. Hamilton, who was from Ireland and struggling due to unemployment, claimed to police that his gun was only loaded with powder "for the purpose of getting into prison, as he was tired of being out of work." He was sent to the dreadful prison colony of Gibraltar for seven years.

The next assassination attempt was by a former British Army officer, Robert Pate, who apparently had mental health issues and was known around London for his "manic behavior." On June 27, 1850 Pate approached the Queen's carriage as it stopped outside the palace. 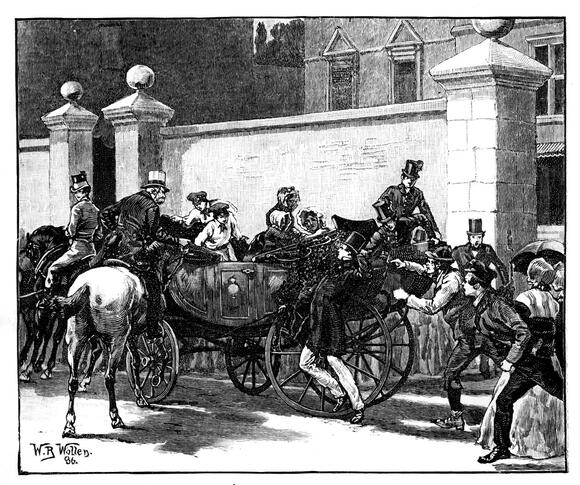 Then he went up to Victoria and whacked her on the head with a cane. Members of the public held him down as the Queen reassured her subjects "I am not hurt." However, she did sustain bruising to her head as well as a black eye. For his crime, Pate was sent to the penal colony of Tasmania for seven years.

While the Queen was enjoying an open carriage ride on February 29, 1872 around Hyde and Regent's Park, 17-year-old Arthur O'Connor managed to climb the fence of Buckingham Palace without being seen.

He ran across the courtyard and, by the time the Queen's carriage had returned, he was able to easily approach her and raise his pistol. Victoria's personal servant, John Brown, grabbed the teenager and wrestled him to the ground while the Queen was taken to safety, unaware of what was going on.

Later, O'Connor maintained he didn't want to kill the Queen; instead, he wanted to frighten her into signing a document to release Irish political prisoners from British prisons. He was sentenced a year in prison and 20 strokes with a birch rod before being banished to Australia. Brown was given a medal to honor his bravery.

The trial of Roderick Maclean in Reading, England, for shooting at the Queen, 1882. (Getty)

Once again, the Queen was riding in her carriage when she experienced her final assassination attempt. It was March 2, 1882 and a group of schoolboys from Eton College were cheering as they watched her pass by. Victoria later wrote: "At the same time, there was the sound of what I thought was an explosion from the engine, but in another moment, I saw people rushing about and a man being violently hustled, rushing down the street."

The disturbance was caused by 28-year-old Roderick Maclean who'd fired a shot at the Queen, forcing the school boys to whack him with their umbrellas before police took over. MacLean was found not guilty due to mental health reasons and was forced to spend the rest of his life locked in an asylum.

EnGeneIC has secured a deal with one of the world’s richest doctors for its Covid vaccine and a revolutionary cancer treatment. Two decades of hard work has resulted in EnGeneIC's ground breaking technology that has the potential to transform how life threatening illnesses are treated.

Wall St Rank helps investors by giving them access to Wall Street's investment informationWall St Rank/ Supplied. When the founder of Wall St Rank Amrit Rupasinghe noticed a distinct rise in the number of people turning to Tik Tok and YouTube during the pandemic, looking for “expert advice” about investing, he realised he had an opportunity for a much-needed new business.

Stormseal weather proofs buildingsSupplied/Stormseal. Residents recovering from the aftermath of Hurricane Ida are thankful for an innovative U.S. Army program - with support from friends ‘down under.’

We'd all like our work to be simple, consistent and rewardingMimi Thian/Unsplash. Whether you’re managing a team of workers, you're working on your own or simply a customer, there are a variety of roadblocks that make for a less than ideal experience when it comes to flow.

Bionic Vision Technologies has created a "bionic eye."Daniil Kuželev. An Australian tech company is changing the lives of blind people with a bionic eye, restoring functional vision, in a similar way to how the cochlear implant restores hearing.

John Killick was in Sydney's Silverwater Prison. Lucy couldn’t live without him so she hatched a daring plan to break him out that remains one of the most spectacular prison breaks in the world.

The man who filmed his own death at Chernobyl

There were many who risked their lives after the Chernobyl disaster — but none more so than a man desperate to show the world what happened. An aerial view of Reactor 4 after the explosion.Source:News Limited.

The Claw of Chernobyl: most dangerous thing in the exclusion zone

Forgotten in time, this creepy relic known as ‘The Claw’ is so dangerous only a handful of people know where it is. The Claw was used to dismantle the Chernobyl nuclear power plant and other radioactive areas. It is still so irradiated that, 30 years on, touching it could prove lethal. Picture: R Maxwell. Source:Supplied.

Why royal in-breeding was once considered "perfectly normal"

Europe has been controlled by royal families for hundreds of years, setting up strategic marriages to boost the number of their allies. But sometimes these unions resulted in inbreeding, which meant family illnesses were easily passed down the bloodline, as well as any deformities.

Mad King George III: was he really insane or was he suffering from an undiagnosed disease?

For centuries the rumor of the “mad King” has haunted the history books and finally the answer surrounding his sanity has been revealed. "King George III in coronation robes" painting by Allan Ramsay.Source:supplied.

Buffalo-born musician with South Carolina roots Edalo will be the headline act at The Tin Roof in Charleston, October 5. With live music on the rise again, Edalo’s excited to do his part by playing a live-set show at The Tin Roof; he's announced an East Coast Tour for Fall and will headline in 10 cities across America’s East Coast.

A preliminary report is giving the public a closer look at racial disparities in the North Charleston Police Department’s practices. CNA, the third-party organization hired to conduct the Racial Bias Audit of the North Charleston Police Department (NCPD), released preliminary findings of the investigation Monday, giving the public a chance to provide input.

Some police officers are feeling unappreciated by their communities@Live 5 News. Around a third of all law enforcement officers are leaving their jobs due to low morale, at a time when the State Law Enforcement Division reports an increase in violent crimes.

How gemaker is helping inventors take new tech to market

Natalie Chapman is on a mission to make sure brilliant research and inventions are shown to the world and released to the market, instead of languishing because of a lack of understanding of marketing.

Prices for Charleston homes are skyrocketing

Lowcountry man wins $300,000 and first thing he does is mow the lawn

While most people would rather do anything else but mow the lawn, one South Carolina man use the chore to think about all the things he's going to do with the $300,000 he'd just won.