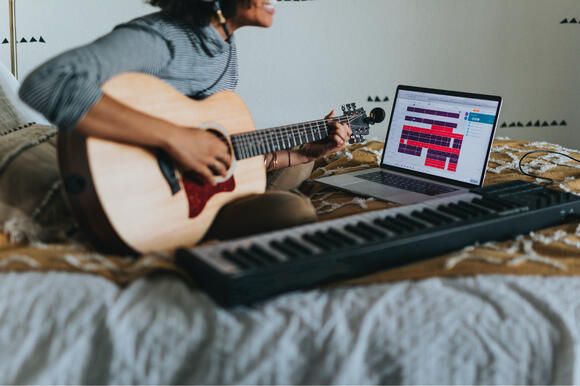 NASHVILLE, TN – Words & Music at Home is a free online program from Country Music Hall of Fame and Museum that invites people of all ages to hone their skills at songwriting as a method of self-expression. It's a place where you can learn about songwriting at any time and from anywhere.

The program offers information and inspiration for writers of all levels, from those who are just taking up a pen for the first time to those who are looking for a new perspective on their craft. Through the Words & Music at Home songwriter discussions series, you can get step-by-step instructions on how to start writing songs and learn about the creative process from pros.

This season offers a new slate of in-depth interviews with songwriters who reveal their creative process as well as the stories behind some of their most popular songs. In addition to his own career as a recording artist and songwriter, Charlie Worsham has collaborated with Eric Church, Luke Combs, Vince Gill, Marty Stuart, Carrie Underwood, Keith Urban, and many more.

Charlie Worsham had already won a junior national banjo championship and performed on the Grand Ole Opry stage by the age of twelve. By high school, though, the Mississippian had discovered that he wanted to be more than a backup singer, and he began to concentrate on honing his vocal abilities and learning to create songs. He's now one of Nashville's most well-known performers, a genuine triple threat who can sing, compose songs, and play many instruments.

Worsham is a dedicated songwriter who has kept a daily notebook for a long time and often draws song ideas from his observations and reflections. For many years, he believed that lyrics with less particular language were more general, until he realized that it was the other way around. He understands the importance of detail, which is why he writes a page every day. He claims that the new joy in his personal life has inspired his songwriting with his most recent tunes. He and his wife, Kristen, married in 2018 and had their first child in 2021.

The events can be enjoyed every Thursday in August on Country Music Hall of Fame and Museum YouTube channel from 7 p.m. to 8 p.m.