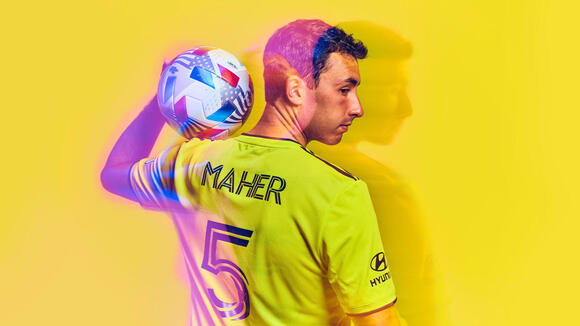 Maher has since returned to Nashville SC and joined the game against Toronto FC yesterday, where he scored a goal.

Maher played the full 90 minutes in the five matches for San Diego since joining on May 28. In Maher's five starts, the Loyal owned a 3W-0L-2D record, as the center back registered an assist, 321 pass completions, and 85.8 percent passing accuracy.

Nashville SC initially selected Maher with the first-ever pick in club history and second overall in the 2020 Major League Soccer SuperDraft out from Indiana Hoosiers Mens' soccer team. He was drafted behind first overall pick Robbie Robinson of the Inter Miami and clubmate Dylan Realis and Vancouver's Ryan Raposo.

Maher himself was a St. Louis Football Club product, playing for the U23 team and the United Soccer League (USL) team from 2016 to 2018 before committing to Indiana Hoosiers. The 21-year-old center back has appeared in three matches for the Boys in Gold following his professional debut on Oct. 11, 2020.

Maher himself then scored his inaugural MLS goal as Nashville beat Toronto FC 3-2. Playing alongside veteran defenders like Walker Zimmermann and Daniel Lovitz, the 6'1 defender deftly tapped in a corner kick from former German Youth Hany Mukhtar to tie the game.

Nashville themselves then scored two more goals to win the game, courtesy of forward Luke Haakenson, who scored his first two MLS goals in this match.