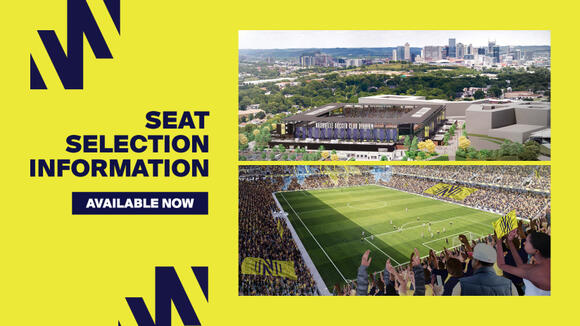 Beginning July 6, each member will have the option to secure a seat in the largest soccer stadium in the United States for the foreseeable future.

Priority in the selection process will be determined by the date of each season ticket membership's initial purchase. First String Founding MLS Members receive the highest priority, followed by Gold Priority, Blue Priority and any remaining priority members.

The Backline Supporters will earn the right to reserve a spot in their exclusive Supporters Section.

Since June 14, each season ticket holder has received a detailed guideline with information and instructions on the seat selection procedure and timeframe for July 6. On Monday, June 28, each member will receive an email with their individual seat selection windows.

Members can make their selection in one of two simple ways:

Before July 6, Nashville SC fans interested in getting a closer look at the new Nashville SC Stadium can visit the club's groundbreaking Virtual Venue. The architecturally realistic 3D map features full virtual reality views that enable fans to take an interactive tour of their new house via seat technology.

Starting at $18 per match for First String Founding MLS Members in the Backline Supporters Section and $12 for children 12 and under in the Family Section, the new Nashville SC Stadium offers a wide variety of options and pricing to ensure that everyone has the opportunity to be a part of history when gates open in 2022.