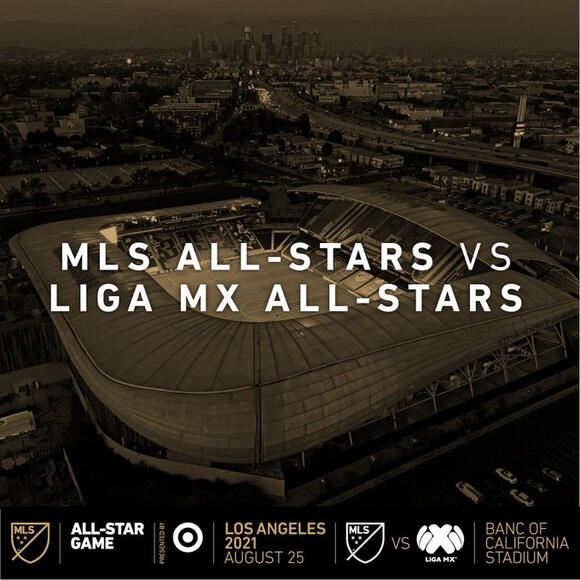 NASHVILLE, TN — After a year of suspense, Major League Soccer confirmed on June 9 that the 2021 MLS All-Star Game, presented by Target, will take place on Wednesday, August 25, at Los Angeles' Banc of California Stadium.

For the first time ever, two rival leagues will go head-to-head in an extraordinary showdown that will be summer's showcase event, as the whole soccer community joins to honor North America's sport and soccer culture.

The match will be broadcast in the U.S. on FS1 and Univision, in Canada on TSN and TVA Sports, on ESPN across Mexico and Latin America and in more than 190 countries and territories worldwide.

With the city of Los Angeles as the perfect backdrop, MLS All-Star week will come to life with both Leagues leaving a lasting legacy through opportunities for fan engagement and charitable initiatives that promote more inclusive and equitable communities. This will include access to various events such as MLS WORKS Community Day, MLS WORKS Day of Service, MLS All-Star Skills Challenge and MLS All-Star Concert.

Target's 2021 MLS All-Star Game is the newest piece of relationship between MLS and LIGA MX, which also includes important soccer events, such as Leagues Cup and Campeones Cup.

"This is going to be an intense match in a fantastic setting and world-class stadium in Los Angeles, a city that has a deep connection to our country, league, players and fans. The 2021 All-Star Game is another step in the partnership we have established between two of the best leagues in the world, and it will only intensify the rivalry between MLS and LIGA MX and is an important part of the internationalization project of our League to reach more audiences beyond Mexico. We are looking forward to playing for the supporters of LIGA MX and giving soccer fans around the world a match they will never forget," Executive President Mikel Arriola said.

“This will be a special night of football in Los Angeles,” Bradley added. “It is always an honor to represent our city and our league on the international stage, and we look forward to competing against the LIGA MX All-Stars.”

MLS All-Star Game tickets go on sale on Thursday, July 14, and further information about MLS All-Star event itinerary will be published in the following weeks.