Leah Frazier is a two-time Emmy award-winning content creator and journalist that has covered local news, entertainment, business, fashion and lifestyle on both the local and national levels for over 10 years. She's the CEO of Think Three Media -- an ADDY award-winning marketing and communications agency that provides creative and innovative solutions for cutting edge brands. Her podcast, PR Yourself with Leah Frazier is a top 100 podcast in the business category and adored all over the world. In addition to being a multi-hyphenate creative, she's passionate about entrepreneurship, startups, women's rights, fashion and more!

Dallas mom Erica Mollett, as the CEO of Banneky.com (an education tech platform for middle and high school students), desires many things for her two African-American teen sons, however, equity ranks high on her list. Specifically, the tech founder seeks to create diversity in industries where her sons often play and are frequently entertained: Esports and Gaming. As the pandemic increased their engagement within these close-knit communities, so did the opportunity for discussions and strategic partnerships -- encouraging diversity, equity and inclusion within STEM-related fields, so that everyone could feel as if they belonged.

"As a Dallas suburb mom of two African-American teen boys, the Esports and entertainment industries have been heroes for their emotional well-being," Mollett discussed. "The pandemic separated them from friends and classmates, and national racial tensions forced them to question their place in the world. Gaming not only offered community, but it also inspired diverse youth to innovate in areas like building gaming computers at home and becoming content creators on Youtube, Twitch and TikTok." 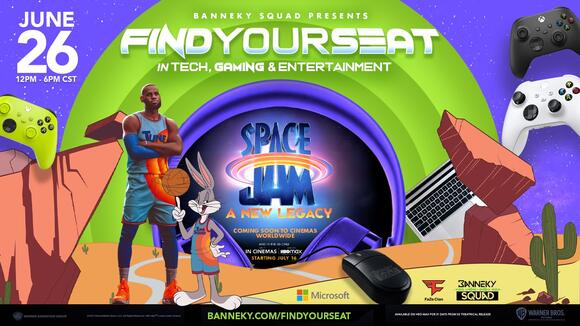 Banneky.com will present "Find Your Seat: In Tech, Esports & Entertainment" in partnership with Microsoft and Warner Bros. June 26Banneky.com

As the Founder of Banneky.com, Mollett went straight to work to further these initiatives -- partnering with both Microsoft and Warner Bros. for a one-of-a-kind, six-hour, online event for students on June 26th entitled "FIND YOUR SEAT: In Tech, Esports & Entertainment". The live-streamed event will be the ultimate high-energy experience with influencer-led panels, live coding and opportunities to get involved, also emphasizing on family fun themes and the new A.I. innovation utilized by the upcoming film: Space Jam: A New Legacy, in theaters and on HBO Max July 16.

"Our team is excited to partner with entertainment execs, tech innovators, and Esports influencers to inspire the next generation of diverse talent to find their seat in tech, Esports and entertainment," Mollett said.

Even more exciting are the guest appearances of gaming superstars Aerial Powers, FaZe Blaze, FaZe Swagg, and Sceptic at the upcoming FIND YOUR SEAT event. Microsoft developers, Esposure reps, game producers and content creators will head up the rest of the dream team, channeling this event as one where students can interact with gaming professionals, learn career and industry insights, plus code in real time.

While her sons and many others light the fire for Banneky.com, the FIND YOUR SEAT experience is just the beginning of many initiatives that Mollett and her team plan to present to underrepresented audiences. As time progresses, Banneky.com will seek to diversify the talent pipelines in STEM careers by fueling kid-produced content, and by also inspiring students to follow their creative passions in these tech-focused pathways.

If it takes a little Space Jam, gaming, FaZe Clan and entertainment to do it, then the Banneky Squad (and Mollett) will do it -- by any means necessary.

Leah Frazier is a two-time Emmy award-winning content creator and journalist that has covered local news, entertainment, business, fashion and lifestyle on both the local and national levels for over 10 years. She's the CEO of Think Three Media -- an ADDY award-winning marketing and communications agency that provides creative and innovative solutions for cutting edge brands. Her podcast, PR Yourself with Leah Frazier is a top 100 podcast in the business category and adored all over the world. In addition to being a multi-hyphenate creative, she's passionate about entrepreneurship, startups, women's rights, fashion and more!

Veteran communications expert Leigh Higginbotham Butler was 40 years old and a new mother to her third son, when all seemed well. She and her husband Chris were thriving in their careers, generating over six figures for the household, and in the midst of starting a small business. However, in just 10 years, life came crashing down.

'You Can Still Be Masculine and Express Yourself': The Men's Brunch Dialogues on Issues Affecting Black Men Today

On September 18, 2021, the One Unified Resource Foundation, Inc. (OUR Foundation), presented its annual Men's Brunch at Lofty Spaces (806 Montgomery St., Dallas, TX), from 12PM to 3PM. The theme for the occasion was "Men About Culture", with the tagline "Return of the M.A.C." The mission of the brunch was to encourage, empower and pamper men who continuously strive to be exceptional leaders in the community.

It’s a common occurrence that sports are comparable to life. As Vince Lombardi once stated, “Football is like life: It requires perseverance, self denial, hard work, sacrifice, dedication and respect for authority.” For former football stars Lubbock Smith III, Tyler Patmon and Jeremiah Hatch, the dance between football and life is one that they believe every athlete should master, undoubtedly in the same ways that Lombardi instilled this philosophy in each and every one of his players. From the root of this very foundation, Camp Exposure was born.

Comedian Kevin Hart is set to launch his own Talk Show "Hart to Heart", exclusively on the Peacock network as an original series on August 5th. Unplanned, unscripted and unfiltered, Hart will interview A-list guests as they sit back, sip on vintage wine, and engage in a captivating discussion.

"If you guys realized what truly happened to Eric, and what came out in that courtroom, this world would be livid," author Sherilyn Reed said as she recounted the words told to her by Gwen Carr, the mother of Eric Garner.

“The only difference between a wealthy woman and a poor woman -- is [that] the wealthy woman believed she deserved it.”. These are the words of Kine Corder, the CEO of Presidential Lifestyle, and one of the many multi-millionaire women featured in the new online docuseries, "Millionaire Within Her". The 9-part docuseries, hosted by celebrity entrepreneur Kristi Frank (NBC's Season #1 of "The Apprentice"), was launched on Women's Wealth Day (June 8th) at 9 p.m. EST, to feature the world's leading women in a candid discussion involving worth and wealth, to empower other women on their trajectory to millions.