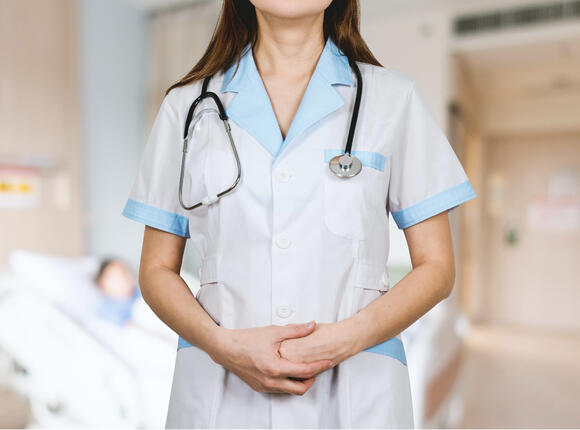 The portrait was part of the magazine’s June 6 cover story written by artist Tim Okamura, who painted nurses on the front lines during the pandemic.

Dennis admitted she still recalled the conversation between her and Okamura, which led to creating the portrait, saying, “I was asking him how he’s doing, and we were speaking on the psychological tolls that have impacted everyone with COVID that many people don’t talk about.”

After sending Okamura some pictures to get started, she then had to sit for four hours at his studio in New York.

Dennis is depicted from the chest up in the portrait, wearing navy blue hospital scrubs, her hospital name tag, and blue gloves. A standard medical face mask is looped over one ear, with her hands positioned on the mask as if she is in the process of putting it on or taking it off. Her dark hair is in a messy bun, held out of her face by a black headband.

After graduating with a Bachelor of Science in Nursing in 2018, Dennis decided to become an itinerant nurse after seeing the impact of the pandemic in the Northeast.

“They were really severely hit, so I wanted to be up there, I wanted the experience, and I wanted to help. There were a lot of situations of them not having enough critical care nurses to help out with the pandemic,” she said.

Working in the intensive care unit, Dennis only saw COVID-19 patients. She said seeing almost none of her patients make it out of ICU was hard for her. Communicating status updates, most of which were not good, to family members using FaceTime took a psychological toll. Similarly, knowing that being unable to have visitors could negatively impact a patient’s recovery.

“Every patient was different for the same illness … you have five different patients, and none of them have the same problem. It was tough. It hit really hard,” she continued.

Dennis’s longest assignment was at Phoebe Putney in Albany, the epicenter of a major COVID-19 outbreak in Southwest Georgia, where she posed for the portrait. She became part of a group of travelers hired to manage an entire campus dedicated to COVID-19 patients.