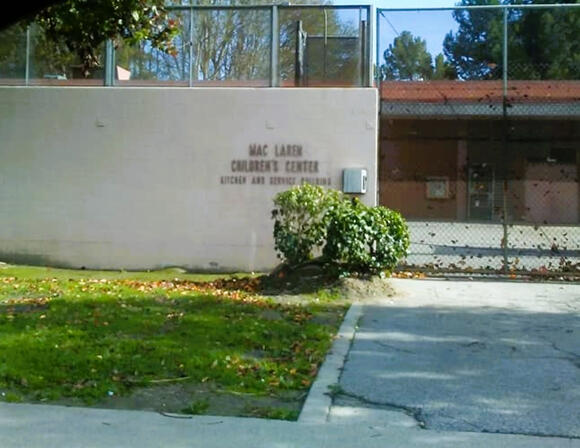 Ben Crump of Ben Crump Law and co-counsel Adam P. Slater of Slater Slater Schulman LLPI stood alongside survivors to announce a lawsuit against LA County for failing to protect minors at MacLaren Hall, where kids were often overmedicated, restrained, & assaulted, according to Crump.

"Many children at MacLaren Hall were removed from abusive homes only to be subjected to sexual abuse, threats, and retaliation if they reported the facility! The decades-long misconduct at this county-operated facility cannot be ignored", Crump said.

"MacLaren Hall was run like a child prison, with sky-high walls, barbed wire fences, floodlights, and massive gates and doors guarded by probation officers," It was a literal house of horrors for the children who were brought there, often taken from an abusive home only to be re-abused at MacLaren. The County of Los Angeles had one responsibility – to protect and care for vulnerable children, but these children were sexually abused by the very people who were supposed to protect them and ignored by other adults when they reported the abuse. - Adam P. Slater, Founding Partner of Slater Slater Schulman LLP

In the beginning MacLaren Hall was intended to house children removed from their homes and waiting to be placed in foster care. At some point however, it became the place where other juveniles were held forcing children who were removed from their homes due to varying types of abuse, to be housed with the mentally ill, emotionally disturbed and children facing criminal charges.

Maclaren Hall was eventually closed; however, it wasn’t shuttered because of reports of abuse. It was closed when the American Civil Liberties Union sued Los Angeles County for failing to provide sufficient medical care for the children.

This story includes discussion of sexual abuse. If you or someone you know needs help, please call the National Sexual Assault Hotline at 1-800-656-4673.)

After an unprecedented search of former President Trump’s Mar-a-Lago residence, some are calling for a dismantling or defunding of the FBI and DOJ. Red and White the North Face Fitted Cap-:Pexels.com::_

Young man with LGBT flag painted across face-:Pexels.com::_. Monkeypox is transmitted to humans through close contact with an infected person or animal, or with material contaminated with the virus. Most cases in the growing monkeypox outbreak are among men who have sex with men, according to the World Health Organization.

A video starting to make the rounds on social media and #blacktwitter depicts an inmate complaining about medical mistreatment in prison. The video was posted to the Instagram account of the law firm Maxwell & Tillman with the caption “Alabama prison refusing to give inmate a new colostomy bag. This is heartbreaking but completely normal in our prison system”, the post said.

Who should be responsible for kids social media habits? A lawsuit filed by families of children who participated in a challenge blame TikTok for their deaths. Disclaimer This article does not promote or glorify suicide or self-harm and encourages parents to speak to their children about the life–threatening dangers associated with the game and to seek additional help if necessary.

Las Vegas: Nightmarish scene as reports of an 'Active Shooter' on the strip.

At about 10:00pm on July 16, 2022, reports started to surface of an active shooter on the Las Vegas Strip. Turned out to be a false alarm. Many social media users posted video of the panic and chaos that ensued as individuals were fleeing the area, running around and seeking safety and shelter. Some users tweeted that they were locked in elevators or sheltered in restaurants behind locked doors.

Opinion: Fatal shooting of Jayland Walker and the George Floyd effect on policing.

With a history of policing Black Americans that evolved from the Slave Patrols in the 1700’s, it is understandable why to this day the community has an inherent distrust of law enforcement. Afterall it was just 2 years ago, when we all witnessed Derek Chauvin put a knee on the neck of George Floyd for 8 minutes 46 seconds, asphyxiating him to death.

A video posted to Twitter shows the moment a woman came precariously close to the Presidential motorcade and what happened next. President Joe Biden was in Los Angeles Wednesday to lead the Summit of the Americas.

Jamaar Williams, an activist with Black Lives Matter Metro Phoenix, said "there is no question" the incident involved police violence from the Tempe officers. -Yahoo News. On May 28, 2022, Tempe police officers responded to a reported altercation between a homeless man and woman near the Elmore pedestrian bridge.