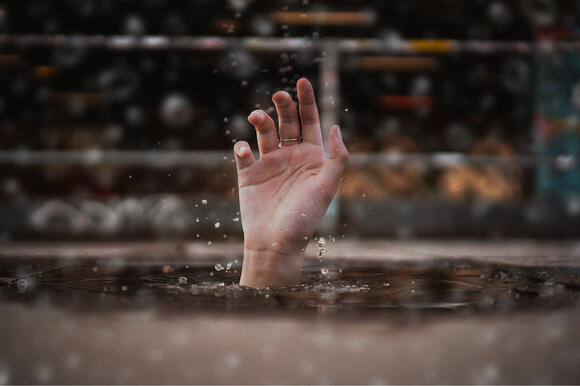 Jamaar Williams, an activist with Black Lives Matter Metro Phoenix, said "there is no question" the incident involved police violence from the Tempe officers. -Yahoo News

On May 28, 2022, Tempe police officers responded to a reported altercation between a homeless man and woman near the Elmore pedestrian bridge.

While calmly talking with police Sean Bickings decided to climb over a fence and announced he was going for a swim. He began to struggle after 30-40 yards and eventually drowned.

None of the officers on scene jumped in to try to save him and that has sparked conversation of whether the police inaction was a dereliction of their duties to protect and serve.

@vishnu_real replied on twitter- Seriously, what are we paying police for? When there is a crisis, most of them choose to stand on the sidelines and power trip against angry parents or spouses while people are dying. When will police be held accountable? -Twitter

@rsan934 on twitter replied -Imagine the two NYPD Officers during 9/11 saying I'm not going into those buildings to help anybody. Both of their efforts saved hundreds leading them down from the towers, before both were killed in the collapse. US policing has taken a turn for the worse!- Twitter

40 yards out and back with a current is a hard swim by yourself..no way a person that doesn't swim everyday could do that and pull someone back with you... no way an every day police officer could do it..you'd have 2 dead people. We just had a local father die trying to rescue his son who floated away in a tube. Son was rescued because he had the tube. Father died... You-tube user

"The whole reason Madrocks (Bickings) was scared is because of the threat, it was police violence," Williams said. "Police don't actually have to be exercising that violence to cause that reaction which is fear, panic, and self-survival."- Jamaar Williams

Opinion: At no point in the incident did the officers give any reason for Bicking's to be scared. They were cordial and fairly professional. Bicking's appears to know and states he is not being detained and calmly climbs over a fence and announces his swim.

I disagree with the narrative suggested by BLM and it's one that doesn't work in every police interaction, including this one. How BLM can blame violence even though there was none- is beyond me, and further diminishes the organization's credibility.

How does BLM read the mind of a deceased individual to say what he was thinking and why he acted the way he did?

Maybe it's just me but I don't see why a cop should be expected to jump in a lake to save someone. Who is to say the cop could even swim? The officer even said to him he should not be swimming in the lake. Mr. Bicking's of his own free will then went swimming.

Once again police are placed in a lose/lose situation. I keep seeing comments about police "took and oath", but when you actually read the oath it doesn't include being a lifeguard.

According to the Tempe Officers Association, officers are not trained for water rescues. These officers followed their training and went to get a boat.

The city has said it will be looking into providing life saving equipment near the water in the future to help get resources to someone quicker in the event something like this happens again.

I hate that someone lost their life but we have got to take responsibility for own actions at times also and not expect anyone in society to save us from our bad choices.

This has solely been my JADED opinion. You are welcome to leave yours in the comments below.

Young man with LGBT flag painted across face-:Pexels.com::_. Monkeypox is transmitted to humans through close contact with an infected person or animal, or with material contaminated with the virus. Most cases in the growing monkeypox outbreak are among men who have sex with men, according to the World Health Organization.

A video starting to make the rounds on social media and #blacktwitter depicts an inmate complaining about medical mistreatment in prison. The video was posted to the Instagram account of the law firm Maxwell & Tillman with the caption “Alabama prison refusing to give inmate a new colostomy bag. This is heartbreaking but completely normal in our prison system”, the post said.

Who should be responsible for kids social media habits? A lawsuit filed by families of children who participated in a challenge blame TikTok for their deaths. Disclaimer This article does not promote or glorify suicide or self-harm and encourages parents to speak to their children about the life–threatening dangers associated with the game and to seek additional help if necessary.

Las Vegas: Nightmarish scene as reports of an 'Active Shooter' on the strip.

At about 10:00pm on July 16, 2022, reports started to surface of an active shooter on the Las Vegas Strip. Turned out to be a false alarm. Many social media users posted video of the panic and chaos that ensued as individuals were fleeing the area, running around and seeking safety and shelter. Some users tweeted that they were locked in elevators or sheltered in restaurants behind locked doors.

Opinion: Fatal shooting of Jayland Walker and the George Floyd effect on policing.

With a history of policing Black Americans that evolved from the Slave Patrols in the 1700’s, it is understandable why to this day the community has an inherent distrust of law enforcement. Afterall it was just 2 years ago, when we all witnessed Derek Chauvin put a knee on the neck of George Floyd for 8 minutes 46 seconds, asphyxiating him to death.

The legendary music and media mogul posted to his Instagram account on Sunday May 29, 2022- Our family is dealing with an overwhelming grief for the loss of my daughter Tytyana. We respectfully request some privacy so that our family can grieve. We appreciate all of the prayers love and support. Mental illness & substance abuse is a real issue that we can’t be afraid to talk about. With God, we will get through this. #MyAngel- Master P.

Palms Place is located within minutes from the Las Vegas Strip next to the two iconic towers of the Palms Casino Resort. The (condominium) hotel consists of studio and 1-bedroom suites. The studio suite for this review is 615 square feet and features a full kitchen, 9-foot ceilings, a whirlpool bathtub, and hardwood flooring.