Dickey's Barbeque in Lake Elsinore was the pits! Cold food & too much smoke.

Dickey’s is one of the largest franchise barbeque restaurants in the U.S with over 500 locations in 44 states.

I visited Dickey's Barbecue Pit at about 3:00 in the afternoon. I walked into an empty restaurant which I thought was peculiar, however, there were three friendly staff members behind the counter eager and helpful in explaining the menu as this was my first time in a Dickey’s.

The eatery is set-up to whereas you walk up, order, pay, and then seat yourself. The food is brought to you when it’s ready.

3 things I’m going to preface this section with, number one (1) I get it that restaurants can have a bad day and there is variability with different chef’s and cooks.

Number two (2), I will say for my readers to understand, I expect a good meal 24/7/365 and there are no excuses –these are my expectations going in.

And lastly, these opinions are based off of one meal/encounter and may not reflect the overall service condition of the restaurant.

Having said all that- this was some of the worse food I’ve eaten in the last 6 months on the tour! Where do I start?

Our RIBS are slow smoked over real hickory wood for fall-off-the-bone experience that will satisfy your BBQ cravings.-Dickey's Barbeque Pit

I bit into a rib and I don’t know what shocked me first, whether it was the pure taste of smoke, or the toughness of the meat.

To say that meat had too much smoke would be an understatement- it was not edible unless you just love a bitter smoke flavor. The smoke taste overshadowed any barbeque meat flavor – all smoke. Horrid!

One of the employees mentioned to me that the meats are in the smoker 14 hours every day. That rib tasted like it had been in there 14 days!

I was gracefully trying to chew that tough piece and actually bit the inside of my cheek wrestling with it.

I then moved on to the chicken strips. They would have been okay, at least in comparison to the rib, except the chicken was cold (not in the least bit warm) and dry.

Next, the macaroni and cheese. You can somewhat tell from the picture; it was dry and sticking to the container it was in.

Very little flavor other than what seemed to be a mild cheese sauce perhaps poured over some sticky pasta and left out to dry. It was a congealed clump of substance.

The chicken wings you could order with varying degrees of hot sauces.

Dickey's Barbecue Pit's Chicken Wings are slow smoked and then deep fried for a level of deliciousness that will make your mouth water! - Dickeys Lake Elsinore FB Page

The problem here was they kind of forgot this part “deep fried to a level of deliciousness” because the texture seemed more like baked chicken when it arrived at the table drenched in sauce.

The wings certainly didn't look as appetizing as the photos: 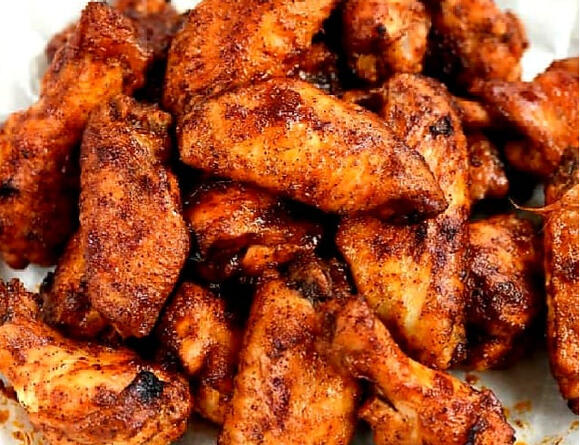 The only edible item was the stuffed potato. If not for that, I would have left as hungry as I was when I arrived.

None of the meats were served hot. The baked beans were okay I suppose but there wasn’t any extra to them, just basic.

The saving grace of this entire meal was the potato.

Let me know in the comments if you have tried this location and what your experience was like.

As 2021 comes to a close, I wanted to share some of the highlights of this years I.E Soul Food Tour. Since the informal tour began, I’ve shared 30 plus restaurant experiences, the good-bad and ugly. Today I will be zeroing in on what delighted my taste buds and left long lasting tasty memories.

Homeless in the real world while Metaverse virtual land selling for millions.

This may sound like a pure rant but really how ridiculous is it that while all types of suffering is going on in this world that there are entities purchasing and developing virtual real estate?

Hemet suspects in possession of a stolen vehicle, narcotics, and a firearm, arrested.

Reporting officer Sergeant Art Paez from Region 3 Gang Task Force announced the apprehension of two suspects in possession of a stolen vehicle, narcotics, and a firearm. According to the official release of information provided, on Wednesday, December 15, 2021, at 8:14 in the evening, Region 3 Gang Task Force Officers located an occupied stolen vehicle driving in 700 Block of North Sanderson Avenue, in the City of Hemet.

Where to eat breakfast in Menifee? Try the ‘Breakfast Club’. Good morning!

Another L.A Rapper gone too soon. R.I.P Slim 400. Our culture is killing us & it needs to stop!

On Wednesday December 8, 2021, we learned sadly that another up & coming rapper was shot and killed in Inglewood. Compton rapper, Vincent Cohran, stage name Slim 400, was gunned down in Inglewood, in an attack that was caught on surveillance video, as he sat in a parked car.

Tragically Nick Cannon announced today that his 5-month-old soon Zen has passed away. Nick and Zen’s mom Alyssa Scott are mourning his loss. According to the NIH, Hydrocephalus is an abnormal buildup of fluid in the ventricles (cavities) deep within the brain. This excess fluid causes the ventricles to widen, putting pressure on the brain’s tissues.

An update to the public from the Riverside County Sheriff’s department indicates that suspects have been identified, arrested, and booked into the county jail. On Friday, November 26, 2021, at 1:51 in the morning, deputies responded to a business in the 4000 block of N. Perris Boulevard in Perris for a report of an assault with a deadly weapon.