Los Angeles Lakers Center Andre Drummond Is Still Out Because Of His Toe Injury; Return Unknown

New Los Angeles Lakers center Andre Drummond made his debut last week against the Bucks and it was short lived after he injured his toe after playing 14 minutes. Originally, Drummond was only going to miss a game or two, but he’s already missed two games and his status moving forward is unknown. This is yet another injury the Lakers have to deal with on top of LeBron James and Anthony Davis. Chase Senior of Chat Sports breaks it down on today's Lakers Report. 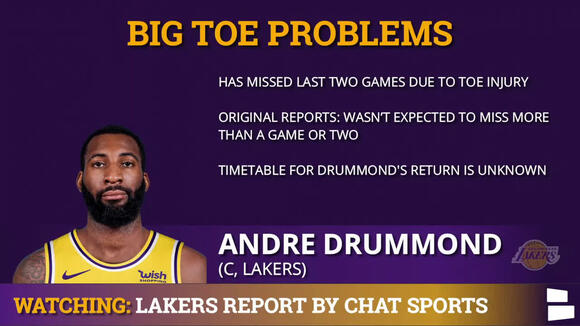 Lakers star LeBron James hasn’t played since March 20 because of a high right ankle sprain, but good news could be coming for him and the Lakers. According to reports, LeBron could return as early as this week, just in time for the Lakers to get a rhythm going before the playoffs begin on May 22. LeBron was in the heart of the NBA MVP conversation before getting hurt. The Lakers have gone 7-10 without him. Chase Senior of Chat Sports discusses James’ possible return on the Lakers Report.

Anthony Davis returned to action last night for the Lakers after missing 2 months due to a lower leg injury. AD played just 17 minutes in last night’s game vs. the Mavericks and struggled posting a stat line of 4 points, 4 rebounds on 2 of 10 shooting. It will take time for AD to get back in the swing of things but Lakers fans should just be happy he is back on the floor wearing the purple and gold. Follow the Lakers Report right here on News Break!

Anthony Davis Set To Return To The Lineup Tonight For The Lakers vs. The Dallas Mavericks

Lakers star Anthony Davis hasn’t played since mid February due to a calf strain and achilles injury but he told reporters on Wednesday that he plans on rejoining the Lakers lineup on Thursday night when the Lakers take on the Dallas Mavericks in Dallas. There is still no timetable for LeBron James’ return, but the return of A.D. will certainly give the Lakers a boost. Chat Sports host Chase Senior discusses what Davis’ return means on this episode of the Lakers Report.

WATCH: Lakers NBA Draft News: Three Prospects The Lakers Could Target In The First Round

NEW Video - The Los Angeles Lakers figure to pick somewhere in the latter part of the first round and they could use some cheap, affordable young talent. Chat Sports host Chase Senior takes a look at three guard prospects who could be on the board when the Lakers are on the clock during the 2021 NBA Draft including Jared Butler of Baylor, Tre Mann of Florida and David Duke of Providence.

The hope originally was for Lakers star Anthony Davis to return over the weekend against the Jazz or on Monday night vs. Utah. That won’t happen, but Davis could return when the Lakers embark on an upcoming four-game road trip. Davis has been out since mid-February because of a calf/achilles strain. The Lakers have fared well without Davis and LeBron James in the lineup, but could use both back to get ready for the playoffs. Chat Sports host Chase Senior breaks it down on the Lakers Report.

Michael Jordan and Kobe Bryant are considered two of the greatest NBA players of all-time and their games mirrored one another’s. Bryant emulated his idol throughout his life and now, after getting elected into the Naismith Basketball Hall of Fame in 2020, Jordan will be presenting Bryant at his Hall of Fame induction. Jordan also spoke at Bryant’s memorial in February 2020. Chat Sports hosts Harrison Graham and Chase Senior discuss on NBA Now.

After not being on the court since February 14th due to an achilles tendon/calf injury Lakers F/C Anthony Davis has finally been cleared for full on-court work this past week. Davis could return to action for the Lakers as soon this Saturday or Monday. Frank Vogel was asked about AD’s return and said, “He’s going to have to use some games to get back in shape. So the first few games he’s back will likely be short-minute performances, with probably like a 15-minute restriction..."

Los Angeles Lakers guard Dennis Schroder is going to be a free agent after this season and he is expected to have suitors. That includes the New York Knicks. The Knicks have a need for a point guard and could have around $50 million in cap space. Should the Lakers re-sign him? The Lakers signed Ben McLemore last week and already, he’s impressed his teammates and coaching staff. Chase Senior breaks it down on the Lakers Report by Chat Sports.

Los Angeles Lakers legend Kobe Bryant played his last game five years ago today. The Hall of Famer, who passed away in January of 2020, ended his basketball career in style, scoring 60 points in a memorable night at the Staples Center. We turn back the clocks and remember Kobe’s final game. Speaking of Bryant, did he try to recruit Dallas Mavericks great Dirk Nowitzki to the Lakers? Chat Sports host Chase Senior dives into all of this on the Lakers Report.

Lakers Mock Draft: ESPN Has LA Selecting G Jared Butler Out Of Baylor In Their Most Recent Mock

VIDEO - The Los Angeles Lakers are chasing a second straight championship, but it’s not too early to start looking ahead to the offseason. Now that the NCAA Tournament is officially over, ESPN NBA Draft analysts Jonathan Givony and Mike Schmitz collaborated for their updated NBA Mock Draft. They have the Lakers drafting Baylor guard Jared Butler in Round 1. Lakers Report hosts Harrison Graham and Chase Senior give their thoughts on the Butler selection and how he could fit in LA.

The Lakers have been without LeBron James for about 3 weeks after suffering his ankle sprain. And according to ESPN, it might be another 3 weeks before LeBron makes his return to the court. Getting him healthy gets the Lakers back to the title contenders they are at full strength. In today’s News Break poll of the Day, vote on who means more to Los Angeles: Type ‘AD’ for Anthony Davis or Type ‘LBJ’ for LeBron

Anthony Davis has been out since February as he deals with a nagging calf strain. However, his return is finally at hand, as ESPN reports Davis will be re-evaluated this week and could make his return in 10-to-14 days. The Lakers have missed Davis badly and his return would provide a huge boost as the Lakers look to help themselves in the playoff standings. Watch out for Davis to return during a road stretch that includes back-to-back games against the Dallas Mavericks.

The Los Angeles Lakers continue to play up-and-down basketball while LeBron James and Anthony Davis remain sidelined with injuries. Marc Stein reports that Davis could return after the Lakers’ current road trip. LeBron also posted on Instagram saying a “thunderstorm” is coming. Lakers Report hosts Harrison Graham and Chase Senior have the latest timelines on when James & Davis could return to the court for the Lakers. Let us know in the comments if you think LeBron or AD will return first.

VIDEO: When the Los Angeles Lakers signed Andre Drummond, that signaled that Marc Gasol was likely going to see a decreased role. He let those frustrations be known on Friday, saying he wasn’t happy with his role as a backup in the front court. Coach Frank Vogel offered his support and confidence, saying Gasol was a huge part of the team. What happens when Drummond comes back? Chase Senior discusses this on the Lakers Report by Chat Sports.

WATCH: The Los Angeles Lakers Have Signed Free Agent Wing Ben McLemore For The Rest Of The Season

Without LeBron James and Anthony Davis, the Los Angeles Lakers are in need of depth pieces and scoring help as they slip in the Western Conference standings. The Lakers signed Andre Drummond after he was bought out by the Cavs and now they’ve made another move, signing free agent Ben McLemore for the rest of the season. McLemore was released by the Houston Rockets earlier this week and figures to provide the Lakers with a depth piece, who can pose as a 3-pt shooting threat and lock down defender.

Los Angeles Lakers guard Dennis Schroder Turned Down A Big Contract; Is That Why LA Shopped Him?

According to reports, Los Angeles Lakers guard Dennis Schroder turned down a four-year contract extension that would’ve paid him around $80 million. Schroder is set to be a free agent after this season. Since he turned down that deal, he was involved in trade discussions that would have brought the Lakers back Kyle Lowry. Chase Senior dives into the latest on the Lakers Report by Chat Sports. Hit the FOLLOW button for more Lakers News & Rumors here on News Break!

The Los Angeles Lakers signed Andre Drummond through the NBA’s buyout market on Sunday night, filling a major need in the front court, especially without LeBron James and Anthony Davis for the foreseeable future. Drummond is considered to be one of the better center’s in the league and because of that, Drummond could demand a hefty salary on the open market when he becomes a free agent this summer. Will the Lakers re-sign him? Coach Frank Vogel says he would like to.

The Los Angeles Lakers are gearing up for a championship run this season, but could LeBron James be eying a big free agent prize for the future? ESPN NBA Insider Brian Windhorst is suggesting that LeBron is recruiting Stephen Curry to the Lakers. Curry is set to be a free agent after the 2021-22 NBA Season unless he signs a contract extension with the Golden State Warriors. Could Steph opt to join the Lakers in 2022? Lakers Report host Harrison Graham gives his thoughts on today’s video.

The Los Angeles Lakers made a splash when they signed center Andre Drummond in free agency once he bought out by the Cleveland Cavaliers and cleared waivers. Without LeBron James and Anthony Davis in the lineup, Drummond’s debut was highly anticipated. Unfortunately for Drummond and the Lakers, his first game with the Lakers was cut short due to a toe injury. Chase Senior breaks it down on the Lakers Report by Chat Sports.