When once instituted, for whatever reasons or by whatever process, dress became a source of physical reactions for its intimate connection with personality. In the ages before dress, people underwent the process of natural adaption by means of environmental influences. 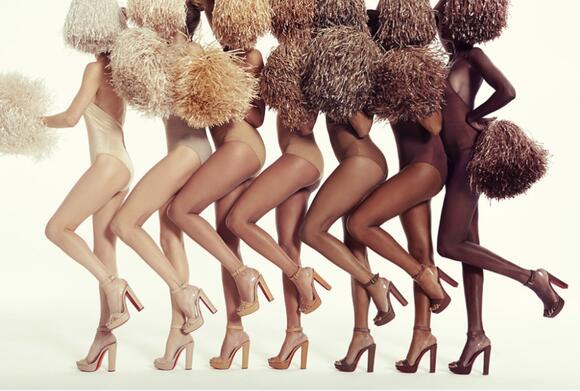 The most obvious of these natural adaptations is pigmentation. The skin of man is graded in color from the Equator to the Pole. For instance, the darker skin pigmentation guards against the actinic rays of the sun. The blondness of northern races, like the white color of Arctic animals, keeps the heat of the body. The British settlers in North America have taken the aboriginal type of the Indian face and head. Migrants from lowlands to uplands develop round-headedness. From the temperate regions to the tropics man develops frizzly hair, and so on.

Frequently, clothing can be compared to a house. For instance, the animal never exposes itself unnecessarily. If there are larger animals, it can get covering like a shelter. A similar argument applies to the ornamentation as a sexual stimulus. But for the humans, wearing clothes can help to be active in circumstances where animals seek shelter. For example, Chaco Indians wear costumes and paintings in perfect harmony with the surroundings. Thus, there is a real continuity between the adaptive color of the chameleon, and the harmony which human dress may show with its surroundings.

In Europe, dress was basically restricted to women for the past centuries. Before that, the attempts were taken to put down any tendency on the part of women, prostitutes being excepted. The previous stage is still that of Islam. And, the female dress should not be ornamental, but protective of the husband’s rights. Thus, women as a sex has not only gained freedom, and the right to fascinate, but has also shifted the equilibrium of sex to a more permanent and efficient position. So, the dress shows an important social movement.

Clothing stands in relation to the sexual life, where the male jealousy instituted dress for married women. The primary function of her dress is to make her unattractive to others, to conceal her body from other men's eyes. Often, married women alone are clothed. It is as if before marriage a woman was free and naked; after marriage, clothed and a slave.

"The first to wear complete clothes is not the man, who has to dash through the forest, but the married woman."

Excerpts from the book "With the Tin Gods" by Mrs. Horace Tremlett. At the turn of the twentieth century, the British Empire controlled a quarter of the earth's surface and nearly a quarter of its population. Even in the middle of the jungle, dressing for dinner was a cherished ritual for British officers. In Nigeria, they were accustomed to dining alone after a hot, long day at work. He would bathe, then wear a dinner jacket and tie to endure the tropical heat. Who was his audience? What was the purpose of this ritual?

Excerpts from the book "Below the Peacock Fan: First Ladies of the Raj" by Marian Fowler. Standing armies, economic exploitation, and divide-and-rule political strategies have been examples of imperial domination. Townships, ceremonial thoroughfares, and residential areas were named after British sovereigns to demonstrate power and rank between the rulers and the ruled. Nevertheless, Bernard Cohn, an expert on British colonialism in India, believed that a far greater power was found in spectacles, rituals, and mass ceremonies, which subtly incorporated the indigenous princes, emirs, and chiefs into a descending hierarchy.

"Conflict and Costume", Merrell PublishersJim Naughten. The Herero genocide was committed by the German Empire in German southwest Africa, now Namibia. It was the first genocide in the 20th century, occurring between 1904 and 1908. One of the largest and wealthiest indigenous groups, the Herero Tribe, was nearly annihilated. Over 70% of the Herero people were killed, women were raped, and children were hanged. Herero dresses, of Western origin, were copied from the&nbsp;German colonizers. Despite the unmistakable Victorian dress being considered fraudulent, it is a traditional ethnic dress for the Herero Tribe. As a living history of genocide, the Herero dress also represents defiance of who the Herero people are, what psychological trauma they overcame, how they restructured themselves, and how far they have come as a community. As a symbol of their identity, the Herero dress represents how the tribe has turned its pain into glory. The meaning of the dress, as a cultural practice, conveys the effect of colonial and postcolonial relations of authority and wrestle with foreign hegemonies.

Yves Saint Laurent and the "Trapeze" collection, at Christian Dior on January 30, 1958.Photograph by Sabine Weiss. Fashion is influenced by isolated fundamental forces. Sophisticated societies are defined by a culture of boredom due to excessive free time. As a result, the urge to escape the monotony of daily routine is reinforced by a desire to add to the attractiveness of the self and all other objects of love and friendship. Precisely powerful societies tend to convict their individuals’ egos of being helpless. As a result, the individual is unconsciously thrown back on himself and requires confirmation of his actuality. The endless rediscovery of the self becomes an obsession, and the identity can likely be destroyed. That is why insensitive individuals frequently go overboard and nullify the very purpose of fashion.

Black velvet sheath dress and pink satin bow, design created for the perfume Paris, 1983Photograph by Gilles Tapie. I have been debating what to write for a long time because elegance is so subjectively defined, so perhaps it is best to start with what elegance is not. It is not, of course, fashion, it is not even the same thing as style; style is a great quality to have, not least because it denotes a sense of originality, but it also implies self-advertisement and that rather tiresome quality that Americans call pizzazz. Elegance, on the other hand, is a more chaste, reserved self-effacing quality, and I may be mistaken, but I detect a hint of benevolence in it as well.