Follow for political, business, and economic issues impacting your community. 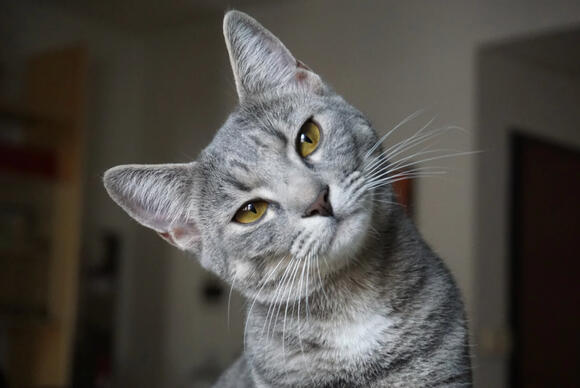 Today, the White House got a new furry addition to the presidential quarters -- Willow the cat.

The "First Cat" is a two-year-old gray and white tabby cat who now shares the Twitter account @TheOvalPawffice with the "First Dog," Commander, a lively German Shepard puppy.

According to a recent tweet on the "First Pets" Twitter page, First Lady Jill Biden named the cat "Willow" after Willow Grove, Pennsylvania where the cat was born.

Willow was a stray cat that previously lived on a farm in Willow Grove that President Biden stopped at during his Presidential election campaign in 2019. Willow Grove also happens to be Dr. Jill Biden's hometown.

The Bidens aren't the first presidential family to have cats in the White House.

George W. Bush had a black American Shorthair named "India." The Clintons adopted a cat named "Socks" while Bill was in the White House. The Regans had two cats, Cleo and Sara.

Jimmy Carter, Gerald Ford, John F. Kennedy, Calvin Coolidge, and Woodrow Wilson are all recent presidents who kept cats in the White House during their administration.

Hopefully, Willow will prove to be well behaved enough to keep her spot in the White House, unlike her predecessor, Major. Following the death of the Biden family dog Champ, they adopted Major, a rambunctious German Shepard, from a local shelter.

However, Major had some behavioral issues that were not becoming of a "First Dog." After several biting incidents, the Bidens decided to rehome him. We are all hoping that Willow adjusts to her new home in the White House.

Follow for political, business, and economic issues impacting your community.

An independent creative branding agency has come up with a unique and clever way to spread awareness about discrimination, racism, and hate crimes experienced by members of the AAPI community.

Florida senator wants to cap apartment rent increases at 3% per year, but it could be a longshot

After some Florida tenants have had their rent increase by as much as $1800 per month when their apartment lease came up for renewal, one Florida state senator is working on a bill that, if passed, would cap rental increases at 3% per year.

Minneapolis shoppers will have one less clothing store to purchase from as another popular fashion brand closes its doors for good. Ranjatm/Pixabay (Canva Pro license) Urban Outfitters just announced that it will be closing its store location at 3006 Hennepin Avenue in Minneapolis. According to local reports, the store is set to close its doors for good at the end of the day on June 20, 2022.

Nearly 12 percent of Temple University's student body identify as AAPI. Historically, the University has not offered courses specifically addressing AAPI history, experiences, or political issues. However, that's about to change.

Pennsylvania pet owners often wait up to 15 hours at "emergency vet" before pet is seen, here's why

Pet owners across Pennsylvania are reporting incredibly long wait times at "emergency" pet hospitals, sometimes as much as 15 hours or more. Read on to find out why this is the case.

A group of California middle school students started an activist organization to promote AAPI education in classrooms across the country. Now their initiative is getting national attention.

Should students be allowed to use cell phones while they are at school? Unfortunately, some Pennsylvania lawmakers don't think so and are working on passing a law to ban them. Fat Camera/Getty Images (Canva Pro license)

Six cities in Texas were ranked near the bottom of the latest U.S. News list of "Best Places to Live in the Nation." Read on to find out which Texas cities received poor "livability" ratings and why.

What would you do if your rent or mortgage went up more than $800 per month? Unfortunately, this is the reality for many Arizona residents. Rapid Eye/Getty Images (Canva Pro license)

Have you ever wished you could get clothing, cosmetics, and other items delivered from your favorite fashion brands without waiting for days? Finally, that dream may soon become a reality, thanks to Amazon.

This week, a new grocery store with a "farmer's market" theme had its grand opening in Orange County, Florida. Read on to get all the details. SimpleFoto (Canva Pro license) The popular grocery chain Sprouts Farmers Market just added a new location in Orange County this week at 2282 East Semoran Boulevard in Apopka, Florida.

The deadline for obtaining a REAL ID is approaching in less than a year away. However, only 19 percent of Pennsylvania residents have signed up for the federally required form of identification.

Aldi closes another grocery store in Tennessee this week

The popular discount grocery store chain, Aldi, announced earlier this week that it would be closing one of its Tennessee store locations. Bill Oxford/Getty Images (Canva Pro license)

This week, New Jersey is sending out additional patrols as part of the national "Click It or Ticket" campaign to ensure drivers wear seat belts and follow other safe driving rules.

Wisconsin man just ate his 32,944th McDonald's Big Mac, has no intention of stopping the habit

Could you imagine eating a McDonald's Big Mac every day for fifty years? Meet the Wisconsin man who did just that and recently celebrated eating nearly 33,000 of the fast-food burgers.

Sprouts Farmers Market, a popular regional grocery store chain in California, is closing two of its locations on June 3, 2022. Read on to find out which store locations will be affected by the closures.

Denver landlord raises rent $500 a month, refuses to negotiate with tenants because "other renters willing to pay more"

What would you do if you're monthly rent or mortgage payment increased more than $500 per month?. Antonio Guillem/Getty Images (Canva Pro license) Many families are struggling to find affordable housing and make ends meet these days. Denver is no exception. In the last year, apartment rents in the area have increased an average of $14.4%.

Gov. Wolf calls on residents to pressure Pennsylvania lawmakers to legalize marijuana for recreational use

Pennsylvania's Governor, Tom Wolf, has been pushing to legalize marijuana use for recreational use. The one thing standing in his way is the Pennsylvania legislature, which has yet to draft a bill addressing the issue.