The One Indisputable Talent Obama and Trump Have in Common 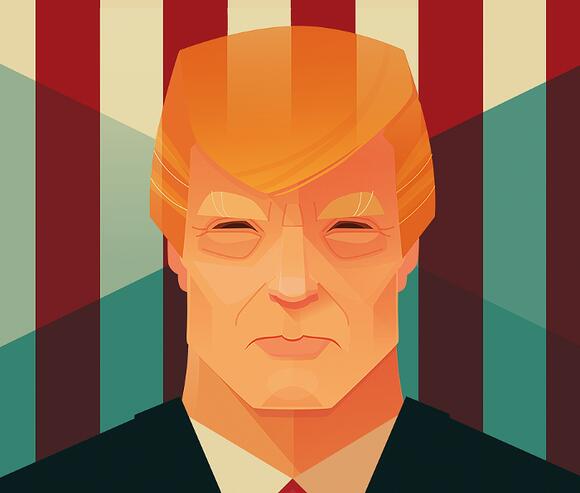 But before we proceed, no, we’re not talking about the talent for claptrappery. Only one of them possesses that skill in spades.

What we’re talking about is the talent for effective branding. The successful creation of iconic symbolism.

You don’t need to be shown an image of the “Hope” and “Change” posters again to know exactly what we’re talking about.

That, my friend, is effective imagery.

Meanwhile, the Examples Of Incompetent Branding

Now, quickly. What is the imagery that defines John McCain’s 2008 campaign run against Obama? If you’re like me, nothing comes to mind. And you probably don’t remember anything from the 2012 Romney campaign either. In fact, no one even remembers Hillary Clinton’s 2016 campaign.

It wasn’t until 2016 that another iconic political symbol was created. You guessed it — Trump’s “Make America Great Again” red hat.

Obviously, neither Obama nor Trump came up with their campaign’s graphics and imagery. That credit goes to their creative team. Well, maybe it was Trump who came up with the idea of the red MAGA hat. A lot of Trump’s creative brilliance is shrouded in mystery.

The skill which both Trump and Obama possess is their ability to spot creative talent. Consequently, they can channel that creative energy into their campaigns.

Taking Risk and Venturing Outside the “Tried and Tested”

Shepard Fairey was a street artist with a history of getting arrested for graffiti crimes. Still, the Obama campaign gladly welcomed him with open arms because they recognized Mr. Fairey’s talent as a branding genius.

In this video, we can observe how the Obama team expertly injected their message into Fairey’s work.

“Fortune favors the bold” as the saying goes, and none is bolder than the decision made by Obama’s team to embrace the look of pop-art for their campaign’s political branding over the more conventionally rigid style of traditional campaign graphics.

Even bolder was the fact that Shepard Fairey was really a mediocre artist at best. But like Banksy (whose talent comprises mostly of spray painting stencils on walls), Fairey was a fantastic self-promoter. The Obama campaign recognized that and went ahead to harness his branding talent.

The same pattern of thinking outside of the box can be observed in the Trump campaign. One of the least analyzed factors on Donald Trump’s political brilliance is his tendency to do things differently from other candidates.

Looking back on 2016, many were surprised when the usually libertarian-leaning Peter Thiel backed Donald Trump’s campaign. But for those who understand Peter Thiel, they’ll quickly recognize that one of Thiel’s main criteria of judging the likelihood for something to be successful is to seek out the bold and “contrarian idea” in a sea of uninspired mimicry.

Offering Something Different and New

Considering candidate Trump’s fondness for taking the contrarian route, it makes perfect sense for Thiel to back Donald Trump’s campaign. One could even say it was perfectly “on-brand” for Peter Thiel. Like Trump, the foundation of Thiel’s personal brand is demonstrated in his public image as a freewheeling outsider.

At the height of college mania, Thiel encouraged students to drop out of higher education. When MySpace was the de-facto social media site on the internet, he invested in Facebook. And while every other presidential candidate in 2016 pandered to the typical issues raised by the political consultant class, Trump went after the often forgotten and overlooked masses in middle America.

The red baseball cap was the perfect branding of the American working class. Down to the simple Times New Roman font emblazoned unpretentiously on a practical piece of garment, Trump’s “Make America Great Again” hats symbolize everything that is quaint about the American working class. And if you thought about it, the red MAGA hat isn’t that far removed from the formerly iconic New York Yankees hat.

We don’t talk about it much, but Trump essentially re-branded the Republicans into the party of the working class. Bernie Sanders and Alexandria Ocasio Cortez like to claim that their party stood for the working class, but it’s pretty blatant that the American socialist is a brand that is more relatable to the college-educated elites.

Getting Noticed by Giving Attention

So effective was Trump’s strategy of differentiation that even Michael Moore took notice of his messaging. Check out this unintentionally prophetic speech Moore made a few months before Trump won the Presidency.

In it, Michael Moore warned his audience about Trump’s imminent victory. Why? Because Trump spoke to the forgotten. He paid attention to the masses who were ignored by the political elites.

While the political consultant class sold out the American people to the establishment, Trump’s campaign bought into the dreams of the everyday American. The common American man and woman were to be the most important aspect of Trump’s presidency.

Hence by branding himself as a symbol of hope for a better America in the future, the “Make America Great Again” campaign successfully made Donald Trump the symbol of the working man’s hero.

In fact, just the mere discussion of Donald Trump would by itself, raise the level of reader’s interest in this article. And that, my friends, is effective branding.

This will be an ongoing series on the principles of good design applied to political messaging.

Additionally, check out our games here. Peter Thiel famously cited Virtue Signal: The Game as “A game for those who are ready to wake up from woke”