(Forsyth County, GA) Forsyth County residents are getting a new look at the proposed mega spa to be built at exit 13 off Georgia 400.

On May 17, team members representing Passport Experiences and County officials held a public participation meeting at the Old Atlanta Road Recreation Center about the Passport Springs & Spa project. Advertised as the largest spa in North America, the project will be developed on Ronald Reagan Boulevard adjacent to The Collection.

Zoning attorney Ethan Underwood opened the meeting and discussed various conditional use permits and variances required by the project’s unique landscaping needs. During this discussion, the CEO of Passport Experiences, Jacob Bloch, revealed the first public glimpse of the development’s planned exterior. 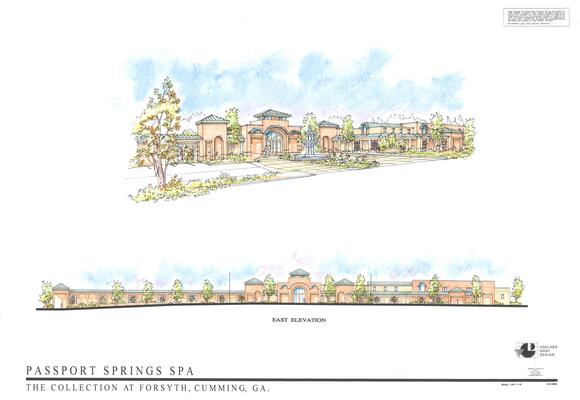 New renderings show the proposed exterior of the project.(Photo/Passport Experiences)

As the rendering shows, Passport Springs & Spa will be integrated into The Collection. The outward-facing architecture of the project will relate to the design themes already in place there for a harmonious appearance.

Once inside, however, visitors will feel like they have stepped into another world. There will be four pavilions each representing an exotic global travel hotspot: Israel, Japan, Costa Rica, and Rome. All four pavilions will have enclosed, partially enclosed, and shaded areas with landscaping, spa experiences, and food and beverage options tailored to those locations. The Passport Pool, an oversized enclosed pool with glass walls, will connect all four pavilions.

Mr. Bloch provided an overview of some of the features planned for each pavilion. Guests will enter the Israel pavilion through a Jerusalem walkway, visit a replica of the Dead Sea and its mud baths, and enjoy Middle Eastern foods like falafel and shawarma. The Japanese pavilion will feature colorful hanging lanterns, a sake bar, covered pools and pagodas, and experiences like steaming sand massage. In the Rome pavilion, guests can relax in the courtyard or covered porticos or explore a replica of the Pantheon and salt caves. The Arenal-inspired Costa Rica pavilion will have a greenhouse to show off tropical plants, waterfalls, a bar with stone seating, and The Grotto, a cave network of saunas, steam rooms, snow rooms, and a salt cave.

There will also be a traditional spa facility with private treatment rooms and a secure locker area where guests can keep their belongings. Other features of the project include a rooftop bistro, lazy river, and multiple food and beverage stations that will offer upscale, elevated fusion cuisine.

Design experts Todd Voelker and John Gray of Voelker Gray Designs were on hand to answer residents’ questions. Well-known for their work on the Glen Ivy Hot Springs in California and Cabo Azul in Mexico, Mr. Voelker and Mr. Gray addressed the unique challenges of designing a hot springs project for the Georgia climate.

“We can design the facility so that there are comfortable spaces,” regardless of the weather, said Mr. Voelker. They also shared details about some of the unique elements of Passport Springs like smart lighting designed to mimic circadian rhythms throughout the day.

After the presentations, residents had a chance to ask questions. In response, Mr. Bloch shared that the facility will permit approximately 600 guests at a time. Most of the facility is envisioned for adult use only, though there may be opportunities for children to visit on certain occasions.

Guests will receive a wristband at check-in that provides access to all areas of the facility, though there will be supplemental fees for specific experiences. Day passes, membership and club options will be offered, but pricing information is not yet available.

When pressed about why Passport Experiences chose this particular location, Mr. Bloch pointed out the ease of access to major highways, the ability to join the facility to The Collection, and the hotels within walking distance. He also repeatedly mentioned that Forsyth County is “the most beautiful county” and that the people here “shared his vision.” The project will be self-managed because his team wants to be a part of the community long-term.

When asked about the project’s budget, Mr. Bloch said that he didn’t yet know the project's total cost and that the team was guided by creating “elevated” experiences, not a set spending limit. His team also said that sources of capital for the project are proprietary information and will be kept private for now. Mr. Bloch did reveal, however, that he has already been contacted by groups around the country for large bookings, though they are not yet accepting reservations.

The team also discussed the project’s projected economic impact on the county. Their report estimates that there will be an annual $69 million economic output, not counting property and sales tax revenues. The venue plans to employ several hundred people and is interested in hiring local talent.

Construction is scheduled to begin in the fall. Passport Springs Spa is expected to open in fall 2023. The next public meeting will be a hearing on June 21. The location has not yet been announced.

What questions do you have about the Passport Springs & Spa project? Comment below or email me at kbondwriter@gmail.com.

(FORSYTH COUNTY, GA) Looking for a free summertime event that’s “out of this world?”. The Sharon Forks Library branch of the Forsyth County Public Library system will have actual moon rocks available for patrons to examine at the “Oceans on the Moon?!” program on Tuesday, June 28 at 6:30 pm.

(FORSYTH COUNTY, GA) The Girl Scout Gold Award is the most prestigious award that a Girl Scout can receive, earned by fewer than 6% of Girls Scouts each year. Clara Hamilton, a rising senior at Forsyth Central High School, recently joined this elite group after completing the new Forsyth County History Walk at the Sawnee Mountain Preserve Visitor Center.

Higher Forsyth County property tax assessment? Find out why it's gone up, plus get tax tips

(FORSYTH COUNTY, GA) As anyone looking at real estate recently knows, home prices have been on the rise. In Forsyth County, the average home price increased 21.62% in the past year.

(FORSYTH COUNTY, GA) The splash pad at the Old Atlanta Road recreation center re-opened on June 21, just in time to help families beat another heat wave. It had been closed since June 6 when a faulty pump put the popular summer spot out of commission.

(FORSYTH COUNTY, GA) Another new development for Georgia’s fastest-growing county was recently announced. Winners Circle Park is a 62-acre sports campus planned to open in south Forsyth County in spring 2023. Located near the Peachtree Parkway and Brookwood Road intersection in the southern part of the county, Winners Circle could bring more than 500 new jobs to the area and an estimated 750,000 visitors each year.

(FORSYTH COUNTY, GA) Families hoping to have some fun at the Old Atlanta Road Recreation Center splash pad will have to find another way to stay cool for a while. TheParks and Recreation Department announced earlier this week that the splash pad is closed effective June 6, 2022, until further notice due to unexpected repairs.

(FORSYTH COUNTY, GA) Now that school is out, many Forsyth County children are enjoying the newfound freedom and laid-back schedule that come with sunny summer days. While the parks and playgrounds are packed, there’s one slide parents want their kids to avoid - the “summer slide.”

(FORSYTH COUNTY, GA) Few people can understand what families fleeing Ukraine are going through better than Vasily Lantukh. Thirty-two years ago, Vasily fled from Ukraine, which was still then part of the Soviet Union, to the United States. All he could bring with him was his family—four children and his pregnant wife, Marya.

Forsyth County moms help each other during baby formula shortage

(Forsyth County, GA) Over the past two years, Forsyth County residents have had to deal with inconvenient shortages and purchase limits due to the COVID-19 pandemic and other supply chain challenges. But arguably nothing has been as stressful for parents as the current baby formula shortage.

(Forsyth County, GA) Do you have questions about the new Passport Springs and Spa project? If so, you have a chance to ask them in person at a public participation meeting on Tuesday, May 17 at 7 p.m. The meeting will be at Old Atlanta Recreation Center at 810 Nichols Road in Suwanee, across from Lambert High School.

(Forsyth County, GA) With the opening of the new Alimera Sciences headquarters in Halcyon, Forsyth County has become the home of a global pharmaceutical company. Alimera leadership team representatives and local leaders celebrated the new facility with a ribbon-cutting ceremony on May 9 Located in the 1200 office building next to Town Square, Alimera’s space now has a fresh, contemporary appeal as innovative as the company itself.

For some Forsyth County families, hybrid schools offer the best of both worlds

(Forsyth County, GA) On a sunny day that feels more like summer than early May, Dr. Melissa Shipman is smiling outside the building that will soon become the new home of Learnwell, a hybrid school serving the Forsyth County area. The school, which began in 2017, started as a way to support homeschooling families virtually with teaching tips and curriculum ideas. But in 2021, Dr. Shipman and her family took a leap of faith and opened a physical location at the Bluegrass Village office park.

(Forsyth County, GA) With the last day of school just around the corner, Forsyth County kids are hearing the siren song of summertime. However, along with those cherished weeks of freedom come childcare challenges for some families and struggles with boredom for others. Fortunately, there is no shortage of summer camp options in Forsyth County. These camps offer many different opportunities for summertime learning, enrichment, social interaction, and – most importantly – lots of fun. Here’s our rundown of some of the top options that still have openings this summer:

FoCo Parents: School's almost out, have you registered for summer camps?

(Forsyth County, GA) With May just around the corner, Forsyth County kids are hearing the siren song of summertime. However, along with those cherished weeks of freedom come childcare challenges for some families and struggles with boredom for others. Fortunately, there is no shortage of summer camp options in Forsyth County. These camps offer many different opportunities for summertime learning, enrichment, social interaction, and – most importantly – lots of fun. Here’s our rundown of some of the top options:

(Forsyth County, GA) Ready for a spa day? If you live in Forsyth County, the biggest spa in North America may soon be coming to your own backyard. An Atlanta-based startup, Passport Experiences, recently proposed a 10-acre spa and hot springs complex along Ronald Reagan Boulevard near The Collection. The development is scheduled to open in fall 2023.

Work continues on the new Chick-fil-A(Photo/Kimberly Bond) (Forsyth County, GA) Chick-fil-A lovers in Forsyth County will soon have a new restaurant to visit. The Lanier Crossing location at 653 Atlanta Road in front of Hobby Lobby will close at the end of April, and the team will be moving to a brand new building just down the street next to Goodwill on Atlanta Highway.

Lidl grocery store opening soon(Kimberly Bond) Forsyth County residents will soon enjoy a new grocery shopping experience at the Lidl opening at The Shops of Kelly Mill. Located at the corner of Bethelview Road and Kelly Mill Road, Lidl will be the first small specialty grocery store in the western part of the county.