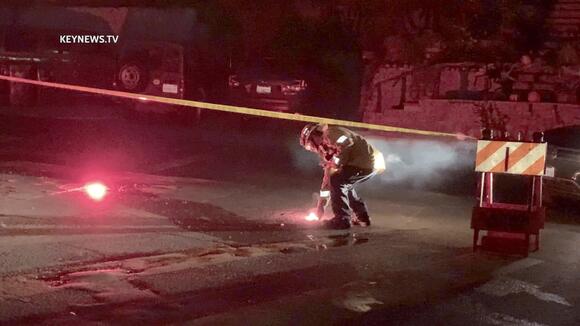 Arcing power lines cause a power outage in parts of Laurel Canyon on a predicted gusty Monday evening.

According to a firefighter at the scene, residents in the area of lower Wonderland Avenue called the fire station around 5:30 p.m. reporting loud arcing sounds. Small sparks were visible as a tree branch rubbed against power lines during strong wind gusts. Around that time, power flickered on and off a few times, then off for a duration of approximately 4 hours for many residents in the surrounding area.

Firefighters remained at the scene monitoring the situation until the Los Angeles Department of Water and Power could arrive. Around 8:30 p.m., LADWP crews arrived at the location to address the overhanging branch and power lines. Power gradually returned to the affected streets by approximately 10:00 p.m.

Firefighters battle a structure fire that appears to be a marijuana grow operation in Canoga Park on North Canoga Avenue Monday afternoon.

An 18-month-old boy was fatally struck by a vehicle as it 'bounced' into a wall during a two-vehicle collision in North Hills early Sunday morning.

An officer-involved shooting occurred with an armed suspect who had a hostage during a standoff with police at an encampment in Downtown Los Angeles early Thursday morning.

One person is dead, one wounded in a shooting at Avenue Hotel in East Hollywood just before midnight Monday.

A deputy-involved shooting occurred during a disturbance call on Chicory Court in Stevenson Ranch Sunday evening.

Firefighters worked to contain a brush fire in the Hansen Dam area that started as a rubbish fire Saturday night.

A person was reported deceased after an RV crashed into the Santa Clara riverbed on Jakes Way and Lost Canyon Road late Monday morning in Santa Clarita.

An early Tuesday morning water main break in Koreatown sent gallons of water into the street and curbside under parked vehicles.

One male suffered a gunshot wound to the chest in a shooting Monday night at 3rd Street and Alameda in Downtown Los Angeles.

Residents are concerned that safety issues are at stake and the community will be divided with the proposed city council redistricting of the Laurel Canyon neighborhood.