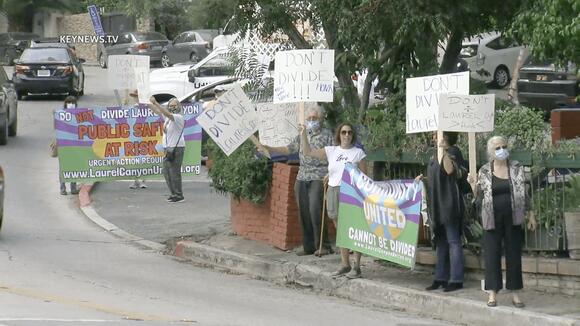 Residents are concerned that safety issues are at stake and the community will be divided with the proposed city council redistricting of the Laurel Canyon neighborhood.

A group of approximately 25-30 residents peacefully protested their concerns that the redistricting will divide the community leaving the rest of the neighborhood as part of another council district. Many voiced concerns over safety issues in the canyon that include fires, downed trees and power outages. The proposed new city council redistricting map on the Los Angeles County City Council Redistricting Commission 2021 website shows the division down Laurel Canyon Boulevard.

Kristen Stavola, Co-founder of Laurel Canyon United, interviewed by Key News at the protest location said the community has a very short time to make their voices heard to the redistricting commission. She said a draft map that "came out of nowhere" on Tuesday night, proposes the redistricting split right down Laurel Canyon Boulevard.

'We've done so much work to unify this neighborhood," Stavola said, standing in front of the Canyon Country Store, a local market where many LC residents meet for coffee and socialize, as well as patronize the store. "This will now be (referring to the store side of the boulevard) part of Hollywood Hills West, and across the street will be Laurel Canyon."

"There's so much development happening and it's really important right now that we come together as an entire hillside community and protect our ridge lines, our wildlife, our open space, and public safety is the most important issue."

"Laurel Canyon does not want to be divided," stated Stavola. Laurel Canyon United website can be found here .

A high speed single-vehicle collision is being investigated as a hit-and-run after leaving a path of destruction in Hancock Park early Tuesday morning.

Tree Falls on Maserati in Brentwood

A large tree fell on a Maserati in Brentwood Monday evening.

First rainstorm of the season floods roadways and poses a concern for burn scar areas in parts of California.

1 Killed, 5 Injured After Vehicle Slams into a Van Nuys Restaurant

One patron inside a Van Nuys restaurant was struck and killed by a vehicle that crashed into the building Sunday evening on North Woodley Avenue.

Firefighters battle a structure fire that appears to be a marijuana grow operation in Canoga Park on North Canoga Avenue Monday afternoon.

An 18-month-old boy was fatally struck by a vehicle as it 'bounced' into a wall during a two-vehicle collision in North Hills early Sunday morning.

Arcing power lines cause a power outage in parts of Laurel Canyon on a predicted gusty Monday evening.

An officer-involved shooting occurred with an armed suspect who had a hostage during a standoff with police at an encampment in Downtown Los Angeles early Thursday morning.

One person is dead, one wounded in a shooting at Avenue Hotel in East Hollywood just before midnight Monday.

A deputy-involved shooting occurred during a disturbance call on Chicory Court in Stevenson Ranch Sunday evening.

Firefighters worked to contain a brush fire in the Hansen Dam area that started as a rubbish fire Saturday night.

A person was reported deceased after an RV crashed into the Santa Clara riverbed on Jakes Way and Lost Canyon Road late Monday morning in Santa Clarita.

An early Tuesday morning water main break in Koreatown sent gallons of water into the street and curbside under parked vehicles.

One male suffered a gunshot wound to the chest in a shooting Monday night at 3rd Street and Alameda in Downtown Los Angeles.