Karen Madej is a writer and editor for several publications on various platforms. She enjoys writing about politics and climate change. Her goal is to help feed as many homeless people as possible and campaign for Universal Basic Income at every opportunity, while also giving the UK government a hard time through petitions.

Detroit, MI, claims the title of the most violent city for the second year but tourists dug the Motown scene

This city fascinates me for the wild contrasts present in its history and more recently. Sadly, the knowledge that 1 in 51 people in the city experienced a violent crime in 2020 would be enough to discourage many from visiting for sightseeing.

Would you want to visit a city famous for aggravated assault, armed robbery, rape, and murder? Perhaps the danger is the magnet that draws in the morbidly curious. However, the architecture, local craft beer, and tasty eats also attracted 19 million tourists in 2016! The Henry Ford museum alone attracted 1.8 million visitors in 2019, and let's not forget Detriot's famous Motown Museum.

Of the different violent offenses committed in 2020, according to the Detroit Government, Part 1 Crimes File, Detriot had 13% more Part 1 violent crimes than in 2019. But 21% fewer robberies and 9% fewer carjackings. Non-Fatal Shootings went up by 53% in 2020 compared to 2019 and Detroit saw an increase of 19% more homicides.

Good news for homeowners last year, though, because Part 1 property crimes fell by 24% and the number of vehicles stolen reduced by17% in 2020.

While it might cause worry to know 102% more gun-related arrests were made in quarter 3 of 2020 than in the same period of 2019, you'll be relieved to hear the non-fatal shootings rose by 53% whereas homicides increased by only 19%.

Unfortunately, any facial recognition technology private for-profit companies use may be banned in the near future, especially with U.S. Rep. Rashida Tlaib on the case.

Amnesty International launched a campaign to ban the use of facial recognition systems in January 2021, stating that "the technology is invasive, turns our identities against us, and undermines human rights. It also runs the risk of being weaponized by law enforcement." 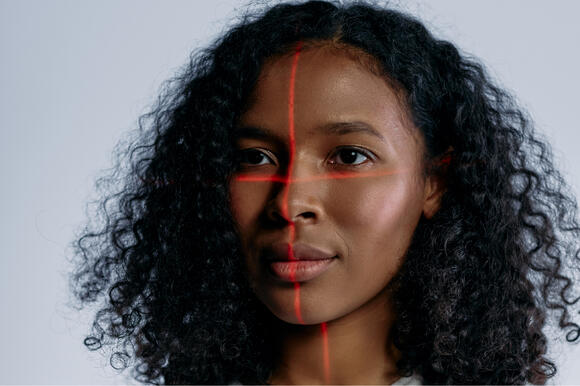 Photo by cottonbro from Pexels

In May, members of the bipartisan U.S. House Oversight and Reform Committee all voted to request a ban across the United Stated of any systems that use facial recognition. At least until experts have evaluated the software and regulations put in place to protect the privacy of individuals.

"Policing our communities has become more militarized and flawed. Now we have for-profit companies pushing so-called technology that has never been tested in communities of color, let alone been studied enough to conclude that it makes our communities safer." Rashid Tlaib

This particular video may or may not be helpful in identifying the use of a lethal weapon to spray a parked vehicle with the driver inside.

On the positive side of the coin, tourists adore Detroit architecture and I can see why.

The stunning Art Deco architecture of the Guardian Building (aka Cathedral of Finance because of its resemblance to a cathedral) decor would attract Tiffany lovers. Tiffany designed the clock in the center of this Monel metalwork.

A mosaic of a pine tree and text by Ezra Winter, behind the security guard's desk in the lobby, states the purpose of the Union Trust Company:

"Founded on principles of faith and understating, this building is erected for the purpose of continuing and maintaining the ideals of financial services which promoted the organization of the institution".

You can book an all-singing, all-dancing (literally) tour at the Motown Museum.

If you are a fan of Motown memorabilia the current limited-time exhibit Capturing a Culture Change: Motown Through the Lens of Jim Hendin covers the cultural history of the 60s and 70s featuring photographs, authentic equipment, and "art"ifacts.

Last, but definitely not least, Hitsville U.S.A. where you can tour the legendary home of Berry Gordy and Motown Sound.

Karen Madej is a writer and editor for several publications on various platforms. She enjoys writing about politics and climate change. Her goal is to help feed as many homeless people as possible and campaign for Universal Basic Income at every opportunity, while also giving the UK government a hard time through petitions.

Dawn Butler was removed from Parliament chambers for 24 hours because she called Boris Johnson a liar and refused to retract her accusation. She could also have avoided her removal if she’d reflected on her words and withdrawn them as warned by the temporary deputy speaker, Ms. Cummins.

Do you sometimes wonder where all your time goes?

How many hours do you spend searching for the white rabbit when you should have abandoned the idea or chosen a different angle?. Say you are looking for a study or reliable source to spice up your homework or your course work. You want to make a point backed up with proof you are right. Maybe you’d like to wow your friends with an exciting music video or weird facts.

What would you say if someone asked: "How can I help you?"

If you don't ask, you don't get. This works both ways. The new chief of a hospital in a TV show called New Amsterdam asked the question, how can I help you?. Despite the title of the episode being called, How Can I Help You? it was still a surprise to hear it asked.

Will China’s 20% aluminum output reduction cause a shortage of Coca-Cola cans and fire-resistant wrap in the US?

In July 2020, according to USA Today, despite plenty of aluminum, can producers were unable to meet production requirements. Loyal Coca-Cola customers, unable to buy their soda in the shuttered venues they visited pre-pandemic, increased their consumption at home.

Avoid eviction, pay 25% and apply for up to 18 months of rental assistance in San Francisco before 30th September 2021

Housing is key states: Qualifying renters and landlords are now eligible for 100% of rent and utilities owed. To find out which program your neighborhood qualifies for, you'll need to enter your area and click search or select your area on the map.

A Swiss-owned conglomerate has piped water from San Bernadino Forest to land outside of the forest border illegally since 1988. They’ve taken between 50 and 150 million gallons per year and pay the forest service $2,100 per year for forest land use. This does not include water rights. Nestlé Waters stole water from the forest. The catastrophic results of drought, wildfires, and loss of homes and lives play out annually. Nestlé Waters and BlueTriton’s profit over people approach must be stopped.

British chain Morrisons $9.64 billion takeover bid by US firm compared to selling in San Francisco and buying in Seattle

First, Morrisons turned down £6.3 billion because their biggest shareholder didn’t like the offer, then the board backed the second offer. A megadeal worth £6.7 billion. A last-minute £7 billion bid beat the consortium of investment bidders backed by US billionaire Koch family and Japanese mogul Masayoshi Son.

Off-grid, self-sustainable homes for now and the future

The Garbage Warrior, aka Michael Reynolds, has a vision of the future. People abandon crumbling structures in cities and the only reason they’d return to a city would be to scavenge for items to enhance their Earthships.

In the middle of the battle between the folks who gratefully got the vaccination and the folks who think they don't need to get vaccinated, sits another group of Americans. People without cars.

Existing staff do 16-hour shifts 3 times a week. Quality of life crimes are not just happening in the streets but in jail, hospitals, and the ambulance service. It's mandatory to have 8 hours off after a 16-hour shift. But what can San Francisco's finest do with those 8 short hours?

A local who rode on one of the new trains said it even smelled cleaner. This evoked several stories from other folks of their sensory experiences of individual BART cars. One involved motion sickness induced vomiting and another had a migraine and didn't manage to get off before throwing up.

Support your local businesses by signing up and saving the date for Zoe and Mitch's hand-building pottery classes at the end of August. Mason Street ceramicist, Samantha Lee, is the owner of Dusted and Blue. Sam creates, teaches, and tends to a community of potters. The community business offers include pottery classes and memberships. When Sam isn't making pottery or pen drawing landscape illustrations she is out walking with her dog, Harper.

The SFPD doesn't know where or when a sideshow will happen. Officers are dealing with calls all over their parts of the city at any time of the day or night. When calls start coming in about a sideshow there's little in their power they can do.

San Franciscans missed the sounds of the cable cars on their local routes. Some are even taking a ride just for the fun of it! RichieNRich found it so heartening to see families queue up at the Powell turnaround waiting for one of the two cars running from there.

$10,000 reward for safe return: Frenchie Bulldog Bruce lost in San Francisco on July 26, have you seen him?

According to his owner, 6-month-old chocolate brindle Bruce went missing around 5 PM while being looked after by his Rover.com sitter. His owners were away at the time it happened but flew back home on the day he went missing to hear the heartbreaking news.

Driving while Black in Florida, data proves police racially profiled based on their assumption about minorities

"Each one of those stops had nothing to do with breaking the law. It's like somebody pulls your pants down around your ankles. You're standing there nude, but you've got to act like there's nothing happening. The worst thing you can do in a situation like that is to become emotionally engaged, because if you do something, maybe they're going to do something else to you. It doesn't make a difference who you are. You're never beyond this, because of the color of your skin." – Michael, 41, chief executive of municipal agency.

Naturalist guide Aaron Bott, who lives and works in the Greater Yellowstone Ecosystem tells us the grizzly bear population is 700-800, maybe even 1000 now. Wouldn't death by bear be a more likely reason the elk numbers went down so dramatically? Older elk would die off, and a lot fewer calves survived to replace them. Thus the 20,000 elk reduced to 5,000 by the late 2000s. But hold your horses. There's more.

Did Yellowstone wolves really bring down 80% of the elk population all on their own?

In a previous post, Whites Are The Original Immigrants I mentioned Yellowstone National Park and the reintroduction of wolves. In response to the story, I received the following comment:

By Ajay Suresh from New York, NY, USA - Manhattan Mall, CC BY 2.0. New York restauranteurs who created pavement pods last year kept their businesses alive. Diners want the sidewalk buildouts to stay free of cars. After the first lockdown when restaurants started reopening, the city supported them by allowing parking spaces to be used for their pods instead of cars.

What have San Francisco's Giants and Zero Waste got in common?

We see recycling receptacles every day. On the street and in the office. We know we should do it, but do we? Perhaps you work full-time or have a family and work part-time, maybe you're single and an avid recycler or you sling everything into the main trash can.