Reading ‘Horton Hears a Who!’ as a Gay Dad to Piss Off Dr. Seuss 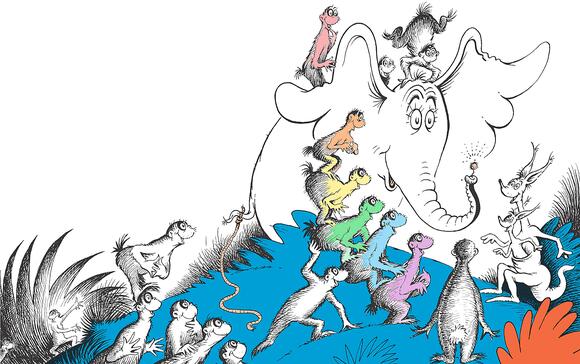 This is part three of a series where we reclaim the problematic narratives of well-known Dr. Seuss books. From exoticism to blackface, Dr. Seuss’ bigotry was implicitly reflected in the storylines, messages, and illustrations of the children’s books that we have been reading for generations.

For this installment, we will be reread Horton Hears a Who, the classic tale that Dr. Seuss originally wrote to address his anti-Japanese sentiments. Instead of reinforcing the white saviorism of Horton Hears a Who, we will look at Horton and the Whos in an entirely different way — one that Dr. Seuss may not have been too happy with, but one that shares a much more uplifting message nonetheless.

Horton is a gay single elephant and an accidental adoptive father. One spring day, while going for a swim, Horton’s eye catches something out of the ordinary floating through the air, and he can't bring himself to ignore it. It’s a small, pink speck of dust emitting a barely audible yelp, which Horton determines is a tiny person calling out desperately for help. Even before coming to the realization that the speck of dust is actually home to not one tiny person, but an entire civilization of Whos, Horton’s fatherhood instincts kick in, and he rises to the occasion gracefully.

“So, gently, and using the greatest of care, the elephant stretched his great trunk through the air, and he lifted the dust speck and carried it over and placed it down, safe, on a very soft clover.”

Horton’s life-altering journey to becoming a de-facto father for the speck of dust is not unlike that of a single gay man adopting a child. Though Horton was more than prepared to father the speck of dust, he did not even get 24 hours to mentality prepare for the day he would meet it — which is actually a realistic representation of the drastic nature of domestic adoption and the fostering process in the United States. After being officially approved to be a adoptive or foster parent/family, you can expect to recieve a phone call at any point, and less than a week later, you could very well have a child in your arms, that is of course if you agree to the proposed arrangements. These circumstances are prevalent in Horton’s case as well, in fact they came to him literally out of thin air. He had to quickly make the decision to rescue or overlook a potentially endangered speck of dust swiftly passing by in the wind.

“Then he heard it again! Just a very faint yelp, as if some tiny person were calling for help. ‘I’ll help you,’ said Horton.”

But Horton’s unwavering selflessness is fraught with haters and headshakers. Immediately, a sour kangaroo mother questions Horton’s intentions to father the speck of dust, refusing to believe it’s in need of a caretaker. Because she’s a mother, she believes she has the authority to judge Horton’s parenting instincts. The sour kangaroo represents strangers who decide that gay people aren’t capable of raising children properly, simply due to human nature. For Horton, it’s because he’s a foolish elephant, and Whos are “too small to be seen by an elephant’s eyes.” For many gay individuals, it’s because of their gender and sexuality.

“Through the high jungle tree tops, the news quickly spread: ‘He talks to a dust speck! He’s out of his head! Just look at him walk with that speck on a flower!’ And Horton walked, worrying, almost an hour.”

The fact that the one speck of dust is home to the entire Who civilization is a fitting metaphor for the foster care system in America, and the thousands of orphans that are in need of a loving home, shouting “We Are Here! We Are Here!” over and over again, like the Whos do, to get everyone in Jungle of Nool to hear them. Despite this disheartening and unfortunate reality, there is still a concerning amount of people who are fervently against gay adoption because they care so deeply about children being raised by “real” parents, and not in the absence of a strong (straight) father figure or a nurturing (straight) mother.

“Some poor little person who’s shaking with fear that he’ll blow in the pool! He has no way to steer! I’ll just have to save him. Because, after all, A person’s a person, no matter how small.”

Instead of focusing their attention on the 700,000 children in foster care going to loving homes, they focus on the “destruction” of the traditional heterosexual household. Just like how The Wickersham Brothers and Vlad Vladikoff the black-bottomed bird care more about arresting a gay single dad (Horton) and separating him from the speck of dust, than they care about the well-being of the Whos. But without people like Horton, the Whos who had been abruptly uprooted from their homes, would remain in danger. Without adoptive mothers and fathers, some of whom happen to be gay, the number of children in foster care without loving, caring, selfless, capable parents would increase even more.

“‘Grab him!’ they shouted. ‘And cage the big dope! Lasso his stomach with ten miles of rope! Tie the knots tight so he’ll never shake loose! Then dunk that dumb speck in the Beezle-Nut juice!’”

Horton’s adoption of the speck of dust, a seemingly tiny act literally and figuratively, actually ended up making a huge difference in the scheme of things, illustrating the impact of domestic adoption and fostering. It’s one less kid in the system, one more kid with a better future, and one step closer to ending the cycle. Not only that, Horton sets an example for the other animals in the Jungle of Nool who had previously doubted him, inspiring even the sour kangaroo mother to step up her parenting game.

“‘How true! Yes, how true,’ said the big kangaroo. ‘And, from now on, you know what I’m planning to do? From now on, I’m going to protect them with you!’ And the young kangaroo in her pouch said, ‘ME, TOO!’”

Children are like little sponges, and there’s no arguing that education opens minds. In the third grade, the novel Charlotte’s Web by E.B. White did exactly that, inspiring me and the rest of my 8-year-old classmates to become vegetarians.

An Updated List of the Top 5 Party Schools in the U.S. (According to How They’re Handling the Coronavirus)

19 of the 25 worst U.S. coronavirus outbreaks are in college towns, so if applying to party schools is the top priority of your college search, you’ll want to jot these ones down.

Reading the Grinch as Gay to Piss Off Dr. Seuss

If you think I’m about to ruin your childhood by reading the Grinch as gay character, you’d be even more disappointed to discover the truth about Dr. Seuss. Did you know that The Cat in the Hat was based on blackface performance, and that The Sneetches was originally written as an anti-Semitic narrative? Did you know that And to Think That I Saw It on Mulberry Street, originally published in 1937, was undergoing revisions by Random House until 2017, due to the breadth of its bigotry in both text and illustrations?

7 Cocktails to Overcome Writer’s Block, Based on the Favorite Drinks of Famous Authors

I used to believe that I couldn’t possibly churn out a good piece of writing unless I was doing so in a coffee shop in between sips of iced coffee. That was until the coronavirus caused the closure of my local Starbucks, and I was forced to set aside my Basic Bitch of a habit and drink coffee at home like a normal person. This led me to the life-shattering realization that it wasn’t so much the atmosphere as it was the drink that fueled my creativity.

It doesn’t come as a surprise that a growing number of today’s bestselling books were originally written as fanfiction. Fifty Shades of Grey by E.L. James was originally Twilight fanfiction, The Mortal Instruments series by Cassandra Clare was based on the Harry Potter novels, and After by Anna Todd was first published on Wattpad in the #OneDirection category. But writing fanfiction hasn’t always been a practice reserved for contemporary authors of beach reads and YA novels. Did you know that one of the greatest literary works of all time, Dante’s La Divina Commedia, written over 700 years ago, was actually a “Rated M for Mature” three-part fanfiction?

Every day in high school, as soon as the dismissal bell rang at 3 o’clock, I’d gather my belongings from my locker and head to the computer lab or the school library to do my homework.

Reading ‘Gertrude McFuzz’ as Trans to Piss off Dr. Seuss

In the last installment of the "Sorry Dr. Seuss" Series, we learned that The Sneetches was originally anti-semitic, The Cat in the Hat was inspired by blackface, and many of Dr. Seuss’ most well-known books are filled with problematic illustrations and hidden messages disguised as wholesome life lessons portrayed through the shenanigans of fun-loving, quirky characters. To continue the trend of reclaiming the narrative, this time, we’ll reread Gertrude McFuzz as a trans character.

Reading ‘Green Eggs & Ham’ as an LGBT Narrative to Piss off Dr. Seuss

The truth is, no matter how much you love his books, Dr. Seuss had a misguided approach to teaching life lessons about tolerance, individuality, and standing up for what you believe in. Many of the most beloved Dr. Seuss stories, that have been read to generations of children, are actually peppered with problematic subtext:

What Would Oscar Wilde Think of Harry Styles?

Would his gaydar be going off? Would he frown upon the new hedonism of the Watermelon Sugar music video?. There’s no doubt that Oscar Wilde, whose work is heavily influenced by the philosophies of aestheticism, would have something to say about Harry Styles, the singer whose evolution embodies Wilde’s idea that “Each of us has heaven and hell in him.”

Why You Should Always Go Running Outside in the Summer

Back in March, as many others have done, my gym closed its doors due covid-19. I was left to fend for myself, alone in the Arizona desert, far away from the reliable confines of a 24-hour gym. Regardless, the gym still had the nerve to charge me the same monthly membership fee, in exchange for “The chance to win a $100 Amazon gift card every month, as incentive to exercise,” which by the way I still haven’t won.