Reading ‘Gertrude McFuzz’ as Trans to Piss off Dr. Seuss 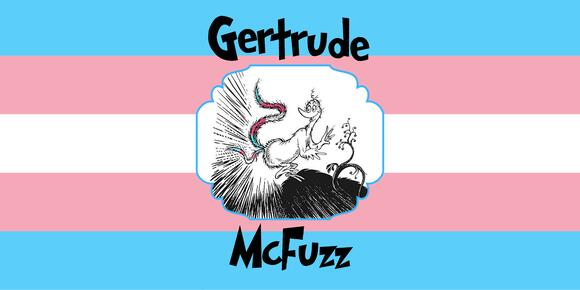 In the last installment of the "Sorry Dr. Seuss" Series, we learned that The Sneetches was originally anti-semitic, The Cat in the Hat was inspired by blackface, and many of Dr. Seuss’ most well-known books are filled with problematic illustrations and hidden messages disguised as wholesome life lessons portrayed through the shenanigans of fun-loving, quirky characters. To continue the trend of reclaiming the narrative, this time, we’ll reread Gertrude McFuzz as a trans character.

Gertrude McFuzz is the protagonist of the second storyline in Yertle the Turtle. She’s also a trans icon with a symbolic journey.

Dr. Seuss introduces Gertrude McFuzz as a “girl-bird,” who feels extremely uncomfortable in her own skin, specifically due to the appearance of her tail, which is all but a short, singular, “droopy-droop feather.”

“She frowned. And she pouted. Then, one day she got awfully mad and she shouted: ‘This just isn’t fair!’”

Whenever Gertrude sees the long, two-feathered tail of a “birdie,” she becomes filled with unsettling jealousy, because she knows that changing her tail is what will make her feel complete. These moments indicate that Gertrude experiences dysphoria, a sense of overwhelming distress and conflict that occurs when an individual’s biological or gendered characteristics don’t align with their emotional and psychological sense of self.

To seek help in relieving her dysphoria, Gertrude turns to a trusted family member, her uncle, who also happens to be a doctor.

“She cried, ‘Uncle Doctor! Oh, please do you know of some kind of a pill that will make my tail grow?’”

Clearly desperate for medical intervention, Gertrude pleads to her uncle to prescribe her birdie hormones to help her transition. At first, her uncle quickly shrugs off Gertrude’s distress.

“Such talk! How absurd! Your tail is just right for your kind of bird!”

Gertrude’s first conversation with her uncle represents the typical experience of many trans youth, in which their most trusted family members initially dismiss their dysphoria as just a phase.

However, fortunately for Gertrude, her uncle is also a doctor. After a careful re-deliberation, Uncle Doctor permits Gertrude to take pill-berries to make her tail grow, though his actions later prove he only agreed to her pleas in an attempt to prove her wrong.

As soon as Gertrude begins taking pill-berries, her demeanor changes twofold. Even though she is still in the first stages of her transition, with minimal feather growth, Gertrude’s happiness and peace of mind emerges effortlessly, “as if she’d been tapped, down behind, by a switch.” Thanks to the pills, Gertrude can finally live her truth.

“Then the feathers popped out! With a zang! With a zing! They blossomed like flowers that bloom in the spring. All fit for a queen! What a sight to behold! They sparkled like diamonds and gumdrops and gold!”

This is where the story should realistically end. But Dr. Seuss unfortunately decided that it would be appropriate to make Gertrude regret her transition when she realizes it will never give her complete happiness. Dr. Seuss inaccurately depicts that after she experiences a short-lived state of euphoria, her mental and physical wellbeing takes a turn for the worse. Gertrude suffers grave medical consequences, such as her weight skyrocketing to 90 pounds, and this leaves her no choice but to detransition.

Dr. Seuss falsely implies that the birdie hormones that Gertrude takes are life-threatening, when in fact they’d be life-saving for someone with debilitating dysphoria. Although weight gain is one of the most common side effects of hormone replacement therapy, it’s comparatively minor, and it isn’t a reason to detransition. Uncle Doctor’s distasteful “I told you so” moment reflects the way in which unsupportive people use any and every adverse side effect to dismiss dysphoria or the need for transition. In reality, experiencing side effects is part of the process, and a smooth, overnight transition is just an unrealistic expectation that someone like Gertrude would have been informed of by a responsible medical professional.

But instead, Dr. Seuss portrays Gertrude plucking out all her feathers out of regret. And after a period of three weeks, Gertrude has detransitioned to the girl-bird she was before. It’s extremely unrealistic that all of a sudden Gertrude would now be happy with the original tail she has spent her whole life uncomfortable with, and that her dysphoria would simply disappear. There are in fact individuals who do decide to detransition later in life, but for reasons unlike Gertrude’s. In most cases, it’s because they didn’t have a personal or professional support network or the proper means to fully figure out who they are. In Gertrude’s case though, it’s clear that she has been struggling with dysphoria for quite some time, and she took a responsible route to transition under safe supervision.

“That one little feather she had as a starter. But now that’s enough, because now she is smarter.”

By saying “now she is smarter” because she detransitioned, Dr. Seuss is suggesting that Gertrude had been foolish for expressing symptoms of dysphoria and wanting to relieve them for the sake of her happiness and wellbeing. This entire ending is where Dr. Seuss goes wrong. It’s wrong to suggest that in the context of dysphoria, the grass will never be greener on the other side.

So here is how Gertrude McFuzz’s story should’ve ended:

But finally she was healed.

Through the highs and the lows, like a rollercoaster ride,

Gertrude pushed through. Now she beams with pride.

It was a new change that took some care.

She even had a weight-gain scare.

And even though some girl-birds mocked her,

She was thankful for the help of her great doctor.

She lived her truth every day.

She could fly around in a comfortable way.

It was easy to fall asleep at night,

Since she had a tail that fit just right.

Gertrude’s realization and transition is a triumph of her identity. Her difference isn’t wrong or regrettable, it’s what made her her.

If you or someone you know is struggling with gender dysphoria, visit The Trevor Project or GLAAD for support and resources. For crisis situations, dial the TrevorLifeline at 1–866–488–7386, or text “START” to 678678 to be connected with a Trevor Counselor 24/7.

Children are like little sponges, and there’s no arguing that education opens minds. In the third grade, the novel Charlotte’s Web by E.B. White did exactly that, inspiring me and the rest of my 8-year-old classmates to become vegetarians.

An Updated List of the Top 5 Party Schools in the U.S. (According to How They’re Handling the Coronavirus)

19 of the 25 worst U.S. coronavirus outbreaks are in college towns, so if applying to party schools is the top priority of your college search, you’ll want to jot these ones down.

Reading the Grinch as Gay to Piss Off Dr. Seuss

If you think I’m about to ruin your childhood by reading the Grinch as gay character, you’d be even more disappointed to discover the truth about Dr. Seuss. Did you know that The Cat in the Hat was based on blackface performance, and that The Sneetches was originally written as an anti-Semitic narrative? Did you know that And to Think That I Saw It on Mulberry Street, originally published in 1937, was undergoing revisions by Random House until 2017, due to the breadth of its bigotry in both text and illustrations?

Reading ‘Horton Hears a Who!’ as a Gay Dad to Piss Off Dr. Seuss

This is part three of a series where we reclaim the problematic narratives of well-known Dr. Seuss books. From exoticism to blackface, Dr. Seuss’ bigotry was implicitly reflected in the storylines, messages, and illustrations of the children’s books that we have been reading for generations.

7 Cocktails to Overcome Writer’s Block, Based on the Favorite Drinks of Famous Authors

I used to believe that I couldn’t possibly churn out a good piece of writing unless I was doing so in a coffee shop in between sips of iced coffee. That was until the coronavirus caused the closure of my local Starbucks, and I was forced to set aside my Basic Bitch of a habit and drink coffee at home like a normal person. This led me to the life-shattering realization that it wasn’t so much the atmosphere as it was the drink that fueled my creativity.

It doesn’t come as a surprise that a growing number of today’s bestselling books were originally written as fanfiction. Fifty Shades of Grey by E.L. James was originally Twilight fanfiction, The Mortal Instruments series by Cassandra Clare was based on the Harry Potter novels, and After by Anna Todd was first published on Wattpad in the #OneDirection category. But writing fanfiction hasn’t always been a practice reserved for contemporary authors of beach reads and YA novels. Did you know that one of the greatest literary works of all time, Dante’s La Divina Commedia, written over 700 years ago, was actually a “Rated M for Mature” three-part fanfiction?

Every day in high school, as soon as the dismissal bell rang at 3 o’clock, I’d gather my belongings from my locker and head to the computer lab or the school library to do my homework.

Reading ‘Green Eggs & Ham’ as an LGBT Narrative to Piss off Dr. Seuss

The truth is, no matter how much you love his books, Dr. Seuss had a misguided approach to teaching life lessons about tolerance, individuality, and standing up for what you believe in. Many of the most beloved Dr. Seuss stories, that have been read to generations of children, are actually peppered with problematic subtext:

What Would Oscar Wilde Think of Harry Styles?

Would his gaydar be going off? Would he frown upon the new hedonism of the Watermelon Sugar music video?. There’s no doubt that Oscar Wilde, whose work is heavily influenced by the philosophies of aestheticism, would have something to say about Harry Styles, the singer whose evolution embodies Wilde’s idea that “Each of us has heaven and hell in him.”

Why You Should Always Go Running Outside in the Summer

Back in March, as many others have done, my gym closed its doors due covid-19. I was left to fend for myself, alone in the Arizona desert, far away from the reliable confines of a 24-hour gym. Regardless, the gym still had the nerve to charge me the same monthly membership fee, in exchange for “The chance to win a $100 Amazon gift card every month, as incentive to exercise,” which by the way I still haven’t won.