A Few Days Ago, A 'Man' Savagely Beat a Woman. Apparently, She Had The Audacity to Ignore His Advances. (Opinion) 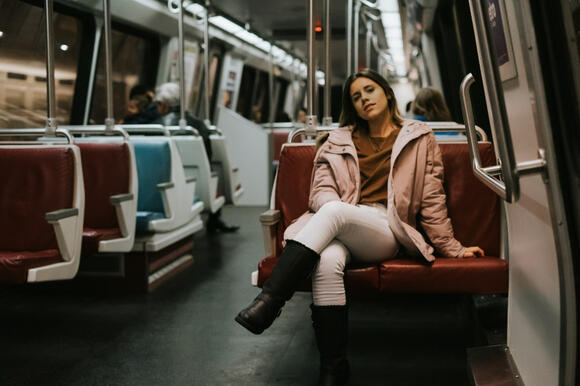 A few days ago, at the Howard Beach train station in Queens, NY, a 33-year-old woman was savagely beaten about the head and body by a man after she reportedly ignored his advances on the train.

The horrendous beating was all caught on tape.

Police have since arrested the “man”, 41-year-old Waheed Foster, for the brutal beating. I use the term ‘man’ extremely loosely as no man would beat a woman selfishly!

Only a wild animal and a coward would treat another human this way much more a female.

According to Eyewitness news reports, the beating happened around 5:15 a.m. on Tuesday, September 20, at the Howard Beach-JFK Airport station.

Authorities say a 33-year-old woman was approached by a man who tried to start a conversation and then followed her as she left one train on her way to another that would connect to her workplace.

Being so early in the morning, no one else seemed to be close by.

When the woman did not respond and ignored the advances, police say the man grabbed her from behind and dragged her across the floor of the mezzanine, slamming her into the wall. The beating then commenced, as he repeatedly pounded her with his fists and kicked her about the face and body.

And imagine that this is a large angry man with testosterone to a boiling point.

Another man who was present at the time tried to intervene but quickly ran away himself when the brutal attacker chased him off, leaving the woman alone as she received round two of the brutal assault.

After the wannabe helper ran off, the male returned to the woman and continued to beat her senselessly, kicking and punching her in the head repeatedly. After some time, he seemed satisfied with the a$$ whopping he gave her and simply walked off, leaving her wounded and bleeding all over the station floor.

Elizabeth Gomes, a security officer herself raises questions as to how effective females can ever be when confronted with a savage male.

Per additional reports, the male attacker is a career criminal who killed his 82-year-old foster grandmother at the tender age of fourteen by brutally assaulting her. She then lay in her chair and died shortly thereafter.

At 21 years old, he stabbed his sister with a screwdriver. He then attacked other residents at a psychiatric hospital.

With such a brutal violent history, how and why is this male person free?

Reports say he was paroled last year — well what do you think, should he ever see the light of day again?

A man so brutal with so much history of violence against others, why is he free?

How could this man have been paroled?

Since so much violence became a common occurrence on the subways, there were promises to increase police presence, yet there appeared to be none the day this passenger was almost killed.

Please do share your thoughts, I would really love to hear what you think of the state of the world today.

In Austin Texas, a 38-year-old man stands accused of giving his wife medicine known to cause abortions. According to news reports, the wife stated that her husband from whom she was estranged when she became pregnant, began lecturing her about the importance of staying hydrated during pregnancy and began ensuring he offered her glasses of water.

Being Born With More Than One Pupil in Your Eye

This World is an amazing place. There are so many new wonders to behold that try as we may one could never know of them all. One such extraordinary creation is expressed in the people born with two or more pupils in one eye. With this variation of genetic expression, this condition may manifest itself in varying numbers of ways.