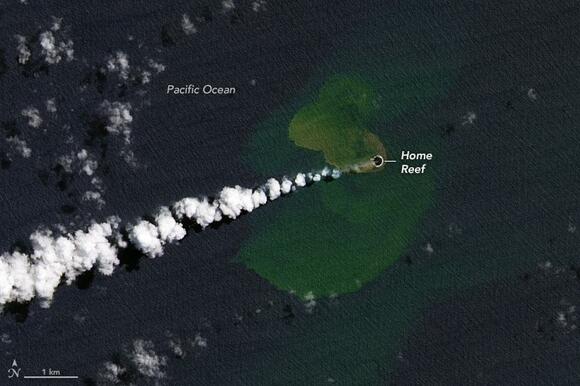 This past 10th of September, the Home Reef underwater volcano gave birth to a new island.

The 6-acre baby, born in the Pacific Ocean has changed the geography of the earth. Her birth was captured from space.

Precipitated when the Home Reef underwater volcano in Tonga began rumbling to life.

The seamount began discoloring the surrounding water as it gushed lava, spewing steam and ash, Nasa’s Earth Observatory reported in its blog post. Hours later the eruption began, a new volcanic island emerged from the water.

In the southwest Pacific Ocean, a seafloor ridge that stretches from New Zealand to Tonga has the highest density of underwater volcanoes in the world. On September 10, 2022, one of them awoke. In the days since, the Home Reef seamount in the Central Tonga Islands has repeatedly oozed lava, ejected plumes of steam and ash, and discolored the surrounding water.

Eleven hours after the eruption began, a new island rose above the water surface. The Operational Land Imager-2 (OLI-2) on Landsat 9 captured this natural-color view of the young island on September 14, 2022, as plumes of discolored water circulated nearby. Previous research suggests that these plumes of superheated, acidic seawater contain particulate matter, volcanic rock fragments, and sulfur.

On September 14, researchers with Tonga Geological Services estimated the area of the island to be about 1 acre with an elevation of 33 feet above sea level. But by September 20, the island had grown to cover 24,000 square meters or 6 acres.

The new island is located southwest of Late Island, northeast of Hunga Tonga-Hunga Ha‘apai, and northwest of Mo‘unga‘one.

According to NASA’s blog, these newly formed islands may stay temporarily and be washed away in as little as two months while others remain for years to come.

This is not the first time Home Reef eruptions have caused the phenomenon. The volcano has had four previous periods of eruptions. Islands formed after eruptions in 1852 and 1857. Eruptions from 1984 to 2006 also caused islands to form, although these were very fleeting.

Whether this baby island is meant for a short visit or to stay awhile, one thing is certain, we live in an amazing world.