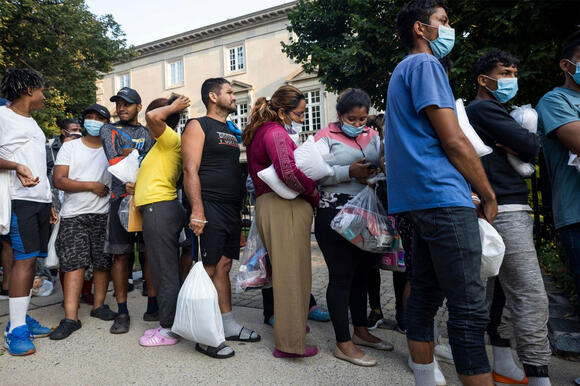 Migrants waiting in the street ---aazoopark.com

Per MSN, U.S. border agents have made nearly 2 million migrant arrests through August at the U.S.-Mexico border this fiscal year, which began last October.

They include a growing number of Cubans, Nicaraguans, Venezuelans, and others who cannot be expelled to Mexico under a public health order in place since the beginning of the COVID pandemic.

Many seek to pursue asylum claims.

As most of us are aware, a substantial number of those migrants were being bused to New York, Washing, and Chicago. Recently some were sent by plane to Martha’s Vineyard.

The migrants sent by plane voiced their disappointment and confusion at being tricked into reaching the well-to-do town. They said they were offered help and were initially approached by a woman using only her first name.

Florida’s Governor DeSantos then took credit for sending the migrants to Martha’s Vineyard. Now a Texas county sheriff has begun a criminal investigation into the flights.

Bexar County Sheriff Javier Salazar said at a news conference on Monday that around 50 migrants were “lured under false pretenses” on the streets of San Antonio, put up in a hotel, bused to planes, and “stranded unceremoniously in Martha’s Vineyard,” a wealthy vacation island, “for nothing other than a photo op.”

San Antonio is the biggest city in Bexar County.

“What infuriates me most about this case is that we have 48 people who are already in hard times,” Salazar said. “I believe they were preyed upon.”

Salazar, a Democrat, said his move was not related to his party affiliation. “It’s wrong from a human rights perspective. What was done to these folks was wrong.”

Salazar said his office was working with advocacy organizations and private attorneys representing the victims and could coordinate with federal authorities as needed.

DeSantis joins Republican governors from Texas and Arizona in sending migrants to Democratic-controlled cities, including buses of migrants from Texas dropped off near the residence of Vice President Kamala Harris in Washington.

DeSantis said last week that Florida paid to fly the migrants to Martha’s Vineyard because many migrants who arrive in Florida come from Texas.

The Biden administration has been outspoken in its stance that the Republicans are using migrants as “political pawns.”

While details of how the flights were arranged and paid for remain unclear, one migrant told Reuters he and his family were recruited outside of a migrant resource center in San Antonio and promised housing, support for 90 days, help with work permits, and English lessons. He said they were surprised when their flight landed on an island best known as a summer retreat populated mostly by affluent, liberal Americans.

What do you think will be the findings of the investigation?

In Austin Texas, a 38-year-old man stands accused of giving his wife medicine known to cause abortions. According to news reports, the wife stated that her husband from whom she was estranged when she became pregnant, began lecturing her about the importance of staying hydrated during pregnancy and began ensuring he offered her glasses of water.

Being Born With More Than One Pupil in Your Eye

This World is an amazing place. There are so many new wonders to behold that try as we may one could never know of them all. One such extraordinary creation is expressed in the people born with two or more pupils in one eye. With this variation of genetic expression, this condition may manifest itself in varying numbers of ways.

If there is one surety in life, it is that we live in an amazing world. I came upon this interesting phenomenon: a tribe of people called the Vadoma people. A person whose feet vary from the norm. They are not the only ones who possess these unusual and unique features.

The Winning Lotto Ticket Was Sold in California (Opinion Piece)

There is a brand-new billionaire, overnight. According to the media, one lucky winner has bested us all to win the jackpot!. I must confess that I am no lottery player, I prefer to keep my few dollars in my pocket as I don’t like to gamble. But even I was caught up in the lotto fever. I actually spent about $20 buying tickets in the hopes of winning.

A 29-year-old New York Emergency Medical Technician who stole a patient’s credit card from her home per reports, now finds himself in very hot water. The incident occurred on August 8th when the 79-year-old female required assistance as she was unwell and he was called to transport her from her Springfield Gardens home to the hospital.