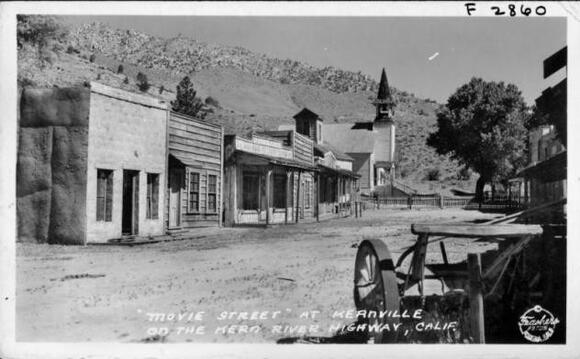 Approximately 35 miles northeast of Bakersfield, California, the bustling town of Old Kernville once thrived. Reportedly named Whiskey Flat, the town had reportedly come into being towards the end of the Gold Rush of the 1860s.

Located at the hills of Lake Isabella and the Kern River, Whiskey Flat got its new name following a massacre of the local indigenous tribes in 1863. During the massacre, it is said that 70 settlers killed Native Americans and forcibly exiled hundreds more.

According to AccuWeather and news.yahoo.com, all is not lost, it is said that…

When the waters of Isabella Reservoir are low enough, some of the remnants of Old Kernville are exposed and appear as tombstones. The elementary school and the old Methodist Church foundations are the most prominent features left from those years.

A walk through the ghost-like surroundings fills one with magical visions of what it once was as a piece of pottery shard is discovered. An old metal pipe is sticking up from the lake bottom, a piece of rock wall appearing lost in the silt or maybe even a rusted bolt or faucet catches one’s eye.

History continues even though it appears to be gone.

Old Kernville appears to be taken right out of a Western movie — once it served as the backdrop for many classics, featuring the likes of John Wayne, Gene Autry, Hopalong Cassidy, and more.

While all of Hollywood glamour has long since been gone, one might not have ever guessed it was once completely underwater and has now mysteriously resurfaced.

“There were people here. There was life here. It survived explorers, massacres, gold rushes, massive floods, and tourism,” the Sierra Nevada Business Council wrote on its website. “But it could not survive progress and now sits in silence with very little to let one know that it was even here.”

Imagine the shock of the residents of the Kern Valley, when they were told their homes were in the way of a new lake and they had to find a new home and make new roots.

According to the laws of eminent domain, the residents were forced to vacate their homes to make way for the lake.

Old Kernville now lies at the bottom of the Isabella Reservoir.

And sometimes like now, when the rains have ceased their flow, the remnants make themselves visible…

We have all heard stories of drugs being smuggled into the USA, but to the dealers’ nothing is sacred. Not your life or the life of your precious children. Their more recent hiding place —  your children’s Lego toys.

A mother in Tennessee is in critical condition today and her two children are dead. Mauled and killed in their home by their family dogs. The children, a 2-year-old girl, and a 5-month-old boy were attacked inside a home on Sylvan Road at about 3:30 p.m. on Wednesday, October 5.

Female Miscreants in New York. The 'Green Goblin Gang' in the Subways.

A group of six females dressed in neon green has been the recent topic of conversation and fear in New York City recently. On Sunday at approximately 2 a.m., according to news reports, this group of females allegedly assaulted and robbed two teenage girls.

Cory Hardrict and Tia Mowry (seen in 2020) appear to have a prenuptial agreement in place in their divorce filing.(Aaron J. Thornton) -- Fox News. According to reports by Fox News— Tia Mowry formerly of Sister Siter has filed for divorce from her long-time spouse of 14 years.

Weekend storms flooded a proposed location for a 1,000-migrant tent city in The Bronx.© Jeff Edwards. New York’s migrant ‘tent city’ will be relocated to Randall Island amidst push back from Bronx residents.

Bronx Residents Angry at New York's 'Tent City': They Feel Like Prisoners in Their Neighborhoods!

New York's so-called tent city --NY Mayor's Office. As the buses of migrants keep arriving in the big apple, the city has been forced to think outside the box to find suitable housing.

What Do Sharks Do During Hurricanes and Storms?

Interesting fun fact: Did you know that sharks spend their summers in the north and winters in the south?. Have you ever wondered what happens to the creatures of the deep during storms and hurricanes? So apparently have scientists. They have been tracking their movements during the recent display of Fiona’s mighty power.

The Legend of the Loretto Staircase: Who Was its Mysterious Builder?

As reported by Fox News, at the Webb County Medical Examiner’s Office in Laredo Texas lies a number of dead migrants. The small morgue, located along the southern border, has recently become one of the busiest. With each new day, there are more often nameless bodies being brought in. The staff says they are overwhelmed.

A Few Days Ago, A 'Man' Savagely Beat a Woman. Apparently, She Had The Audacity to Ignore His Advances. (Opinion)

Young woman sitting alone on a train ---Tatiana Rodriguez UnsplashAnger on the subways. A few days ago, at the Howard Beach train station in Queens, NY, a 33-year-old woman was savagely beaten about the head and body by a man after she reportedly ignored his advances on the train.

In a Belk department store in Columbia, South Carolina, a 63-year-old janitor lay dead inside. Store surveillance saw the elder employee entering the bathroom. Her cleaning cart was still outside the bathroom stall.