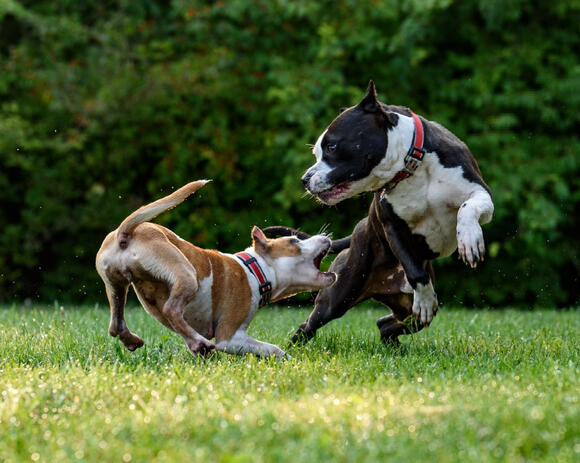 One brown and white and black and white dog snarling at each other.Photo by David Taffet on Unsplash

I was bitten by a dog as a child.

So, I was mortified when I learned of the horrific way the postal worker lost her life.

Five dogs fatally wounded a mail carrier for the U.S. Postal Service in Putnam County Florida after her truck broke down along the side of the road.

Sheriff deputies were called to the scene and there found the woman lying on the ground in Interlachen Lake Estates. They also found the dogs inside a fence at a nearby home.

Neighbors said they had informed the owner numerous times in the past that the dogs were a nuisance, but reported that no improvements had been made to keep the dogs secure. More assertive action on the part of the owners could have saved this poor woman’s life.

Police confirmed that there had been previous responses including law enforcement and animal control to the address of the owners within the past three years, though they could not confirm if the calls involved the same dogs.

This is such a sad thing to happen. This woman was just doing her job. Per reports the owner was negligent in the ways they cared for their animals, allowing them to be loose and thus able to attack that poor woman.

Authorities state the owner is cooperating but may end up facing charges.

It is a sad story; the postal worker is dead and the dogs will have to be put down.

Condolences to her family.

PVC cross signifies where migrants are laid to rest --TikTok. At the Webb County Medical Examiner’s Office in Laredo Texas lies a number of dead migrants. The small morgue, located along the southern border, has recently become one of the busiest. With each new day, there are more often nameless bodies being brought in. The staff says they are overwhelmed.

A Few Days Ago, A 'Man' Savagely Beat a Woman Who Had The Audacity to Ignore His Advances on The New York City Subway

Young woman sitting alone on a train ---Tatiana Rodriguez Unsplash. A few days ago, at the Howard Beach train station in Queens, NY, a 33-year-old woman was savagely beaten about the head and body by a man after she reportedly ignored his advances on the train.

In a Belk department store in Columbia, South Carolina, a 63-year-old janitor lay dead inside. Store surveillance saw the elder employee entering the bathroom. Her cleaning cart was still outside the bathroom stall.

Drought uncovers flooded ghost town after more than 50 years© Provided by AccuWeather. Approximately 35 miles northeast of Bakersfield, California, the bustling town of Old Kernville once thrived. Reportedly named Whiskey Flat, the town had reportedly come into being towards the end of the Gold Rush of the 1860s.

Tomato and coconut fish stew on a bed of white rice --image credit: author. I did not always love cooking my food, but recently I have developed quite a love of cooking. I always watched cooking shows. My daughter, now 18, was a babbling toddler when I watched cooking shows with her.

After Blasting Governor Abbott About Sending Migrants to Chicago Without A Warning, Mayor Lightfoot is Accused of Same

A bus that usually drives passengers from state to state --Photo by Ant Rozetsky on Unsplash. Last week the first bus of migrants was sent to Chicago on the orders of Texas Governor Greg Abbott.

Hot In Sacramento: The Heat Index at 116° -- More Than 50 Million Under Heat Advisory

Fire hydrant splashing water on a hot day ---Photo by John Angel on Unsplash. Californians are on high heat alert. For over two weeks now, they have been facing power outages in the face of extreme heat. They are slowly being baked alive. Due to the extreme temperatures, the power grid is giving up the ghost.

ShiftMed - A New Way To Staff Healthcare Shortage. A Boon For Workers and For Those Needing Care

A healthcare professional with a stethoscope ---Photo by Alexandr Podvalny on Unsplash. COVID came and changed the order of things. Healthcare workers were thrown front and center. Many died and many have left the industry.

White mounds on the shoreline of the Utah Salt LakesImage credit — The Associated Press (Pic of the Great Salt Lakes) Utah's Park rangers are wondering what are those wide cloud-like mounds popping up along the Great Salt Lakes shoreline. Reportedly, the rangers are concerned, especially since no one seems to know exactly what they are and why they keep showing up there.

Billionaire Heiress, Eliza Fletcher, Murdered. Will Women Ever Truly Be Able to Go About Their Lives in Peace?

Alleged murderer and his victim, billionaire heiress Eliza Fletcher ---Image credit: Poochtimes.com. Will you ever really be free to do what you want, need, or desire?. Or shall women always live with some degree of fear?

Migrants Are Literally Dying To Enter The US: More Migrants Die Crossing The Rio Grande

Many migrants risk everything in their quest to enter the borders of the United States. They put the lives of their children and their most precious possession, their lives. All undertake the journey hoping to make it onto the other side of the Rio Grande, but sometimes the end is not what they envisioned.

According toNBCDFW news, 64-year-old former Athens Mayor, James Montgomery, is charged and could be sentenced to up to 10 years in prison on a charge of sending sexually explicit and obscene materials to a minor.