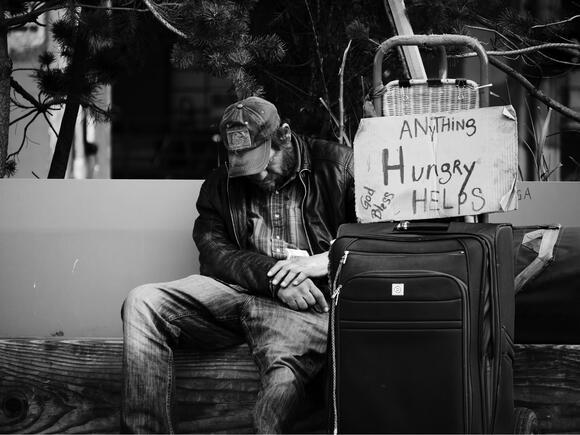 The Orlando economy was hit hard by the Coronavirus pandemic. The United States Bureau of Labor Statistics recorded Orlando's unemployment rate at 6.9% in December of 2020. That represents a nearly 300% increase over the December 2019 rate.

Before the pandemic began, Orlando was facing an already-high poverty rate. Determined by the annual Department of Health and Human Services (HHS) Poverty Guidelines, the US Census Bureau asserted 17.2% of Orlando residents were living in poverty between 2015 and 2019. With high unemployment levels, it's excepted the next Census report will show an increase in local poverty.

Food insecurity was estimated as high as 23% across the country in 2020. Following that estimate, roughly 66,111 of Orlando's 287,442 residents had difficulties sourcing a meal last year.

While the Orlando economy continues to struggle under the weight of poverty, homelessness, and unemployment, the Christian Service Center is providing food to those in need. With over 50 years of experience serving Central Florida, the Christina Service Center will see Orlando through the current pandemic and continue providing vital services to those in need for years to come.

Photo by Steve Knutson on Unsplash

While shopping local and supporting independent restaurants is essential every day, #407Day encourages Orlando residents to enjoy the local culinary fare. Named for the Central Florida area code (407), the Orange County government launched the campaign last year to support the financially strapped local economy. Due to coronavirus restaurant restrictions, the inaugural celebration was limited to take-out, delivery, and curbside pickup options. This year, restaurants are also offering dine-in options for those interested.

Level Up Your Productivity Through Budgeting

Confession time: I like to be in control. It’s not an overbearing thing, but my anxiety moves in when I lack options. To maintain control, I crave spreadsheets, numbers, and data. Information leads to choices, and options bring control.

We Showcase Our Identity, But Who Are We Really?

“I saw your post on LinkedIn,” my boss said the other day. It was the last day we were in the office together before moving remote for the next month or two. “You were in some documentary? Who even are you, Justin?”

Want to Be Successful? Move Beyond the Reef.

I walked into the living room the other day, and my wife was asleep on the couch. Moana, a 2016 movie we’ve seen a million times, was playing in the background. I sat down on the sofa for a round of sudoku but was quickly captivated by the charming film.

Don't Be a Dick: Give Advice Without Being Negative

At the 2007 Penny Arcade Expo Wil Wheaton delivered a rousing keynote speech about sportsmanship in online gaming. “I’m feeling like a cranky old man by even mentioning it,” he said. “But would you all do me a favor? When you’re playing online, have fun, and don’t be a dick, okay?” The phrase caught on.

During the fifteen years I worked with teenagers, I often encountered kids who had their whole lives planned out. I’d let them explain it all to me — what classes they’d take in high school, what college they’d get into, what degree they’d earn, and what job they’d get after that. I’d listen, smile, and respond, “What if none of that happens?” Responses ranged from blank stares to combative denial.

Last week I watched High Score on Netflix. It’s a six-part docuseries on the history of video games. For most of the episodes, it was a walk straight down Memory Lane. The first video game I remember playing is Duck Hunt on the original Nintendo Entertainment System. Pulling the trigger on the plastic gun came with a very loud click, following a few milliseconds later by the screen flash. Then, after three shots, the dog would pop up and laugh at you. It was revolutionary.

Cooking fascinates me. Ok, let’s be honest, food fascinates me. Cooking is the means to get to the food. Though, I do enjoy cooking. The process engages a different form of creativity from my usual writing.

Breathe in. Breathe out. Move on.

Earlier this week, I woke up with Jimmy Buffett’s Breathe in. Breathe out. Move on. in my head. The song was written in response to Hurricane Katrina’s devastation in New Orleans. I woke up with its titular phrase on repeat like a mantra.

I Bought A Selfie Ring Light

I bought a selfie ring light over the weekend. It’s an inexpensive thing that clips on your phone and provides better lighting for pictures. The $14.99 it set me back isn’t a hefty price, but I’m questioning the life choices that brought me to this moment.

How Do You Measure a Year?

Seasons of Love, the opening song to Broadway’s Rent, is one of the most popular musical numbers of all time. The show follows a group of friends living through the AIDS pandemic in the late 80’s New York City. The opening song, reprised multiple times throughout the show, proclaims the ups and downs of a year spent together.

Some Like It Hot: The Eternal Flame at Gideon's Bakehouse

Gideon's Bakehouse is known for unique cookie creations inspired by a 123-year-old cookbook. The half-pound mounds of flavor-filled sweetness are not only delicious but a sight to behold.

Living in Florida, our seasons consist of summer and slightly cooler summer. Fall is when the humidity drops low enough to open a window. This usually occurs sometime in November.

Bagels are the breakfast bread of choice for office gatherings. In the various offices I’ve worked in over the years, they just short of appear out of thin air from time to time, ready to be consumed. If I’m being honest, I’m not a huge fan. They are typically chewy and hard to rip with my teeth. I eat them only because they are available and I have zero willpower. And I’m a sucker for honey-nut cream cheese.

A few years ago I found myself in Nashville for a conference. The functions ended on Saturday night but my flight home didn’t leave until late Sunday. I had a day to myself and went exploring. My hotel was in Brentwood so I drove through the neighborhoods and marveled at the insane variety of McMansions before heading downtown.

The attendant walks my wife and I to our individual pods. She places our bags in the enormous overhead bins and smiles as she goes to welcome the next passengers. My wife and I share a look of excitement.

What is this wonderful combination of food? And what is a cuttlefish?. Our first day in Japan, my wife and I visited the amazing Himiji Castle west of Osaka. The castle was built in the fourteenth century by people used to walking everywhere. Living in the suburbs of Florida, I am not conditioned to walking everywhere — let alone at elevation. We arrived back in Osaka with tired legs and jet-lag induced hunger.