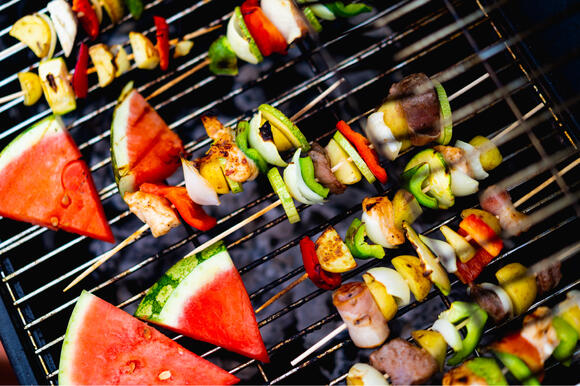 Food is something that unites all Rhode Islanders. Chances are, regardless of your taste, you'll find several options in the state, including Mexican, Italian, and ice cream shops. Grilled meat is one of the most comforting foods you can eat, so let's see what Little Rhody can offer you.

Today Rhode Islanders have a wide range of barbecue options, but that wasn't the case when Becky's Real BBQ opened its Aquidneck Island pit in 1994. 'Cue lovers from all around the country have been coming to this place for more than two decades. Every piece of meat that goes into the smoker pit is personally handled by owner/pitmaster Bob Bringhurst, who rotates the shelves within so that juices drip from cut to cut during cooking. Slow-smoked pork and beef brisket are pulled, cleaned, and lightly sauced with the shop's vinegar-and-pepper sauce or tangy Kansas City-style sweet sauce (although sauce-free plates can be ordered upon request). We hand-rub ribs and chicken using a proprietary spice blend, cooking them until they are moist and tender.

The Durk's Smokehouse arrived on the Providence scene recently, offering great smoked meats. The crispy kimchi Brussels sprouts, the tangy mac-and-cheese, and that sweet cornbread will be hard to resist.

The draw at Durk's Bar-B-Q is its Texas-style barbecue, fancy sides, and cocktails. With hickory-smoked brisket, ribs pulled pork, and poblano Cheddar kielbasa (Polish sausage), all served with soft, white homemade bread, pickles, and vinegar sauce. There was also a side of bacon-wrapped greens with mac 'n' cheese for good measure.

Mortgage banker turned barbecue enthusiast turned restaurateur turned owner of a 1930s diner, John Hanaway seems to be unstoppable in his quest to reinvent himself.

Johnny and Rhonda joined forces to create Johnny's Victory Diner, which has become a perfect fit for Rhode Island. In the first place, it's still a true counter joint in New England with original breakfast specials and an enthusiastic following. A custom-built barrel smoker sits outside the diner, burning locally sourced oak and applewood for the Friday barbecue nights in which pulled pork, brisket, and ribs are the stars of the show.

If you're tired of the seafood scene in Newport, grab some delicious barbecue instead. The Wood-fired Smoker at Binge is used to smoke all of their hormone-free meats every day. With a biscuit and two types of meat for just $15, you can choose two sides and two meats. Served with coleslaw, baked beans, fried potato wedges, and creamed Brussels sprouts. How about this? It is open until 2 a.m. on weekends!

A perfect menu and friendly service help Binge Barbecue stand out among the many great Newport restaurants.

Smoke House offers some of the best meat in Newport in an open-air seating area along the pier. Ribs that are beautifully smoked and flavorful are prepared with a dry rub. You can top it off with a good red sangria if you want a juicier bite.

You'll be surprised to find Rhode Island has several good barbecue joints, including pulled pork sandwiches and Chinese barbecue. Try the best barbecue in the Ocean State at these mom-and-pop, market-style restaurants, or grab a quick bite from a barbecue truck!