Brennon is the talent behind Just Brennon Blog; a fun lifestyle blog created in 2014 to inspire people to be happy and live their best lives possible. Brennon specializes in travel across the United States. As a writer on NewsBreak, her goal is to do the same.

Reasons To Make Ohio Your Next Travel Destination 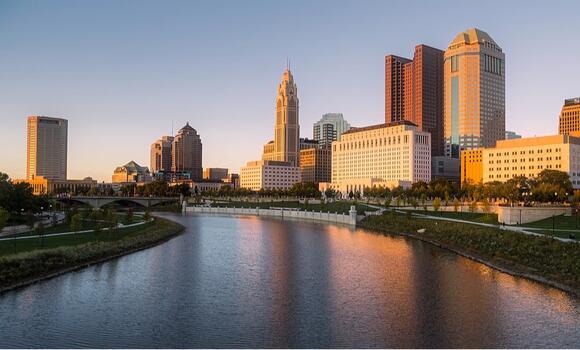 There are so many states to visit in the United States that choosing which one can actually be kind of intimidating. Because of this, a lot of the time people end up just going for the most obvious and popular states such as New York or California. However, many of America's lesser-known states have huge amounts to offer the more discerning traveller.

It really all depends on the kinds of things that you're looking for, whether it's history, culture, nightlife, shopping, or natural beauty. However, if you want somewhere that combines all of those things together, then Ohio may be the perfect place for you! With that in mind here are just a few reasons to make Ohio your next vacation destination!

If you're the outdoorsy type who loves nothing more than being able to get out into nature, then Hocking Hills State Park is perfect for you. With miles of trails to walk along and beauty to see all along the way, places like Hocking Hills are the best possible way to get away from the hustle and bustle of city life.

Another amazing park is the Highfield Discovery Garden at Glenwood Gardens. A few years back, on Super Bowl Sunday, my son and I took a day trip to see a few of Ohio’s hidden gems which not only included the Highfield Discovery Garden, but also included Jungle Jim’s International Market. Both of these are conveniently located in Cincinnati - which brings me to the beautiful cities of Ohio.

Of course, if the excitement of city life is what you're after then Ohio has you covered there, as well. Cleveland and Cincinnati are the most famous of Ohio's cities. One of the places I can’t wait to visit in Cincinnati is the American Sign Museum. The American Sign Museum is proud to be the largest public museum dedicated to signs in the United States. It reminds me a lot of the Neon Museum in Las Vegas, Nevada.

Aside from the larger cities, however, there are plenty of other amazingly vibrant places to spend your time as well.

Places like Wilmington have a lot to offer you, as well. For example, spending the night in the Holiday Inn at Roberts Centre allows you to spend your day exploring this great city filled with local history and culture. Just because you're not in the biggest cities in the country, doesn't mean that there aren't things to see and experience. You won’t be disappointed!

Not only do you have parks and cities to enjoy but the islands are right on your doorstep, as well!

Did you know? The small town of Put-In-Bay might not be particularly large or well known, but it's gaining a reputation as an amazing tourist destination thanks to being home to one of the largest hotels in the world, as well as many historic sites like Perry’s Cave.

Perry's Cave, a Natural limestone cave steeped in historical tradition, is fun and educational for the whole family. It’s an important spot during the war of 1812 and the location of an amazing hidden lake.

Lastly, there are so many colleges and campus towns to explore - especially if you have a child that is looking to get a feel for the campus life. Take for example, Miami University. I took my little brother for a college visit when he was exploring colleges.

We left Illinois at approximately 7:30 AM on Friday morning and arrived in Oxford, Ohio sometime around noon. I don’t even remember looking at the clock much. The skies were clear and it was a beautiful day to be road-tripping.

Oxford, Ohio is a small city which lies in northern Ohio, less than an hour from Cincinnati. The town was founded as the home for Miami University students and has also ranked as the “Best College Town” in the USA according to Forbes.

Once we arrived, we were awed by such a beautiful campus. It was also pretty packed, from guys walking in single-file lines for fraternity pledging all the way to the many Freshmen Orientations that were happening.

So, instead of doing a lot of walking, we opted for driving around the campus, so that he could get somewhat of a feel for the college and decide if he wanted to move forward with a scheduled visit and orientation.

One of the only downfalls from this visit was that we didn’t stop long enough to get any beautiful photos of the campus. And, the one window photo I do have does the campus any justice.

Aside from Miami University, Ohio is home to both public and private colleges and universities, and several are located in the major cities of Cleveland, Cincinnati and the capital, Columbus. If you didn’t know, the state's flagship school is Ohio State University—Columbus. It is one of the largest universities in America, enrolling more than 43,000 undergraduate students annually.

One of the wonderful things about many of America's slightly lesser known states is that they often have far smaller crowds of tourists than larger places like New York or California. That means that not only do you get to experience plenty of amazing culture, and history, but you get to do it without being constantly crowded and jostled by a dozen other tourists - all trying to do the exact same thing.

So don't be afraid to go off the beaten path a little bit and explore all of the other amazing things that the USA has to offer.

Brennon is the talent behind Just Brennon Blog; a fun lifestyle blog created in 2014 to inspire people to be happy and live their best lives possible. Brennon specializes in travel across the United States. As a writer on NewsBreak, her goal is to do the same.

Have you signed up for Crane Alley’s Worl Wide Beer Tour? If not, add this to your weekend bucket list, especially if you are a beer enthusiast. Earlier this year in August, we began our Crane Alley World Wide Beer Tour. If you are unfamiliar with the tour, here’s what you should note.

After moving and settling into a new routine, it’s been extremely important for me to intentionally practice self-care. But what is self-care? We hear about it all the time, but what exactly is it? No one tells us what it is or how to do it.

Chana Masala: Just One of the Reasons Why You Should Visit Kohinoor Indian Restaurant and Lounge

Kohinoor Indian Restaurant and LoungeBrennon Hightower. A few months back, I enjoyed an Indian Curry dish from a local bistro. The dish consisted of Curried Chickpeas, Rice, and Naan. While it was a delicious dish, it was not an authentic dish. Therefore, I quickly craved the dish authentically.

Three Places to Enjoy Pizza By the Slice in Champaign-Urbana

Enjoying a slice of pizza is something so many people enjoy. Many times, people don’t even want an entire pizza, they simply want a slice. If this sounds like you, keep reading for three places to enjoy pizza by the slice in Champaign-Urbana.

As I move about the community, I have the honor of meeting a variety of local freelancers and business owners. In our interactions, I am able to learn a lot about the scope of their work.

The Priebe Pumpkin Patch is Open for the Fall 2021 Season!

Autumn has officially arrived and so many of us are ready for fall festivities. If this sounds like you, you may want to add Priebe Pumpkin Patch to your Fall Bucket List this year.

Monday is National Taco Day! Did you know that last year Americans ate over 4.5 billion tacos? That’s right. According to National Taco Day, “that’s 490,000 miles of tacos, which could take you to the moon and back”.

From Game Nights to Day Trips, Fresh Ideas to Connect with Your Kids

Everyday I speak with someone who shares the challenges that they are having with balancing this new normal. Some of us are back in the office and school full-time, while others may not be. Some children are remote, partially remote, or their schools are considering it as an option if the pandemic continues to worsen.

Today, September 29th is National Women’s Health and Fitness Day. So, if you haven’t considered your personal health and fitness goals, today would be a great time to do so. One idea to consider is to use Urbana Park District parks to race your first virtual 5K race!

3 Breakfast Options to Try This Month for Better Breakfast Month

What to Expect Camping at Garden of the Gods

After reading a dozen or more Pinterest pins, there are still some tips left out on what to expect when planning a camping trip to Garden of the Gods in Shawnee National Forest.

How to Plan Your Fall Family Vacation

When my children went to year round school, we would take our family vacations in the fall instead of the summer months. During the fall, the weather is more bearable and it typically tends to be an off-peak season for a lot of attractions. With it being an off-peak season, you get a more crowd-free experience and more affordable prices.

Visit These Fun Tourist Attractions in Champaign-Urbana This Weekend

With fall now in full swing, it’s time to get out and create some intentional fun and memories. With this in mind, below are three fun tourist attractions in Champaign-Urbana worth visiting this weekend whether you are out on a solo day trip or with friends or families.

Here’s How I Show My Family That I Love Them!

Spending Time Together in a Fall Corn MazeBrennon Hightower. Prior to the COVID-19 vaccines, getting to see your friends and families was tough if you didn’t live in the same household. And, even with the vaccines becoming more readily available, there are many people who still have not had the opportunity to spend with their loved ones, making the past few years extremely difficult for maintaining positive relationships with people you love.

The Importance of Having Fun with Your Children

The majority of us go through our lives, taking everything so seriously, and forget to have intentional fun along the way. With this in mind, we as parents may want to teach our children about the need for enjoying life intentionally and having fun.

Head to Urbana Museum of Photography for Save Your Photos Month

The memories that we create in life are such a magical thing, that it’s important to document them and save them. As a matter of fact, it’s so important that the entire month of September has been dedicated to saving your photos. That’s right!

Keep Showing Up for Your Relationship

After taking the free Bending Reality Masterclass with Vishen Lakhiani from Mindvalley, I wanted to take action in my life and commit to something that would benefit my relationship.

Why I’m Always Working on Improving My Parenting Skills

I want my children to grow up to live happy, healthy, and safe lives, so, I’m always working on improving my parenting skills. Why? Because, as parents, we are their first teachers.