See what driving in Downtown San Francisco in 1940 looked like 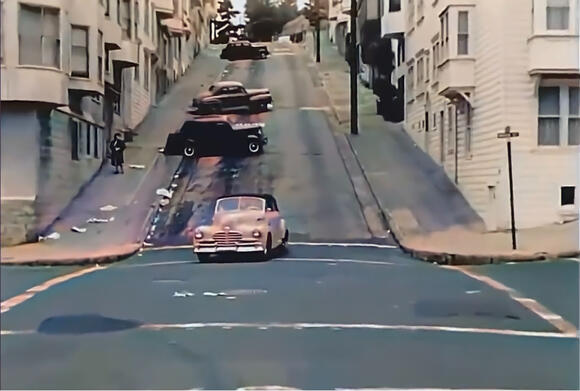 Thanks to a video restoration we can see real footage of how downtown San Francisco looked back in the 1940s.

The video shows how traffic in the city is not a new thing, since 80 years ago San Franciscans already experienced traffic jams.

People can be seen walking and enjoying life on Washington Street—a lot of the streets that still exist today can be seen in full-color thanks to the restoration.

Just a few years before, Proposition 1 would be the city’s attempt to get a new subway on the ballot in November 1937.

The new subway was an important step in improving transportation for San Francisco residents.

Let’s see a little bit of the history behind two of the places that can be seen in the video:

Early in the nineteenth century, this area was home to the Mexican seaside community of Yerba Buena, and the section of Grant Street (then known as Calle de la Fundacion) between what is now Washington and Clay was constructed in 1835, making it San Francisco’s oldest street.

The late 1800s saw residents battle for integration. After 1906, the region was gradually transformed into the popular tourist attraction it is today.

During the early days of the settlement, dock workers unloaded goods as fishermen cast their nets and started selling crabs and fish in shacks along the shoreline.

City dwellers started to visit for the local delicacies and fresh sea air. Although sourdough bread did not originate in San Francisco, its distinctive flavor and style may be attributed to the mid-1800s and the gold rush, when it became quite popular.

The 1950s and 1960s saw a major increase in the area’s commercialization, leaving a cloud of vintage charm from the middle of the 20th century. Pier 39 opened decades later in 1978.

Here you can see the full video where several streets that still exist make an appearance:

Can you recognize any of the streets? Let us know in the comments.